Mythic Get Forfeited For Streaming Their ESL One Cologne 2018 Qualifiers vs eUnited - Dexerto
CS:GO

There has been a major scandal in the CS:GO esports scene as a team has been disqualified for streaming their qualifier match without permission.

Mythic were playing eUnited in the semifinals of the ESL One Cologne 2018 North American open qualifiers when they were forced to forfeit for allegedly violated ESL One rules regarding streaming.

This all began after Mythic defeated eUnited in Map 1 of their best of 3 semifinal series.

ESL admins told the Mythic players that if they did not stop streaming the remained of the match, they would have to be forfeited for violating Rule 2.5 of the ESL One rulebook.

2.5.1 RightsAll broadcasting rights of ESL One are owned by the Turtle Entertainment GmbH. This includes but is not limited to: IRC bots, shoutcast streams, video streams, GOTV, replays, demos or TV broadcasts.

2.5.2 Waiving These RightsTurtle Entertainment GmbH has the right to award broadcasting rights for one or multiple matches to a third party or the participants themselves. In such cases the broadcasts must have been arranged with a head admin before the start of the match. For the necessary contact details please look at point 1.8.1 and make sure any additional broadcast has been approved before the match in question starts. (https://play.eslgaming.com/broadcast)

2.5.3 Player ResponsibilityPlayers cannot refuse to have their matches broadcast by ESL-authorized broadcasts (https://play.eslgaming.com/broadcast), nor can they choose in what manner the match will be broadcast. The broadcast can only be rejected by an admin. The player agrees to make sufficient accommodation so that broadcasting of matches can take place.

The Mythic players did not turn off their streams and thus their team was disqualified as a result, which gave eUnited a spot in the North American closed qualifiers.

Many are of the opinion that this stingy approach to the situation by ESL was actually over a matter of viewership disparity, since the official ESL One stream on Facebook was barely pulling almost no viewers while the Mythic players’ streams had close to 8,000 viewers combined. 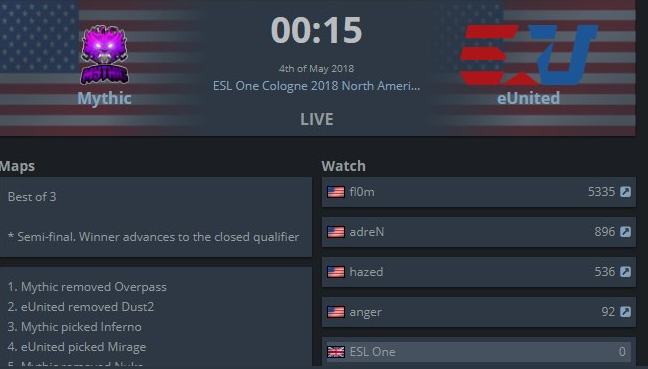 This decision from ESL led to heightened tensions, as players from both Mythic and eUnited started throwing jabs at each other on Twitter.

*Some of the tweets have been deleted since, so we are bringing them to in image form. 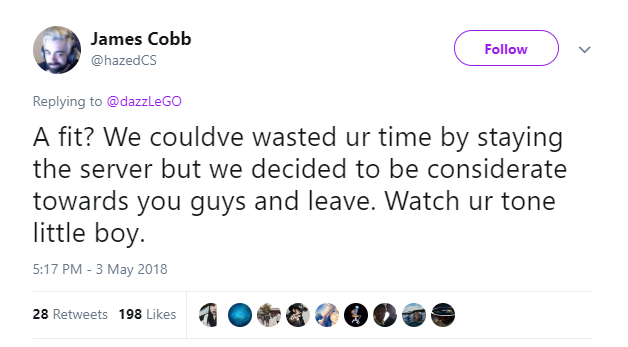 The situation also garnered some negative backlash from the community, with British veteran esports journalist Richard Lewis not holding back on Twitter.

In the tweet, Lewis is referring to a similarly controversial situation which involved Valve not allowing ESL to shut down DOTA 2 streams after several streamers were sent a notice by ESL.

Even Daniel ‘clerkie’ Clerke, the General Manager of eUnited whose team benefited from the decision, was quite shocked by Mythic’s disqualification.