World of Warcraft Classic players have been patiently waiting since the re-release came out for worldwide PvP to actually mean something, and we finally know when it’s happening.

Developers said back in August 2019 that they plan to roll out Classic content in six stages – with the Honor System and PvP rank rewards currently next on the list.

The honor system in WoW basically makes PvP a whole new game by itself, but to put it simply the system is a way to compare every player on the server’s efforts in PvP.

For the first time since Classic launched, PvP will actually mean something.
600[ad name=”article2″]

When is the Honor System coming to WoW Classic?

Developers announced that the system would be coming to Classic on November 12, with Phase Two of the roadmap they laid out earlier in the year.

Most of the World of Warcraft time was spent on the new expansion ‘Shadowlands’, but developers have told us what’s coming in each phase, so we know exactly what’s coming.

The Honor System is a way to track honor throughout the entire server, honor is based on getting honorable kills from the opposing faction, Alliance or Horde.

Honorable kills are when you or someone in your group kills a member of the opposing faction, either in battlegrounds or world PvP.

Players will be assigned a rank, depending on their Honorable kills from the previous week. Each faction has 14 ranks, which become increasingly more difficult to acquire as you go up the list.

Each rank also comes with its own rewards, like a tabard at the lowest ranks of Horde Scout and Alliance Private. 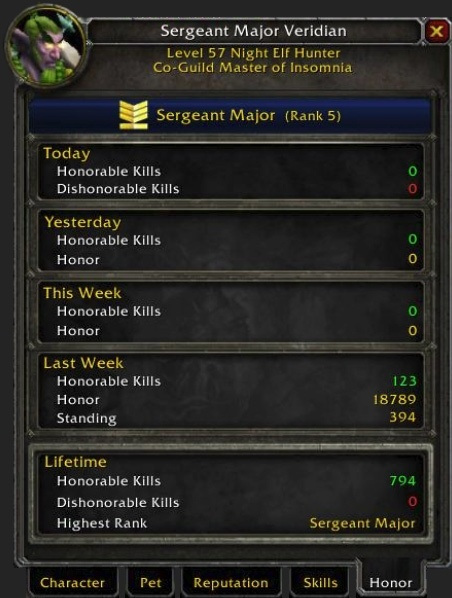 What the Honor System will look like in WoW Classic.
[ad name=”article4″]

Even though we’re getting the Honor System, Battlegrounds won’t be arriving until the next update at an unknown date.

The PvP portion of Phase 3 Three will include Alterac Valley and Warsong Gulch as the first battlegrounds released to WoW Classic.

Meaningful WoW Classic PvP is finally coming, so players who have business in Hillsbrad should get it done before November 12 rolls around.