Valorant players were left confused by Riot’s “invasive” anti-cheat systems, so a lead developer on the game’s security systems has cleared the air on exactly how Vanguard works.

Valorant’s development team have been open about their pledge to tackle cheaters head-on with their complex anti-cheat systems ever since the game was teased as ‘Project A’ as part of League of Legends’ 10-year anniversary event.

Taking down online gaming’s final boss is no easy feat, and by that logic, Riot have completely overhauled their approach with Valorant — and at the forefront of that is Vanguard.

Vanguard is a uniquely designed bit of software that is required for Valorant to run. It’s objective is to detect cheats, with its algorithm evolving as the game develops. Riot has previously noted that any game with a cheater detected will end immediately and be forgiven for all other players.

Although concerns have emerged in regards to how Vanguard operates on user’s PCs, with players specifically querying why it runs while you’re not playing the tactical shooter.

“The kernel anticheat driver (vgk.sys) starts when you turn your computer on,” one Redditor posted. “I don’t really care for it running when I don’t even have the game open. So right now, I have got to change the sys file’s name and back when I want to play, and restart my computer.”

Given the number of upvotes their post had received, a Valorant dev clarified the exact logistics of Vanguard and how it operates in their response comment.

Riot’s anti-cheat lead, Paul ‘Arkem’ Chamberlain, clarified why Vanguard is required to run during the system startup, explaining that it makes it more difficult for cheaters to tamper with the anti-cheat programme. 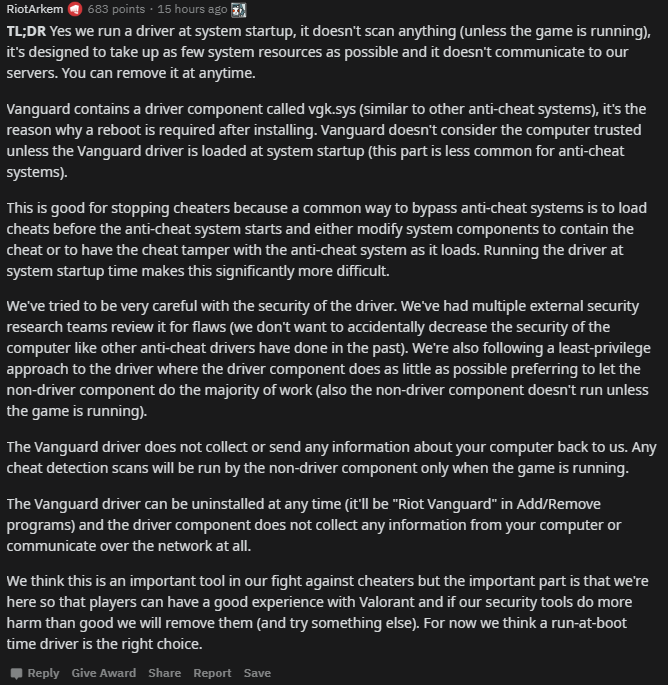 Moreover, Chamberlain added that the software “does not collect or send any information about your computer back to us” and that it utilizes the bare minimum in terms of system resources.

Another Redditor chose to clarify how Riot’s anti-cheat operates in response, where they described Vanguard as “deeply invasive” while explaining that “there really isn’t a viable alternative solution,” should players want an effective anti-cheat system.

Given that Vanguard isn’t monitoring players’ data while Valorant isn’t active and that the software utilizes as little system resources as possible, surely these are an amicable price to pay in exchange for a guaranteed level playing field?

Only time will tell if Vanguard (plus all of Riot’s additional anti-cheat measures) will be an effective counter against tactical shooters’ biggest enemy.