The highly anticipated release of Valorant, Riot Games new FPS title, has been one of the most talked about dates in the gaming calendar in 2020. The closed beta release is due for April 7 and has already brought together influencers and competitors from many different esports titles.

However, it seems that those who were invited by Riot’s esports divisions are being told to hold back on streaming the game for 24 hours, giving some influencers a headstart in reaping the rewards for the launch of the new game.

The issue first became public knowledge when legendary Call of Duty player and 100 Thieves founder Matthew “Nadeshot” Haag said that he would not be able to broadcast the game while talking with Dennis “cloakzy” Lepore on stream. He attributed the decision to complaints from other League of Legends team owners that he had access while they didn’t.

“I’m just pissed… I can’t stream Valorant on Tuesday. It’s such a long story bro. I’ll be playing but I can’t stream. I’m not allowed to stream… Other LCS, LEC and LCK team owners complained that I had access when they don’t have access so Riot asked me not to stream until the 8th, the next day.”

One source who has been involved with the Valorant launch told us the following:

“There was clearly no communication between Riot’s esports division and the people organizing the Valorant launch on this. Some of the owners got upset and said that by having Nadeshot stream it was showing preference to the 100 Thieves brand. Some even said it was a financial and competitive advantage because it meant he could scout players before they did.

“The people running the Valorant launch were thinking about Nadeshot the influencer, not Nadeshot the team owner. Now esports people are being told regardless of their invite status the fair thing to do is for everyone associated with a League team is to wait until the 8th.”

Riot Games have faced scrutiny following their call to prevent esports players from streaming for the 24 hours following tests of the Valorant closed beta.

Publicly this seems to have been confirmed by Riot Games when Kasra Jafroodi, the Esports Business Strategy lead for Valorant, posted to the subreddit the following comment.

“Hi everyone! This is Kasra from Riot (I lead Strategy on VALORANT Esports) and wanted to pop in to clarify a few things coming up around this. One of our goals with VALORANT was to ensure all esport orgs around the world received access to the game at the same time (when technically possible) so that we didn’t create a competitive advantage (both across teams and across regions).

“This meant that we gave each team access to closed beta at the exact same day (April 7th) with the same number of accounts (20). Given these teams/players were getting direct access through us, we also asked them to not stream until the 8th so that our players and fans had equal opportunity to get access on the 7th through the content creators that have already been streaming VALORANT.

“Sometimes, there’s a blurry line between esports and content creators and in this case, we asked Nadeshot to not stream until the 8th (just as we’ve asked of all other team orgs). Ultimately, our goal is to ensure fairness in access to VALORANT both for esports orgs and fans (like you).”

The decision has reputedly caused some friction between team owners. While there were those who complained about Haag’s access being an advantage, one team owner we spoke with said that they can’t believe the decision.

They said: “Surely the smart thing to do was just give all the team owners and players access [at the same time as the influencers] instead of penalizing one who did. We’re already Riot’s partners. It’s ridiculous we all don’t have access to begin with considering we have all paid significant fees to be part of their leagues. I know some Riot staff feel the same way.”

They also added discussions about the matter were ongoing but it wasn’t clear if the decision would be reversed in time for the launch on the 7th.

Countering that argument was Chris “PWYFF” Tom Riot’s Global Communications lead for Valorant. He tweeted “I didn’t want to conflate business interests with friendly outreach. Especially for orgs with influencer/entertainment arms in addition to esports: what’s to stop them from taking their allocated invites & flipping it to their content creators over interested pros? Hence the request: please hold off streaming if you were invited via our esports outreach, because the GOAL of said outreach was/is different from our online bootcamp outreach with FPS partners/content creators/folks we hope would be stewards of the community.”

… I didn't want to conflate business interests with friendly outreach. Especially for orgs with influencer/entertainment arms in addition to esports: what's to stop them from taking their allocated invites & flipping it to their content creators over interested pros? [2/4]

Compounding the matter further is a report from League of Legends journalist Travis Gafford, who tweeted that the Twitch Rivals tournament for Valorant that was part of the launch day coverage will now have to take back the invites from the competitors who acquired their invites through esports organizations and not the influencer outreach.

Additional info, Twitch is running a Twitch Rivals tomorrow and it turns out that folks who got access to the game through orgs cannot participate in it now

As things stand, it would be better for someone associated with an esports organisation to have earned access via a Twitch stream drop than to have accepted the invite to access from Riot directly, as the 24 hour delay on streaming does not apply to keys earned this way.

Haag has since tweeted about the matter, stating: “I’m grateful for the beta access that I had last weekend and the access that I’ll have for the foreseeable future starting tomorrow. Although I’m bummed that I was asked not to stream & won’t be live for the 1st day, I understand the position Riot is in and respect their wishes.”

He was also sure to call out the owners, adding: “But to all the owners that complained about my access and forced Riot into this position… I’ve been creating content since 2010. I’ve been streaming before Twitch even existed. I’ve made thousands and thousands of YouTube videos. If you’re wondering I had access, that’s why.”

Hey everyone, just wanted to clarify a few things. First off, I really am thankful to be partnered with Riot Games as a LCS team owner. It’s been a pleasure working with them over the last two years and I’m excited to be working with them moving forward into the future.

While it looks unlikely that the situation will change with such a short time span left, we will update you accordingly with any further developments.

The Valorant Champions Tour is set to define the outlook of Riot’s flagship FPS from 2021 onwards. The esport scene has been divided into three stages, giving players from grassroots to top-tier a chance to shine. Here’s how it works.

The Valorant Champions Tour is here to revolutionize professional play for Riot’s hit FPS. After a year of domestic tournaments and regional leagues, there’s now hope of getting a dose of international play in 2021.

However, the Valorant Champions Tour announcement is a lot to digest. If you’re left confused by the announcement, we’ve broken down each tier of play here, and how the entire system works, as simply as possible.

The Valorant Champions Tour is divided into three tiers: Challengers, Masters, and Champions.

It’s a similar spread compared to Riot’s handling of League of Legends. Bigger regions, like North America and Europe, will have more slots at the bigger international events.

Smaller regions, like Oceania and CIS, don’t have a direct path to qualification through their domestic events. They will instead have to make it through specified events in North America (OCE) and Europe (CIS), on top of making it through their home region.

Here’s how the Valorant Champions Tour circuit is shaping up for 2021.

What is Valorant Challengers?

Valorant Challengers is the domestic level of Valorant competition. Each region ⁠— regardless of size ⁠— will have a Challengers event.

Each Challenger event takes place over six weeks with three open qualifiers. It’s similar to the First Strike format: play through Opens, make it to Closed Qualifiers, and if you perform well enough, you make the Challengers Final. 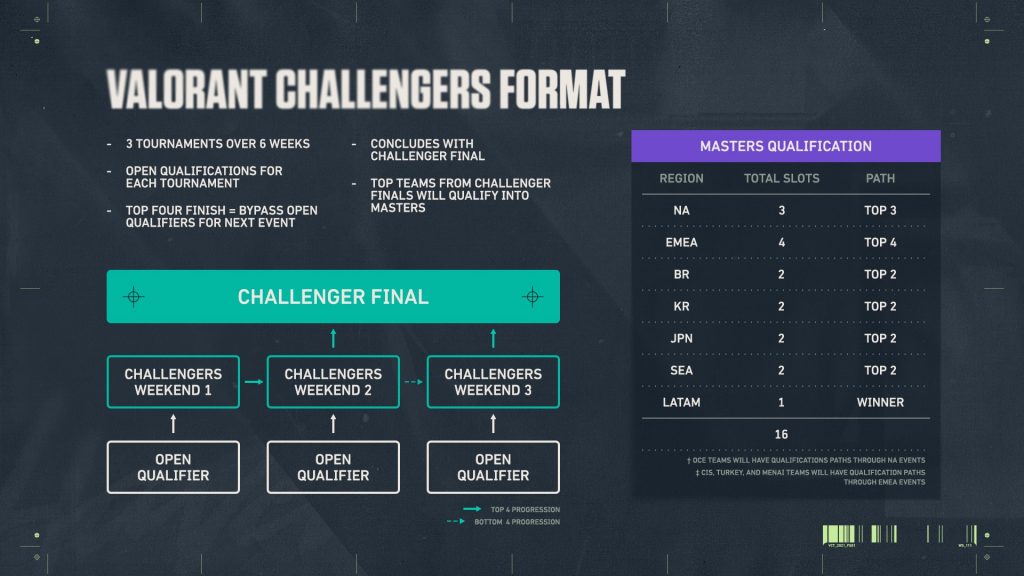 Eight teams will qualify for the Challengers Final. This is the path towards the international Masters-level events. The top teams from each region will earn themselves a spot at the next Masters event:

There will be three Valorant Challengers events throughout the year (February, May and August), each running into their respective Valorant Masters event.

What is Valorant Masters?

Valorant Masters is the first stage of international play in Valorant. The best teams from each region will qualify for one of three Masters events, spaced out across the year. The teams will be decided by their placements in Valorant Challengers.

Teams will earn points based on their performance at Masters-level events. These points will be put towards qualifying for the end-of-year Valorant Champions event ⁠— the World Championship.

Due to the current global situation, Masters events may remain at a domestic level for now, and emulate the format from Valorant Challengers. However, making it to Masters and performing well will still be the key to making the big Valorant Champions event.

What is Valorant Champions?

Valorant Champions is the biggest event on the calendar. It’s essentially the Valorant World Championship. After a year of competition, the top 16 teams around the world will duke it out for the biggest prize in the circuit. It’s set to be a “massive” two-week long event.

There will be 12 direct invites into the Valorant Champions event, based on Masters performances. However, this isn’t the end of the line. 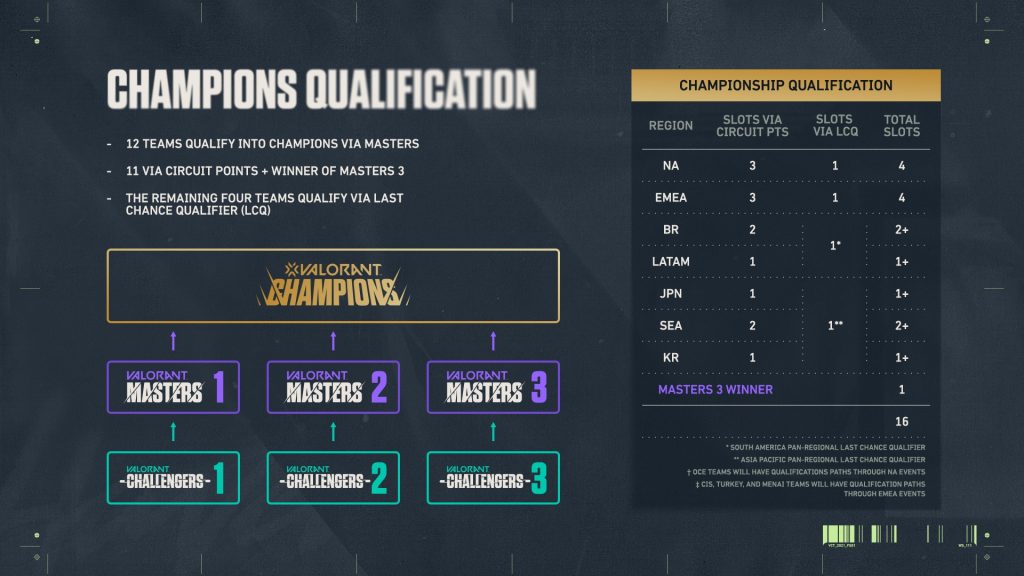 Putting it simply, the Valorant Champions Tour gives teams of all levels a chance to go from grassroots to glory. From small local Challengers events, all the way through to the Champions Final, there’s a clear path to the top no matter if you are a big organization or a small pub-stomping team. Of course, you still have to meet that Immortal 1 minimum threshold!

The Valorant Champions Tour is set to kick-off in February 2021 with the start of Valorant Challengers Season 1 across the world.