Team Heretics came out on top of the first-ever Valorant First Strike European Finals after beating SUMN FC in the Grand Final, walking away with the lion’s share of the $100,000 prize pool and shooting to the top of everyone’s rankings.

Below is how the prize money was distributed between the teams as they finished. Heretics ended up making a cool $40k, taking down Liquid, G2 and SUMN along the way as Christian ‘loWel’ Garcia Antoran claimed MVP. 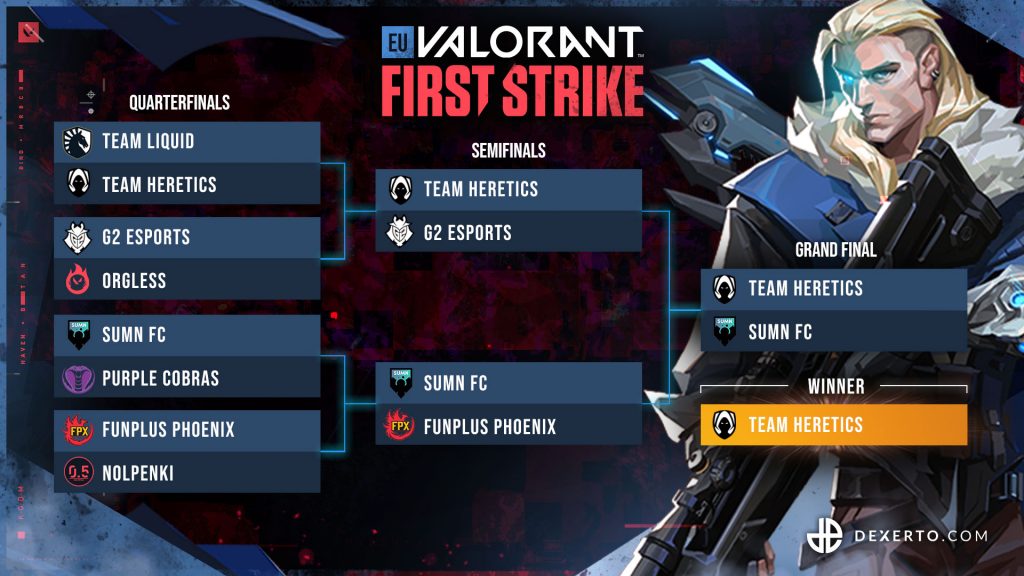 Liquid suffered a shock exit to Team Heretics in a thrilling three-map quarter-final. A dominant performance by Christian ‘loWel’ Garcia Antoran as Sage helped secure Heretics a Double OT win to close out the series.

Oscar ‘mixwell’ Cañellas led G2 to a swift 2-0 win, despite a rocky start on the opening map. A series K/D/A of 39/31/7 for the Spaniard with Raze proved too hot to handle for the Orgless lineup.

Day 2 seemed to separate the wheat from the chaff for First Strike Europe, with both SUMN and FunPlus Phoenix advancing with easy 2-0 wins. Kirill ‘ANGE1’ Karasiow led FPX in their win over nolpenki, and seemed to make a great case for himself as one of the smartest, most calculating players we’ve seen so far in First Strike.

On the other side of the bracket, SUMN FC has come out of seemingly nowhere to post one of the most impressive records yet, racking up an 89% win rate in the competition so far, which they kept going in a 2-0 over the Purple Cobras to make it to the Semis.

The third day of the EU finals might have had the best, most competitive matches so far, with Team Heretics starting things off by taking down the titans of G2, who have seemed untouchable in the tournament so far.

Not to be outdone, SUMN FC waited until what seemed like the last possible moment to start their comeback against FunPlus Phoenix, who started with a quick first map lead right out of the gate but weren’t able to keep it up in the end.

SUMN run out of gas, while Heretics take the crown

The EU Finals started out with Heretics showing they belonged with a 13-1 win on Ascent. SUMN would even things up though on Icebox. From there it would be all Heretics however, despite numerous heroic plays from doma and Boaster.

After dropping Haven 13-5, SUMN would put everything they had left into Bind, tying map 4 at 11-11, but nukkye and co. proved too strong and managed to close things out.

The big three of European Valorant all made it in, but none of them managed to get to the Grand Finals. According to our First Strike predictions, G2 Esports, Team Liquid, and FunPlus Phoenix were among the favorites to take the title. Below are the teams that took part.

Dardoch has faith in young DIG roster: “We can beat everybody, if we play our best”

Dignitas is young this year. There’s a lot of new faces, even for the most dedicated LCS fans. That hasn’t phased star jungler Joshua ‘Dardoch’ Hartnett, however: he’s still confident this team can make an impact in a highly competitive field in 2021.

Dardoch, 22, has been around the league for five years now. Alongside the semi-veteran jungler, Dignitas is fielding 28-year-old mastermind Zaqueri ‘aphromoo’ Black. So, as far as experience goes, they’re going to be the louder voices in the room.

They’ll be mentoring and shotcalling for Aaron ‘FakeGod’ Lee, Toàn ‘Neo’ Trần and 23-year-old Max ‘Soligo’ Soong who’s had a brief appearance in the LCS before. There’s talent on this team, but a lot of fresh faces with not much experience.

That means for DIG, this year, it’s all about unlocking that rising talent.

“It’s just about finding consistency in practice and putting it forth on stage,” Dardoch told Dexerto after the first week of the LCS Lock In.

“I think if we have showings similar to what we had playing FlyQuest, then I think there’s not many teams that will be able to handle that kind of play.”

Dardoch will be leading Dignitas in the LCS alongside veteran aphromoo.

Dardoch was candid about the standard expectations for Dignitas as an org of winning the split and going to Worlds, something every LCS team rep abides by every season.

What he was more focused on were the realistic expectations his team can carry going into every match. Based on what he saw early in the first Lock In weekend, there was a refreshingly optimistic view from the jungler’s perspective.

“We obviously want to win the split and make Worlds; it is what it is,” Dardoch said, “Even though that’s not, maybe, the expectation of the community or whatever. We don’t care. We only look at ourselves and we compare ourselves to who we see playing.

“There’s no way, with what we see right now, that we can reasonably say we can’t beat everybody in the league if we’re playing our best.”

The 2021 Dignitas LCS Roster with a mix of talent.

Now, there’s scary teams in the LCS. Cloud9 seems to have won the offseason picking up Luka ‘Perkz’ Perkovic and Ibrahim ‘Fudge’ Allami; Evil Geniuses seems to have cracked the Jizuke conundrum and looked fantastic in Week 1; 100 Thieves are finally forming an identity and it’s working; and Team Liquid are bankrolled to succeed.

So what’s got Dardoch so confident?

Well on an individual level, LCS fans know Dardoch is never short of confidence. But Dignitas are openly leaning on him like few others have before.

“I think [Dardoch] hit that point of maturity where he’s ready to become an exponentially better player,” Dignitas and New Meta Entertainment CEO Michael Prindiville said. “Dardoch, the way his mind thinks, the way he’s articulate and honest, that’s the reason Dardoch is going to be in a leadership position going into next year.”

It’s hard to ignore Dardoch’s troubled past, and it shouldn’t be. Prindiville even said they “took a chance” on the jungler even in light of the TSM debacle in 2020, but it sounds like the player is slipping in nicely to his newfound position.

“I just try my best to keep everybody focused on what options there are left in the game, if there are any,” the NA jungler said. “If we make some mistakes, then obviously we’re not going to have as many options in the game. But there’s still some way to come back.”

He was talking about his team and how he looks to empower them in the face of defeat. But that outlook could double as an allegory for where Dardoch’s personal career is now.

The jungler is still looking to be a part of a successful LCS team. The mistakes he’s made in his career has left him with the options he has left in the game, and he’s still looking for a way to make a comeback. And he could be worse off.

FakeGod has already shown brilliant signs of Top lane dominance with solid fundamentals against lane and draft pressure; Soligo looked stellar in his Lock In debut; and ADC Neo looked good – the exact kind of player that we’ve seen Aphromoo make into something great.

Dardoch sees more in his team. He loves how inquisitive his laners are, particularly FakeGod, who has no problem asking about more insights into the next play during a Lock in match – as the game is playing out.

He described the goal for the team environment as a “family” where it feels “like a cohesive unit.” It sounds like Dignitas is setting itself up for success.

Dardoch’s career has highs and lows, what happens next with Dignitas is up to him.

This is where some might expect this LCS project to implode with enough time and poor results. But also, maybe this is where the game turns for Dardoch. Or at least he has faith in as much.

“I think that’s the most important part of being a leader,” Dardoch said.

“It’s showing your teammates that you can back up what you say. So I try my best to be the best guy on the Rift… I hope that [mentality is] infectious to my younger guys who need to find that individual confidence to perform at a higher level.

“I think as long as we keep the mentality that we’ll be able to play whatever style is necessary for the meta and not one person is going to be the star or focal point in the team at all times, is what’s going to make a difference later in the season.”