Chandler Riggs hasn’t featured in The Walking Dead since Season 8, but that hasn’t stopped fans from pressing the actor on a potential Carl Grimes return. They might now have the answer they were looking for, too.

AMC’s zombie drama has been tearing it up in Season 10, excelling in ratings and bringing new characters to the forefront of the main plot like The Whisperers. Also, several side pieces for the series are being made, with others rumored.

We’ve got Fear The Walking Dead coming into its sixth season in October, a Rick Grimes movie coming out, Negan standalone rumors, and even a new two-season series called World Beyond premiering after TWD’s Season 10 finale.

There’s definitely enough space for more spinoffs and fans want to know if Chandler would be interested.

Carl Grimes coming back in The Walking Dead?

Rick’s son bowed out of The Walking Dead in Season 8, but is that the end for his role on screen?

Carl Grimes might have been killed off in Season 8, but loyal fans of the character aren’t giving up on him just yet. During an Instagram interview with Tommy DiDario, one Walking Dead fan asked if he’d like to see Carl get back on the screen at some point.

“Absolutely. It’s been a lot of fun,” he said. “I don’t really see it happening in any current medium of the show, but maybe, hopefully, in something else.”

Riggs now spends much of his time as a Twitch streamer, where he jumps on big trends like GTA RP. He actually built his character to look just like Rick Grimes’ son in that game. People can still watch him there.

You can catch the entire interview below. 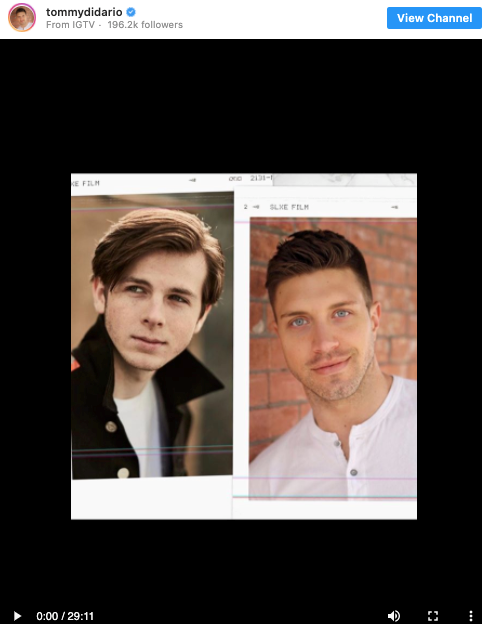 Fans of the series will have their own take on Carl Grimes. The moment he lost his right eye was big for him, and some of the later interactions with Negan would keep viewers on the edge of their seats.

Though, there is one period of the show where he thinks Carl flourished the most. He added: “I think Season 4 showed the biggest growth from Carl from start to end. It was the first time that I feel like they let Carl blossom into his own character.”

“From the end of Season 3 to the start of season 5, all of that in-between, they let Carl grow into his own character, outside of just being ‘the kid’.”

He also said that he enjoyed bouncing off his scripted father, Rick, in the show. Bringing comic scenes into a new medium was also a big deal, he revealed.

An eye patch and a big personality, Carl Grimes was one of The Walking Dead’s most developed characters.

When asked about getting such a huge role at the age of 10, he delved deeper into his love for TWD world.

About the early years, Chandler said: “Honestly, even all the way up until the end, I was the biggest fan of the show while I was on it. I read all the comics, I had everything. I thought it was the coolest thing that I was on a zombie TV show. I played a lot of video games and I would always play zombie killing games and whatnot. To be on a show, where I’m literally living out my dream, was the coolest thing ever.

“Being on the set when I was that old, none of us knew if the show would be picked up after a season. Or, if anybody would actually watch it. At the time it was all about vampires, nobody cared about zombies at the time. It was a big gamble and nobody knew if it would succeed, but it definitely did.”

Chandler might have enjoyed the times of dummy guns and props as a kid, but a spinoff where he’s one of the lead actors at this age would be a different animal. We could see a different side of him.

Whether or not it happens is unknown, but Riggs seems open to trying something to bring him back. The ball is in your court, AMC.