When is The Last of Us Part 2 coming out? Release date, trailers, PS5 details - Dexerto
Gaming

When is The Last of Us Part 2 coming out? Release date, trailers, PS5 details

Naughty Dog might have taken an age to reveal the The Last of Us Part 2’s release date, not to mention the small matter of a delay, but now we know the wait is soon over let’s take a look at everything we know about the game so far.

To say that fans of this franchise had to be patient to find out when it was coming out would be an incredible understatement, as the game’s developers remained tight-lipped about sharing information on the project since it was first revealed at E3 2018.

Much to the delight of players around the world, during the September 2019 PlayStation State of Play stream, developers presented their final trailer along with that elusive launch window people had been longing for. However, even after such a prolonged wait, the day we expected to see it on the shelves was changed.

The Last of Us 2 release date

The Last of Us 2 was initially delayed, but we now know it’s due to be released on May 29, 2020. Sony initially announced that the sequel would launch on February 21, 2020, debunking previous rumors that slated it for a 2019 launch.

During the State of Play presentation, they also gave fans what appears to be the final trailer, including the first Joel sighting since the project was announced.

The release date that can be seen at the very end of the latest promo video. With the title now set to release a few months later than expected, most members of the game’s community have have become very impatient – with good reason. The original TLOU game released back in 2013.

In a blog post for PlayStation, the game’s director Neil Druckmann explained that the game was delayed in order to make sure it reached the high standards everybody – including themselves – expect from the franchise.

“At this point we were faced with two options: compromise parts of the game or get more time. We went with the latter, and this new release date allows us to finish everything to our level of satisfaction while also reducing stress on the team.”

Other The Last of Us 2 trailers

Of course, the State of Play trailer isn’t the only one to have been revealed for the second chapter of The Last of Us. As we noted earlier, there was a gameplay trailer showcased at E3 2018, which featured a good look at what the missions in-game are going to look and feel like as well.

Aside from that, there’s also the reveal trailer for fans to take a look at as well, which can be found below. There are countless details to spot in terms of differences between the original the new, including Ellie becoming a whole lot older, but that was always going to be expected.

Now that the PlayStation 5 has been confirmed, it leaves fans wondering about what games they can expect to see released first on the next consoles. While TLOU2 would be a perfect candidate, as it’s a Sony exclusive title, the release date falls quite short of the PlayStation 5’s expected “holiday 2020” launch.

As fans of the game will know already, the original title was actually released on both PlayStation 3 (originally) and later brought out on PlayStation 5 as well (remastered). There’s a possibility that Sony and Naughty Dog have a similar plan in mind this time, but nothing has been confirmed as of yet. PlayStation 4, however, looks a certainty.

Will The Last of Us Part 2 have Factions or multiplayer?

There had been speculation about whether or not multiplayer, i.e. Factions, would be making its return in The Last of Us Part 2 and it certainly looks to be something devs are working on.

With that being said, we know for definite that Factions won’t be included in the game when it first launches, with players being advised to wait around for that part to either be released separately or as part of additional content in the future. 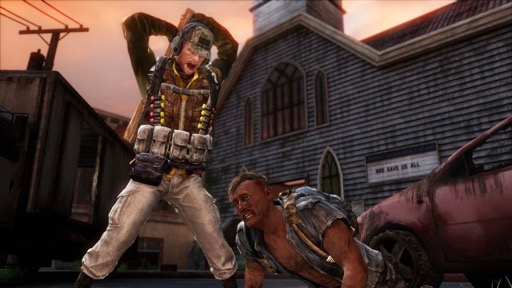 Players shouldn’t expect to see Factions in TLOU2 when it first launches.

As reported by Polygon, Anthony Newman – the game’s co-director – has said: “Multiplayer will not be included with The Last of Us Part 2. I know we had kind of announced that [it would have multiplayer], but as the game has developed, it’s become so ambitious, so grand in scope, and so intricate in its complexity, that it really required the full focus of the studio to deliver this single-player experience.”

Having that in mind, there’s a chance that any remastered version of TLOU2 may have multiplayer included in it, which would buy the team more time to develop it while the standalone story game does its thing on PS4.

Which characters will be included?

Based on what we know so far, and it took a while to get to this point, Joel and Ellie will once again be part of the main story.

The two characters were pivotal to the success of the original game and appear to be returning with new looks and potentially developed characters as well – given the fact Ellie has now grown up somewhat since we last saw her in-game.

Joel and more characters are coming back for The Last of Us Part 2.

Aside from that, we see a number of characters in the trailers that may be either miscellaneous ones that fill out segments of the game or ones that prove to be a cornerstone of the adventure. We’ll soon find out. What we do know, however, is that the likes of Clickers, Seraphites and more will be a real challenge to fend off in the next game.

Other reports suggest that Naughty Dog has actually been using motion capture equipment on a number of real dogs, which would presumably be brought to life in the game.

Whether or not there will be a playable mission with a canine remains to be seen, but it’s unlikely. Chances are, we’ll just see them wondering around the post-apocalyptic world in the wild.

The Last of Us Part 2 Ellie Edition

The special Ellie Edition of The Last of Us Part 2 will contain a whole bunch of cool stuff.

There’s also a limited edition version of The Last of Us Part 2, called the ‘Ellie Edition’ and fans have been clamouring over it ever since it was announced. For those who haven’t already seen it, though, let’s take a look at what’s included and how much it will set you back.

The fan-favorite version sold out very quickly when quickly when released back in September 2019, with many asking Naughty Dog for a few more chances to purchase it. The last sale, at the time of writing, was held on February 13 and saw players grab the product from the likes of Amazon, Best Buy, GameStop, Walmart.com, Target, and EB Games at a whopping price of $229.99.

The edition comes with a replica of Ellie’s backpack, an Ellie figurine, as well as a few other collectible goods. As soon as it goes back on sale, we’ll be the first to let you know.

So, there you have it! Knowing what we now know about the game, 2020 is going to be a landmark year for Sony and Naughty Dog – without doubt!