Shortly after teasing a collaboration on skins with Rogue Company, 100 Thieves revealed their branded in-game outfit and weapon skins for the emerging third-person shooter.

Rogue Company debuted as a third-person, multiplayer shooter from Hi-Rez Studios in a July 20 closed beta and is expected to unveil with a full release later in 2020. The game, which will feature cross-play and cross-progression across PC, Nintendo Switch, PlayStation 4, and Xbox One, has ramped up in its collaborations with content creators.

Following teasers of a map designed in conjunction with star streamer Dr Disrespect, 100 Thieves are also partnering with Hi-Rez to deploy branded skins for four of the game’s characters, which will come out on Sept. 30.

As Nadeshot suggested, his team has been “cooking up something incredible” with the multiplayer title’s developers, which understandably drove massive interest and curiosity from both the org’s and game’s fan bases.

In a classic, staggered continuation of that hype, 100T served up one skin collaboration per day, starting with Dima, one of Rogue Company’s more popular characters.

Straight off the creative grill, innumerable fire emoji replies confirm that fans consider this cosmetic absolute heat. Dima is rocking the organization’s classic black, white, and red color scheme in a tough streetwear look that matches the aesthetic Nadeshot’s group has been pushing since the brand’s inception in November 2017. 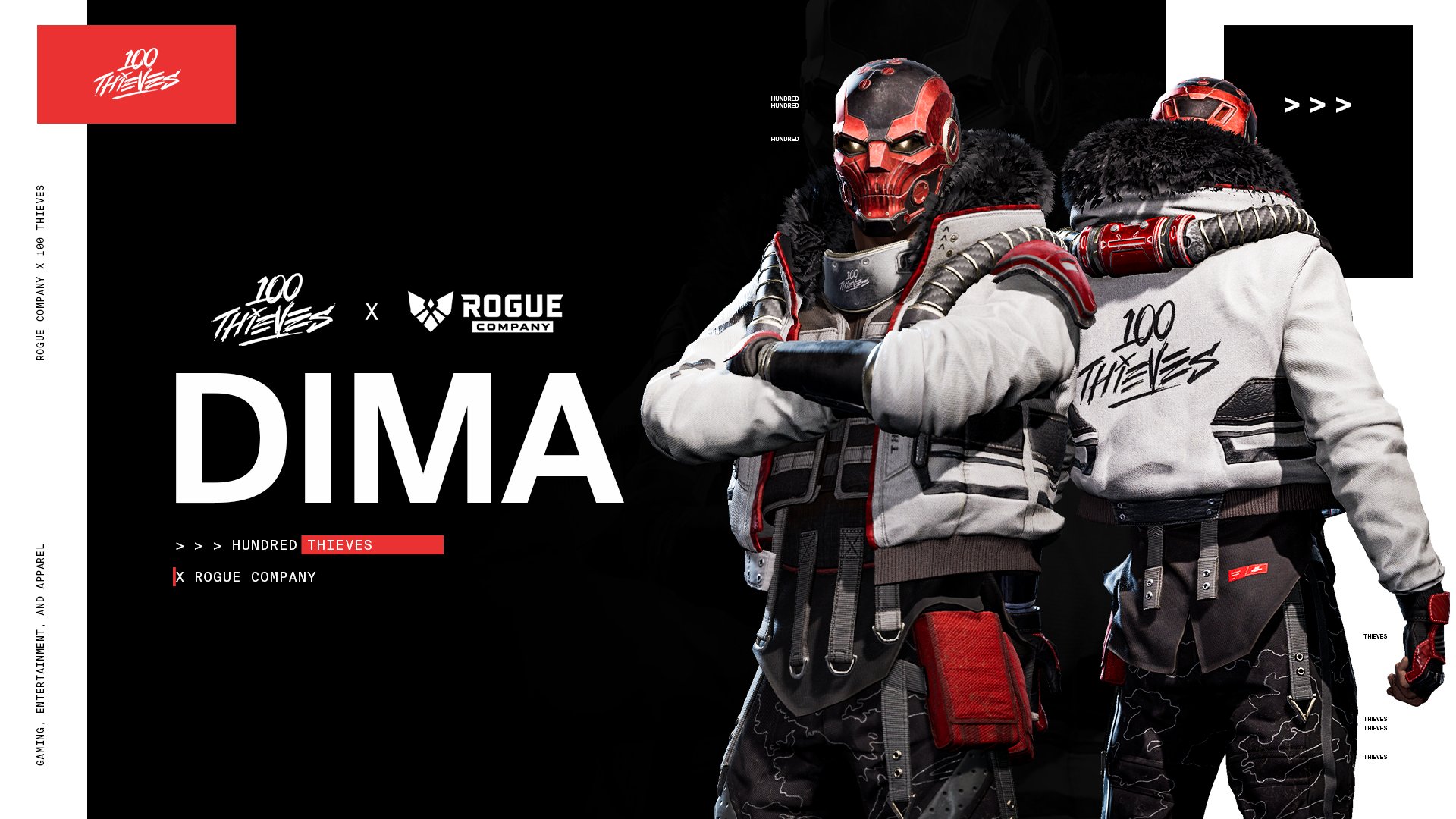 The second skin revealed is for one of Rogue Company’s more popular female characters, Phantom. It features a slick jumpsuit, with the red, black, and white colorway as well as some subtle design markings and a nice 100T logo slapped on the back.

Third up was Rogue Company’s in-house physician Saint. His trademark green dreadlocks have now been dyed blood red to fit with the 100 Thieves colors, and his red and white jumpsuit definitely matches. A 100T logo placed on his back does a nice job of tying it all together, but there’s no sign of his drone or any changes to it. Hopefully, they didn’t neglect the most important part of Saint’s kit. 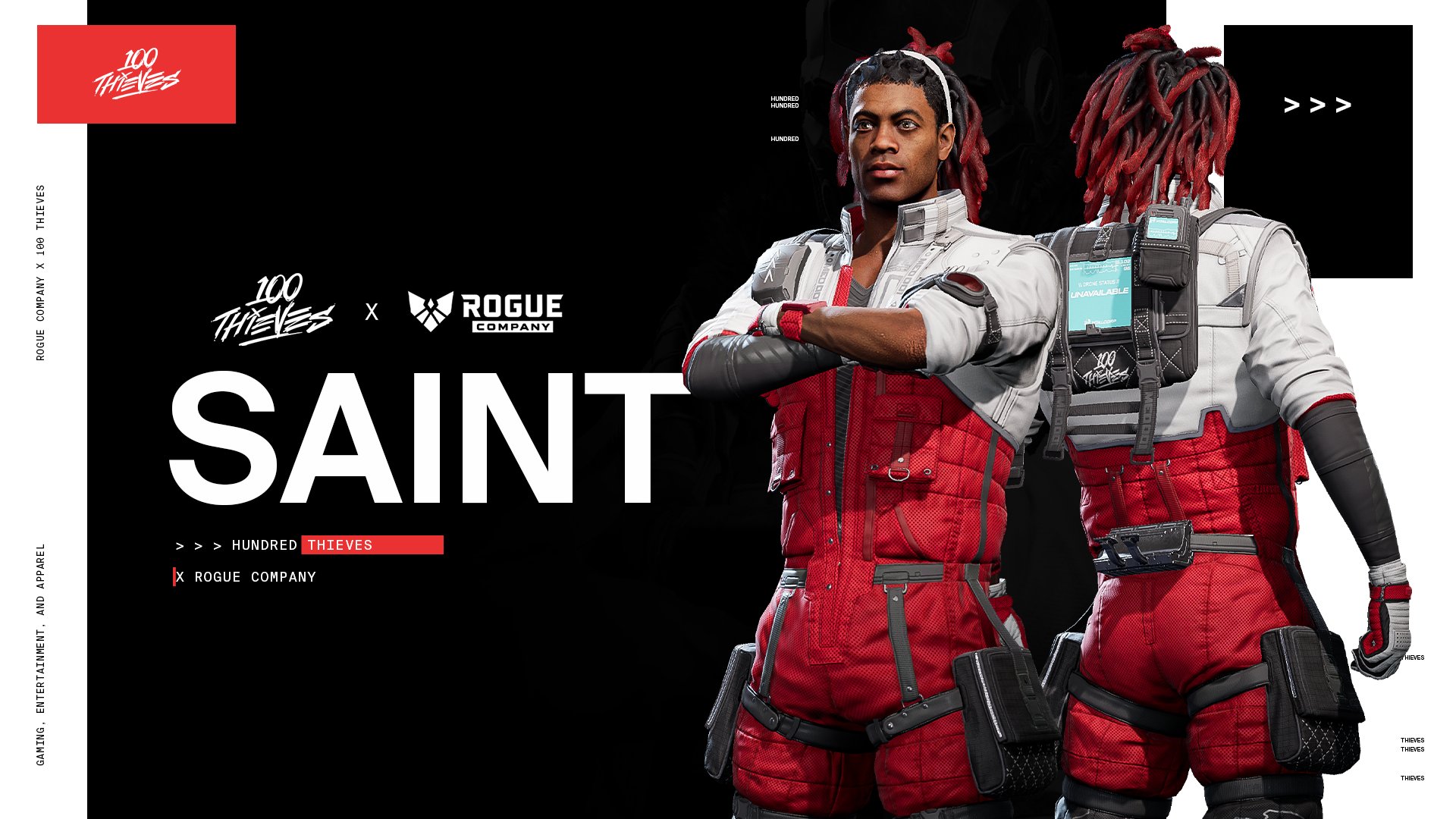 Finally, the game’s cover girl herself Ronin was the fourth one to get the custom esports skin treatment. The Rogue continues to be the most stylish of them all with a branded 100 Thieves jacket that looks like it could have come from the org’s gear store itself. The Duelist is already one of the most popular characters among players, so expect to see quite a bit of this cosmetic when the new line finally comes out.

Ronin is the poster girl for Rogue Company, so of course, she wasn’t going to be left out.

If you thought that Rogue skins were all that were coming with the 100 Thieves collaboration, well, you thought wrong because the game will be coming out with a weapon wrap for every gun and melee in the game branded with the org’s logo and colors.

All the weapon skins coming with the Rogue Company X 100 Thieves collab.

The melee weapons especially stand out and are instantly some of the coolest cosmetics in the game. Just imagine tossing that stylish 100 Thieves katana into the back of an unsuspecting enemy during a round, or finishing off an opponent with what might be the first-ever esports branded baseball bat.

There’s also an exclusive spray included in the 100 Thieves pack.

Like we mentioned earlier, the 100 Thieves outfits and weapon skins are coming out on Sept. 30, but certain details like price, availability, and more are still unknown.

While this isn’t Rogue Company’s first collaboration with a content creator or influencer, it is the first time an esports organization has had their logos emblazoned upon in-game characters with exclusive cosmetic items.

One has to wonder if that means 100 Thieves is considering getting more involved in the new competitive shooter, even possibly as an esports team following the game’s full release.