PUBG Update 4.3 is live for PC now and brings the new Survival Mastery feature, the powerful DBS shotgun, and a host of other notable changes.

Since March 2019, the PUBG development team has had different leadership which seems to have made updates more substantial. This was evidenced by Update 4.1 which came back in July.

That update was particularly significant as it introduced the Erangel visual update and changed the loot distribution of the iconic first map – two updates which the community felt were overdue. A storyline was also added to the battle royale game, although there are still a lot more questions than answers about this as it feels like there’s more to be revealed. 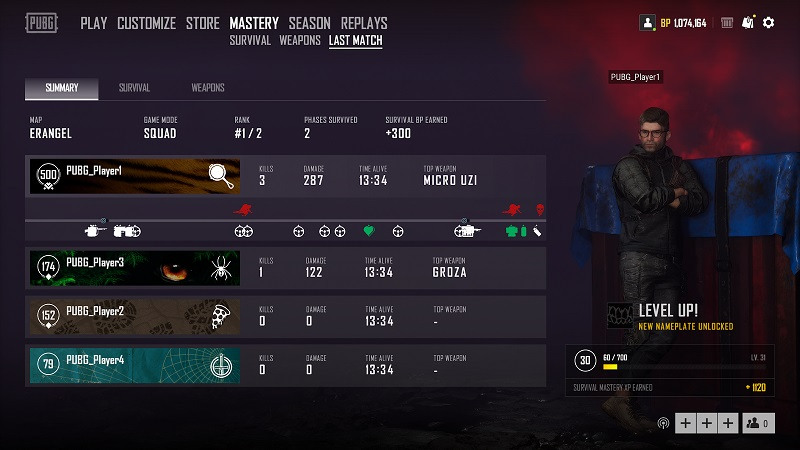 Update 4.3 continues in this vain whereby each update brings more than just a couple of features but something actually noteworthy.

Firstly, the DBS shotgun is a major weapon addition in terms of the how games will play out. It is a double barrel pump-action bullpup shotgun capable of producing immense damage in a short space of time.

The new weapon comes alongside some important tweaks to how shotguns will work in general. This could potentially alter the meta of the game, making the sparsely used shotguns (at least in the late-game) a now viable option.

Elsewhere, Survival Mastery is, as a lot of you guessed, similar to Weapon Mastery. Like the previous mastery system, this one won’t be affected by seasons either.

Perhaps more excitingly for some players, it will not only give another progression system in PUBG, but provide clear stats for you and your squad members. So, whether you are interested in your in-game tendencies or just want to compete against your team, you now have a direct comparison.

Kills, damage, time alive and your ‘top’ weapon can all be seen at the conclusion of every game. A long-term view of this data can also be accessed within the menus.

In addition to the DBS shotgun and Survival Mastery, weapon effectiveness has also been overhauled alongside changes to the sound. This, and more, can be found in the full patch notes below.

We are excited to introduce the Survival Mastery system, where players can develop their less-than-lethal aspects of PUBG gameplay. This companion system to Weapon Mastery, which allows players to progress their skill in gunplay, will also introduce new ways for players to express their personalities on the Battlegrounds with new rewards and PUBG ID.

Players can express themselves through their PUBG ID

The days of slow, weak zombies are over! Custom match Zombie modes are getting the following improvements:

Dev Note: We’re making this change in response to player feedback and frustration to being placed in a Squad with players who speak a different language, making it difficult to communicate properly. For many players, this change will not be noticeable, but in regions such as Europe, with multiple countries in close proximity speaking many different languages, we expect ease of communication to be noticeably improved. As the goal of this change is to improve your gameplay experience, please share your feedback and let us know your thoughts. We will actively monitor player feedback and make additional changes if required.

The following items are now available in the store: