Player Unknown’s Battlegrounds will be down for a scheduled 7.5 period while maintenance is carried out for PUBG Update 28.

Xbox One and PS4 won’t be affected. Updates for the console ports usually operate on a three to four week lag.

PUBG fans have been clamoring for a long-term progression goal ever since Player Unknown’s Battlegrounds was released. The new system will provide an incentive to use multiple guns as levelling them up will earn unique rewards not seen in any other area of the game. 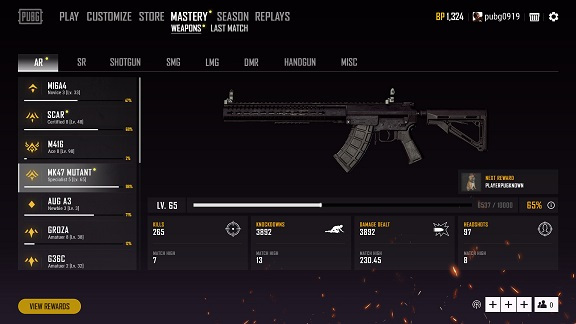 While the previous update had various loot balance changes to Erangel, it did state that this was ongoing project in order to balance Erangel properly. As a result further changes have been made in PUBG update #28.

Elsewhere, there is also some changes being made to the blue zone in Erangel, although this is only on the test server. It isn’t yet known whether these changes will come to the live servers.

While sniper rifle spawns have increased, the effectiveness of them has been reduced. Specifically shots to the torso have been reduced and the AWM base damage has also been decreased.

Much like Apex Legends and Fortnite, the boost bar will now be visible for teammates on the team UI.

The full patch notes for PUBG Update 28 are as follows:

Weapon Mastery has been added, a new feature that allows players to check their gun stats and earn rewards based on their skills!

A second round of Erangel loot rebalances has been made, as well as improvements to some sounds and effects related to gameplay.

As we have spoken previously in our Dev Letter: Erangel Loot Rebalance, we are constantly analyzing player feedback, play patterns and other data. With this update, we’re implementing a second round of changes to improve the player looting experience on Erangel.

After the launch of the Survivor Pass 3: Wild Card, we’ve been continuously collecting and analyzing mission result data. Additionally, we’ve been actively reviewing players feedback regarding specific mission difficulty. We have chosen to adjust and remove some missions which players found too difficult to complete.