April Fools’ jokes are appearing everywhere and Niantic couldn’t resist the opportunity to include their own in Pokemon Go.

There are plenty of Apil Fools’ jokes that could be included in Pokemon Go. Frequently seen Pokemon disguised as the likes of Mewtwo, Mew or Giratina and fake shiny Pokemon are just a couple of ideas.

Thankfully, Niantic have avoided these though, as a lot of Pokemon Go trainers may not have found the funny side of such disappointment. For every trainer that had a shiny taken away from them, another would have been composing a not so friendly message for the Pokemon Go developers.

Instead, Niantic have opted for a light hearted and less frustrating way to get involved in April Fools’ day.

The main protagonist of the Pokemon anime series is reportedly in Pokemon Go. Ash Ketchum, a play on the Pokemon slogan “gotta catch ’em all”, is apparently channelling his inner Smeargle and photo-bombing trainers’ photos.

Serebii have reported Ash is appearing in random photos, but it has yet to be confirmed elsewhere or by anyone in the Pokemon Go community. 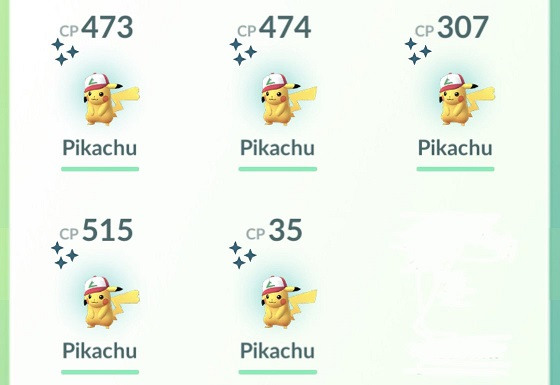 What has been confirmed though, is ‘Ash hat Pikachu’ has returned. While using the Pokemon Go Snapshot feature, Pikachu, wearing Ash’s hat, will occasionally photobomb.

This results in the rare hat variant of Pikachu spawning, giving you a chance to capture it. It has also been confirmed that a shiny form is available.

Of course, this feature was first adopted by the elusive Smeargle. A key difference is that Pikachu will photobomb more regularly, but can only be caught a reported maximum of five times.

It isn’t clear at this stage whether this special Pikachu will be available after April Fools’ day.