On May 10, the Pokemon Company revealed they were working with Nintendo’s mobile partner, DeNA, to bring an entirely new Pokemon game to mobile. The Pokemon press conference confirmed that game to be Pokemon Masters.

The idea for this game came from a Game Freak employee. His idea was to make a game that included all of the past and present trainers from the mainline Pokemon video games.

While development is still ongoing, a short video showcasing some Pokemon Masters gameplay has been shared. The few clips provided show a more anime styles of graphics, which is different to Pokemon Go’s 3D style. Furthermore, the iconic Brock and Misty from the Kanto region also appear. Mobile users can skip to 1:02 of the below video for gameplay footage.

The title of Pokemon Masters was officially unknown until it was revealed at the press conference. However, a Japanese message board correctly leaked the title on May 18.

Other information that the leak revealed was also proven correct in the gameplay trailer. This suggests information which hasn’t been confirmed to be true yet, will likely be correct.

Here is the full list of translated details that were leaked: 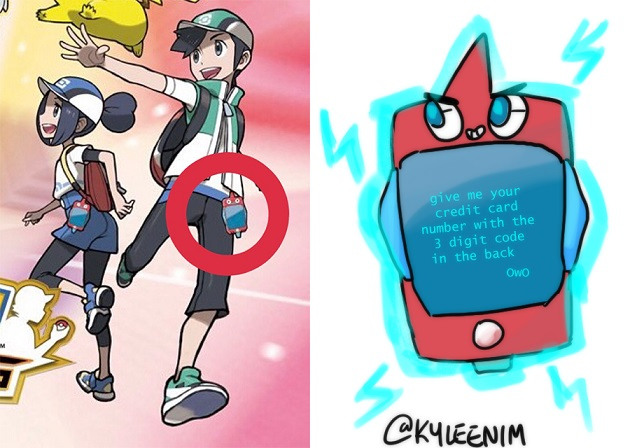 One eagle-eyed Pokemon trainer noticed Rotom as a cellphone…

This particular Pokemon game seems to be marketed towards new Pokemon trainers as is evidenced by the auto battling option and that there is only one weakness per Pokemon. This simplifies the game, meaning trainers don’t have to worry about Pokemon type complexities nor grinding battles if they choose not to do so.

While Pokemon Masters is free to play, it does adopt the gacha model. Gacha games are common in Japan and do receive criticism from some quarters due to the need to spend real money in order to complete the game in a timely fashion.

Pokemon Masters will release on iOS and Android platforms some time during 2019.