Mega Evolution has arrived in Pokemon Go and we now, finally, know the long awaited details.

Trainers have been expecting some form of announcement for a while now, and Niantic have finally delivered. They initially took to Twitter via the official Pokemon Go account to say: “Trainers, we have huge news coming your way… Or should we say MEGA news?” We see what you did there admin, well played.

Trainers, we have huge news coming your way…

Or should we say MEGA news?
Stay tuned! #PokemonGO pic.twitter.com/aae4FejJ1A

What is Mega Evolution?

A quick recap for those of you who don’t know, Mega Evolution was first introduced in Pokemon X and Y. It is an additional evolution that is only temporary.

Only certain Pokemon can use the Mega Evolution mechanic, though. There are a lot but some of the more notable ones include Venusaur, Charizard, Blastoise, Mewtwo and Tyranitar.

It is triggered when a capable Pokemon is holding the Mega Stone for their particular species. It can only be used in battle, and for one Pokemon in your team. After the battle mega evolved ‘mon returns to their normal form. Note: this is what happens in the main series.

There are specific Raid Battles which give you Mega Energy. These can be used on the four Pokemon capable of Mega Evolution: Venusaur, Charizard, Blastoise and Beedrill.

Pidgeot was also found in the code but has yet to be activated. There will be surely plenty more to come, too.
. 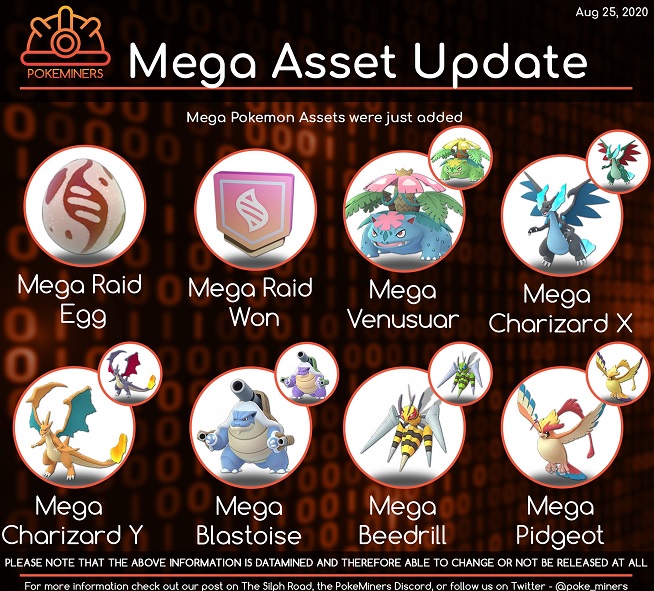 Pokemon that are capable of doing so, will mega evolve with something called Mega Energy. This is obtained in Mega Raids which was alluded to above.

Interestingly, unlike the main series, it looks like the Mega Evolution will be of a less temporary nature whereby it will return to its normal form when its Mega Energy depletes.

While trainers can only have one at any time, they will remain in that state until you mega evolve another. The first time you put it in its Mega Form will cost 205 (or 105 for Beedrill) and then 105 and 55 thereafter.

They can only battle when attacking gyms, Raid Battles and in Trainer Battles. That means they cannot defend Gyms or compete in GO Battle League – although this is expected to be changed soon.

Reportedly, Mega Evolutions only last four hours once activated. So, you’d be wise to make the most of them during that period!