Pokemon GO reached a major financial milestone in 2020. The wildly popular mobile app not only made billions in revenue, but made more than Gen 7 & Sword & Shield combined.

Pokemon GO took the world by storm in 2016, and became an absolute cultural phenomena. The app got millions of players around the world to venture outside their homes to catch their favorite ‘mons in the real world.

Despite releasing four years ago, the Nintendo game has actually continued to skyrocket in popularity. According to new reports, the mobile title is now even more lucrative than the series’ mainline RPG releases.

GO had its best year financially in 2020.

Pokemon GO players are hungry for in-game content, if new reports are anything to go by. According to popular analyst Daniel Ahmad, the mobile app has now grossed a lifetime revenue of over $4 billion dollars.

“Pokémon Go has surpassed $4bn in lifetime revenue according to SensorTower. $1bn of which has been generated in 2020 so far, which makes 2020 the best year for the game on record since 2016,” his November 3 tweet read.

The industry veteran also pointed out that Niantic added “stay at home’ features to adapt to global lockdowns. Considering the state of the world, the numbers are incredibly impressive for a game that usually requires you to go outside.

Pokémon Go has surpassed $4bn in lifetime revenue according to @SensorTower.

The game added stay at home features during the lockdown.https://t.co/L2DXKly7VK pic.twitter.com/c7zuSGPnHu

Even more interesting is that according to the reports, GO made more revenue than Gen 7 and 8’s games combined. “Just to put this into perspective. Even if you combine Sword/Shield, Let’s Go, Sun/Moon & Ultra Sun/Moon, that’s still less than $3bn,” he tweeted.

Serebii’s Joe Merrick reacted to the numbers and gave his take on why the mobile app made so much in 2020. “The monetisation has been pushed hard this year. Ticket events at least once a month. Remote Raid Passes and Incense needed to play well during these times and before then there were lots of egg events,” he said.

Former Head of Strategy at Amazon Studios, Matthew Ball, also weighed in on the reports, and applauded the app’s performance given the lockdowns: “No matter how hot it premiered, or how theoretically problematic a lockdown should have been..Pokémon Go has already had its biggest-ever year with two months to go.” 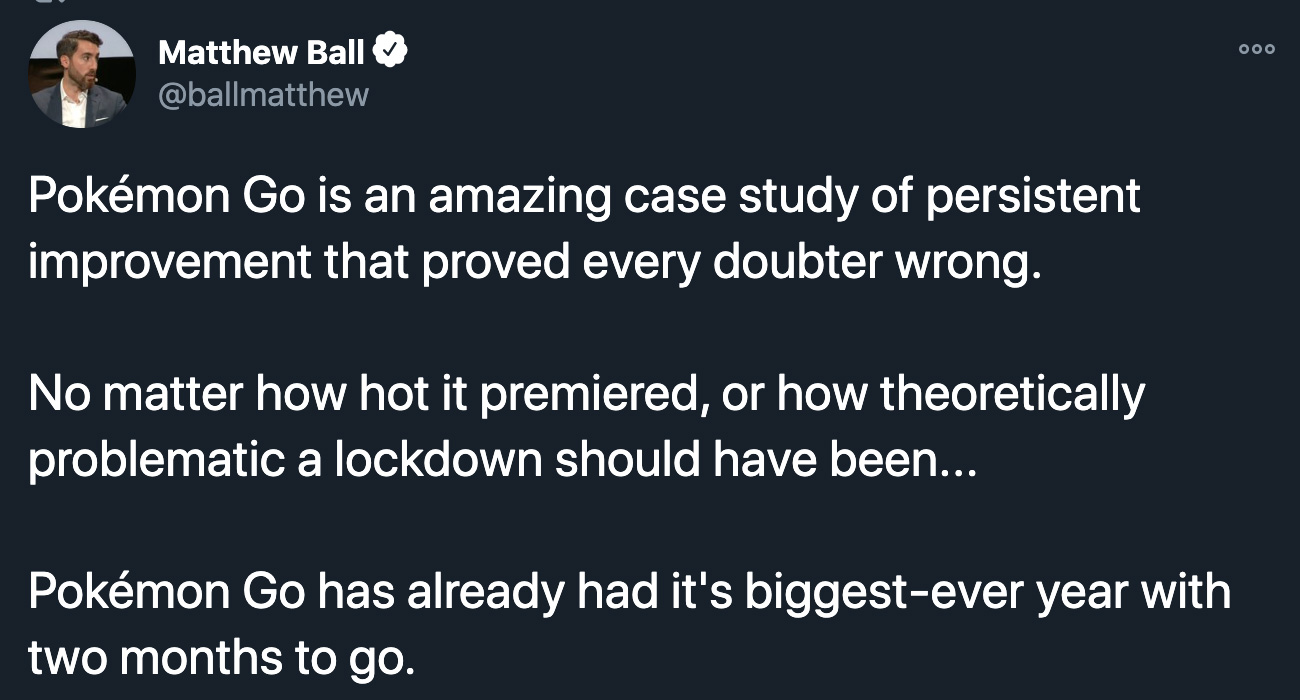 Gen 7 began with Sun & Moon in 2016, and ran through 2020’s Crown Tundra release which made its debut in October. However, despite the RPG’s popularity, it appears that GO players are willing to spend more money.

It should also be pointed out that while Sword & Shield had a $30 expansion pass, the Nintendo Switch title does not offer microtransactions or a way to earn continued revenue. Still, $4 billion in four years is impressive, to say the least.