A Pokemon player went viral after sharing how they tragically lost over 14 years worth of monsters. A break-in not only erased a childhood worth of memories, but a special Shiny ‘mon too.

The Pokemon community opened up about their saddest stories involving the beloved Nintendo RPG. From Shiny fails to mistaken trades, Trainers shared the most tragic experiences they’ve had.

One player left fans heartbroken after explaining how a thief stole over a decade worth of their games. The criminal took away hours of precious playtime, and special ‘mon – including a Shiny – that they can’t ever get back.

Pokemon fans shared their saddest stories with the RPG.

A viral post on Reddit had players from around the world opening up about their most tragic stories. “I was just wondering, what was your saddest moment you’ve had in Pokemon?” a user asked. One Trainer shot to the top of the discussion after explaining how they lost hundreds of ‘mon due to a thief.

“My now-husband’s car was broken into back 2014. I had left a game case in there which was stolen and had EVERYTHING in it. My whole childhood – red, silver, crystal, sapphire, leaf green, pearl, mystery dungeon red, black, soul silver and black 2. Every pokemon on every team I had ever trained was gone,” ‘weepinbells69’ wrote.

As if the story wasn’t sad already, the fan explained they lost a Shiny Weepinbell that meant a lot to them. “EVEN MY SHINY WEEPINBELL which I still think about to this day (caught by my brother and traded to me because he knew it was my favorite). I still love pokemon and continued to get all the games as they were released but it hasn’t been the same since then,” they continued. 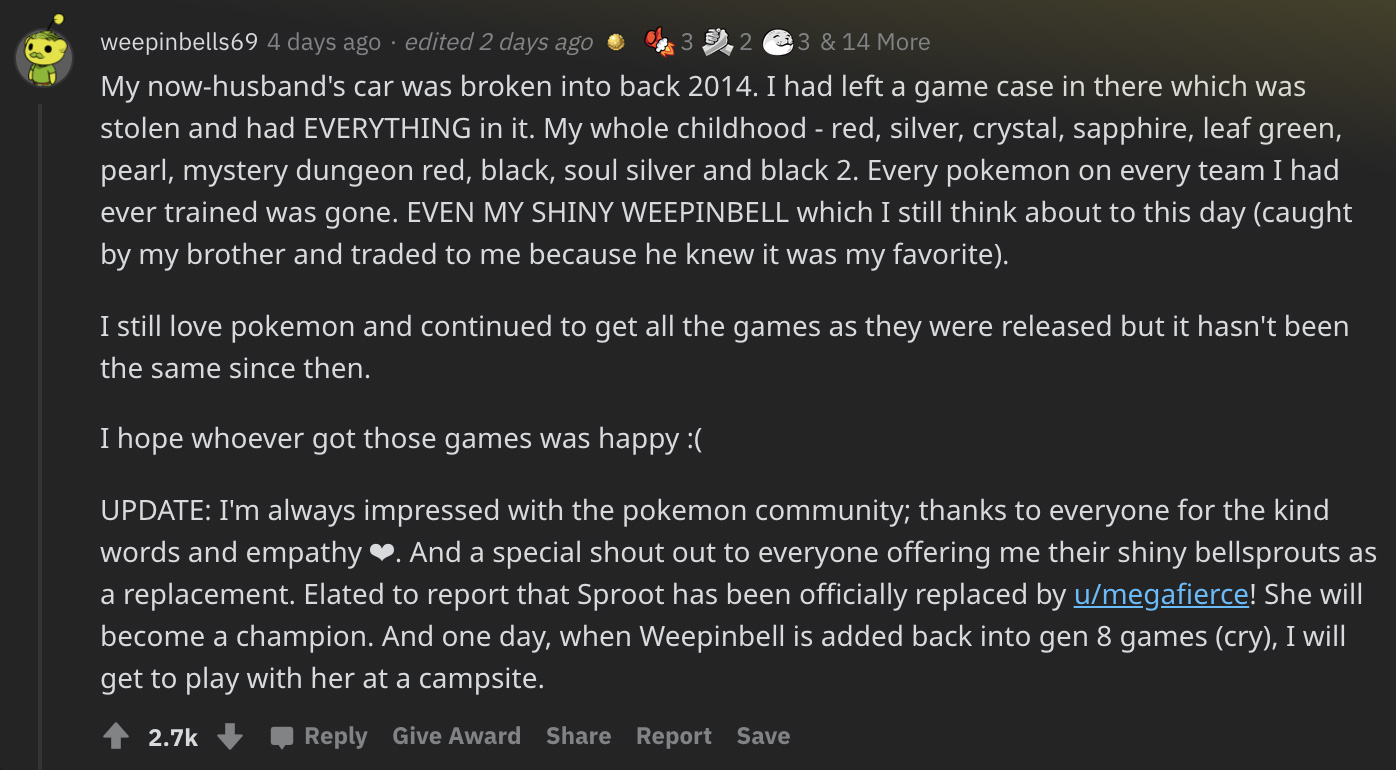 The story not only got an outpouring of sympathy from fellow Trainers, it also inspired other players to share similar stories. One user lost their Gen IV Diamond save file to a hurricane.

“In 2012 Hurricane Sandy was heading for my town and we had to evacuated and I couldn’t find my DS anywhere. Almost everything I owned was destroyed, including that DS,” they said. 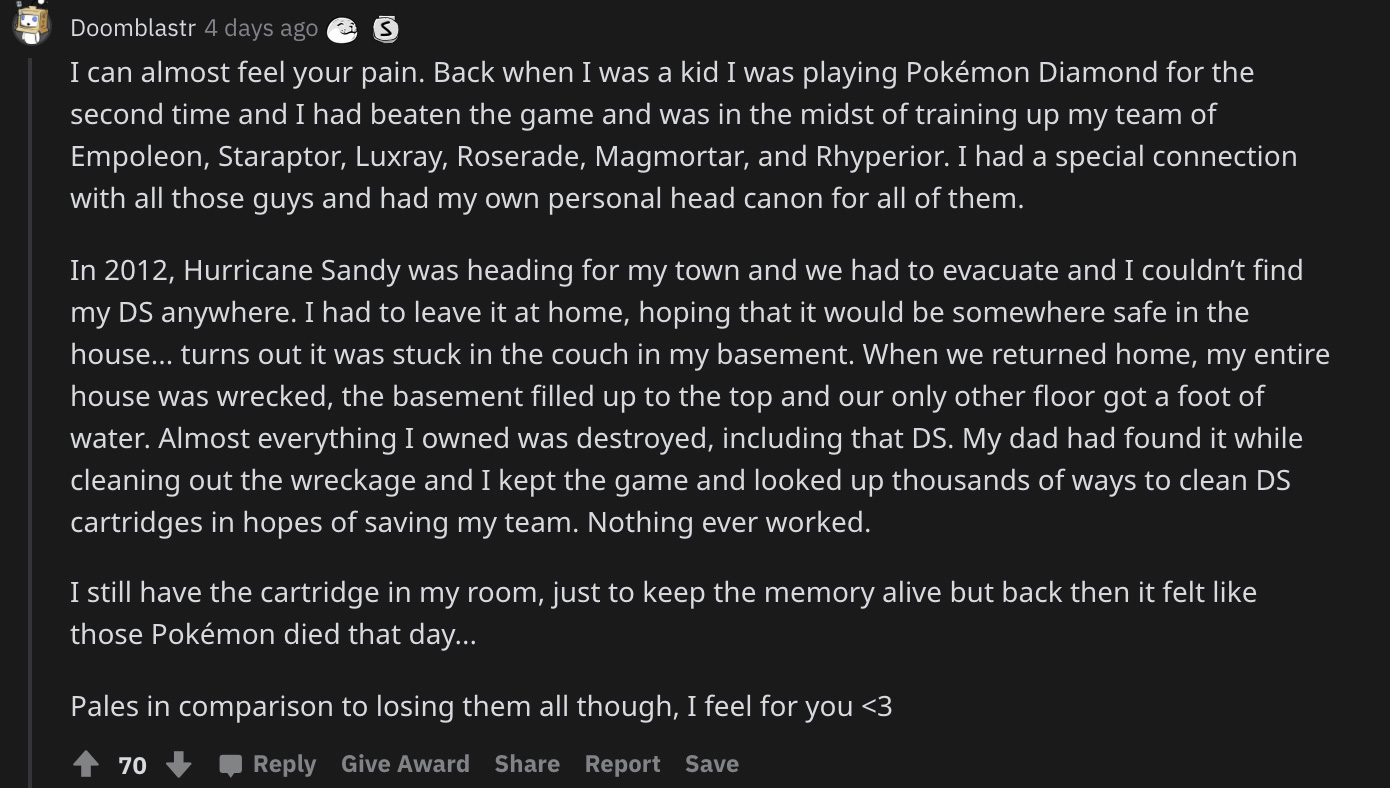 If nothing else, the sad stories are an example of just how much the series means to many players. While just digital characters, many have become attached to the ‘mon they spent their childhood training. Although not a perfect solution, The Pokemon Company released the Home app in 2019.

The paid service allows allows fans to transfer past generation monsters into one place where they can be stored on cloud servers. If these tragic tales are anything to go off of, it’s probably a good idea to back up your favorite characters as life can be wildly unpredictable.

Twitch star Nick ‘NICKMERCS’ Kolcheff has got an interesting FFAR loadout for Call of Duty Warzone following the recent nerfs to the DMR and other weapons.

The meta in Warzone is constantly evolving as Call of Duty fans try and get a leg up on their opposition in any way shape or form.

Since the launch of Black Ops Cold War, it’s been all about the DMR, Diamatti’s, and MAC-10, but recent nerfs have got players searching for different choices. Some have gone back to the Modern Warfare weapons – the M4, AMAX, and Kilo-141, for example – while others have tried to find answers in Cold War.

The FFAR, which resembles the FAMAS from years past, has been the answer for some. It’s even got NICKMERCS trying it out and dropping a pretty nice loadout.

The FFAR has become of the best guns in Warzone.

The FaZe Clan member unveiled the loadout he’s been using in his January 16 video, noting that, even though its an assault rifle, it might make some of the SMGs obsolete.

“However, I do think this FFAR could replace a lot of the SMGs,” Nick said. “I think the overall kit is a pretty good kit, and if you want to have some fun, this is a great class to do that.”

The accuracy does take a slight knock in Nick’s setup, however, the FFAR does get a nice little boost to both the range and mobility. It’s not exactly going to be a sniper or a KAR, but for what it is, it’s certainly nice and up there with some of the best weapons around right now.

The YouTuber does note, though, that it’s probably not going to be a class you see streamers running in tournaments. But, for a bit of fun and racking up kills, it’s certainly a nice change of pace.

Plus, when the time comes and Raven rolls out a few more nerfs, everyone will be searching for the next best thing, and the FFAR should be up there. So, you may as well get used to it, if you’re not already.