There was plenty of opportunity for great jebaits this April Fools’ Day and the Overwatch Community didn’t let any opportunity to try and pull one over on fans pass by.

Plenty of esports organizations and companies are getting into the spirit for April Fools day 2019, and there’s no way the Overwatch community was going to miss out on the fun.

There were plenty of jokes to choose from for this list, with Overwatch League teams signing pets, plenty of fake patch notes flying around and even the Atlana Reign teasing about dafran, so here are 10 of the best Overwatch baits from April Fools’ day 2019.

10. Jake heads to the Dallas Fuel 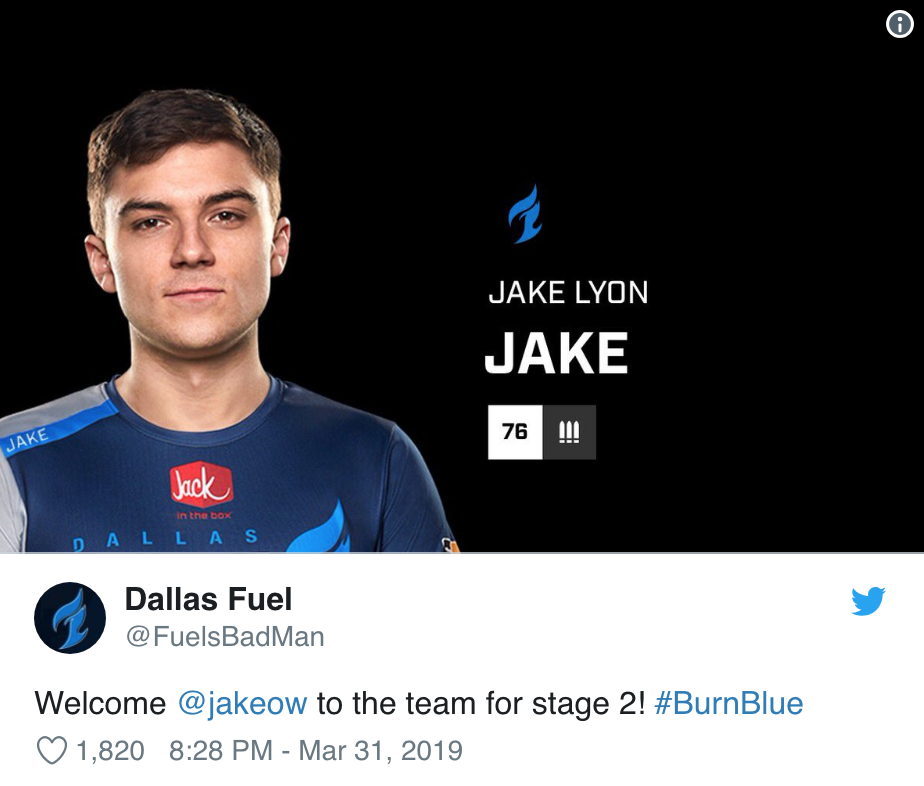 Jake ‘Jake’ Lyon is one of the most popular players on the Houston Outlaws, so one fan decided to see how people would react if he were traded to the Outlaws rivals, the Dallas Fuel.

As expected, a lot of fans ate up the bait before they eventually realized the tweet wasn’t legit, or even from the official Dallas Fuel Twitter.

A quick look at Jake’s Twitter shows he’s still is on the Outlaws, but the tweet was good enough to fool at least a few Houston fans. 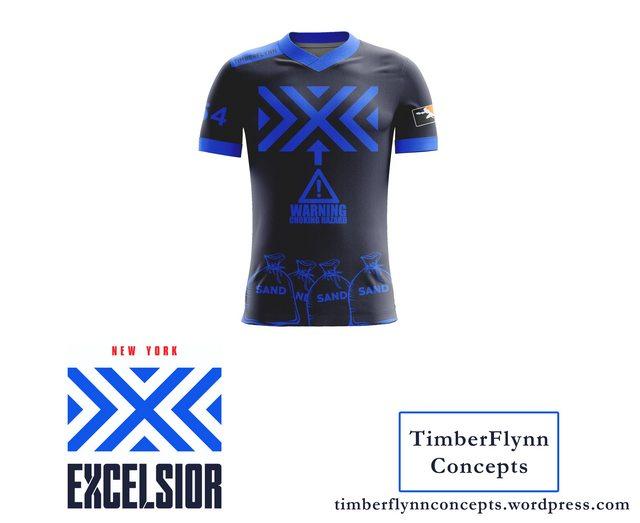 Sandbagging and choking warnings, everything checks out.
https://www.reddit.com/r/Competitiveoverwatch/comments/b82fid/on_this_monte_christmas_i_made_jersey_designs_for/

One Overwatch League fan named timberflynn gave fans an inside look at possible designs teams were considering for future rebrands.

The new jerseys seem to reflect memes about each team, in a bold new strategy for the League’s second year.

Obviously, the jerseys are only in the blueprint stage right now, but they would definitely be a hit with fans, especially the New York choking warning kit.

The news that Daniel “dafran” Francesca would be retiring from Overwatch League following Stage One hit a lot of fans hard, but the now full-time streamer announcing he would be playing Overwatch rival Paladins instead rubbed salt into the wound.

“Will now be moving to become the first Paladins partnered streamer,” dafran wrote on Twitter just after midnight on April 1. “A million dollar deal has been made and I could not be happier.”

Just a tweet wasn’t enough for dafran, so he got on Twitch and streamed a full 10 hours of Paladins for viewers.

We are looking to bolster our already dominant roster with the introduction of the Defiant Duck. Good luck in Stage 2, other OWL teams… #RiseTogether pic.twitter.com/FqyELcouNt

Instead of saying they had signed a player from another team, the Toronto Defiant announced a brand-new player joining the team from out of nowhere.

The Defiant Duck is apparently not just a pool floatie, but the newest, rudest member of the Toronto Defiant.

Just how it will play Overwatch with no fingers, or arms, remains to be seen, but the Defiant seem pretty confident in their latest pickup. 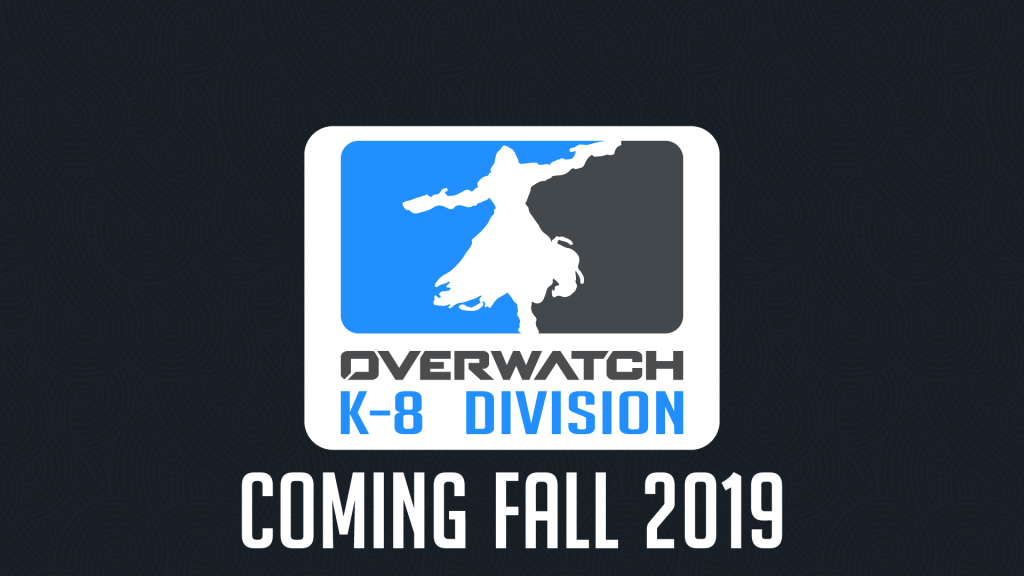 The Overwatch League has an age limit for players where they have to be at least 18 years old to compete, but Blizzard seems to be exploring new ways to start developing talent for teams even earlier than Contenders.

According to Fight on Point, there will be 64 teams in each bracket representing grade schools across the country in the competition and Overwatch K-8 promises to add 576 new competitive Overwatch teams in total.

Some schools around the country are even scrambling to add Overwatch esports training to student’s daily curriculum, in place of less useful skills like english or art. 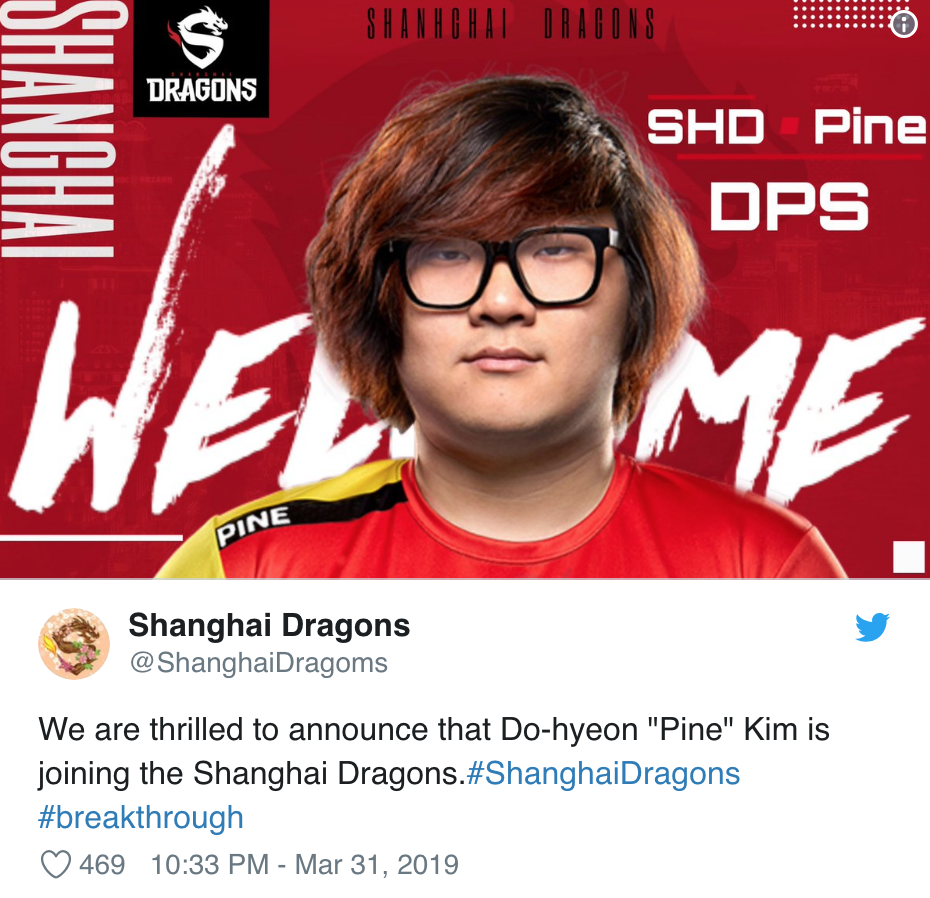 Like Jake on the Outlaws, Do-hyeon “Pine” Kim is one of the New York Excelsior fans favorite players, so any news of him leaving the team would be monumental.

So on April Fools day, Overwatch League fan Sharpysenpaii went so far as to make a fake Twitter account that resembled the official Shanghai one and drop a bombshell no one was expecting.

Obviously, Pine is still safe and sound on the Excelsior, but he does look pretty good in yellow and red, just saying

4. Seoul Dynasty X Chengdu Hunters team up for remainder of the season 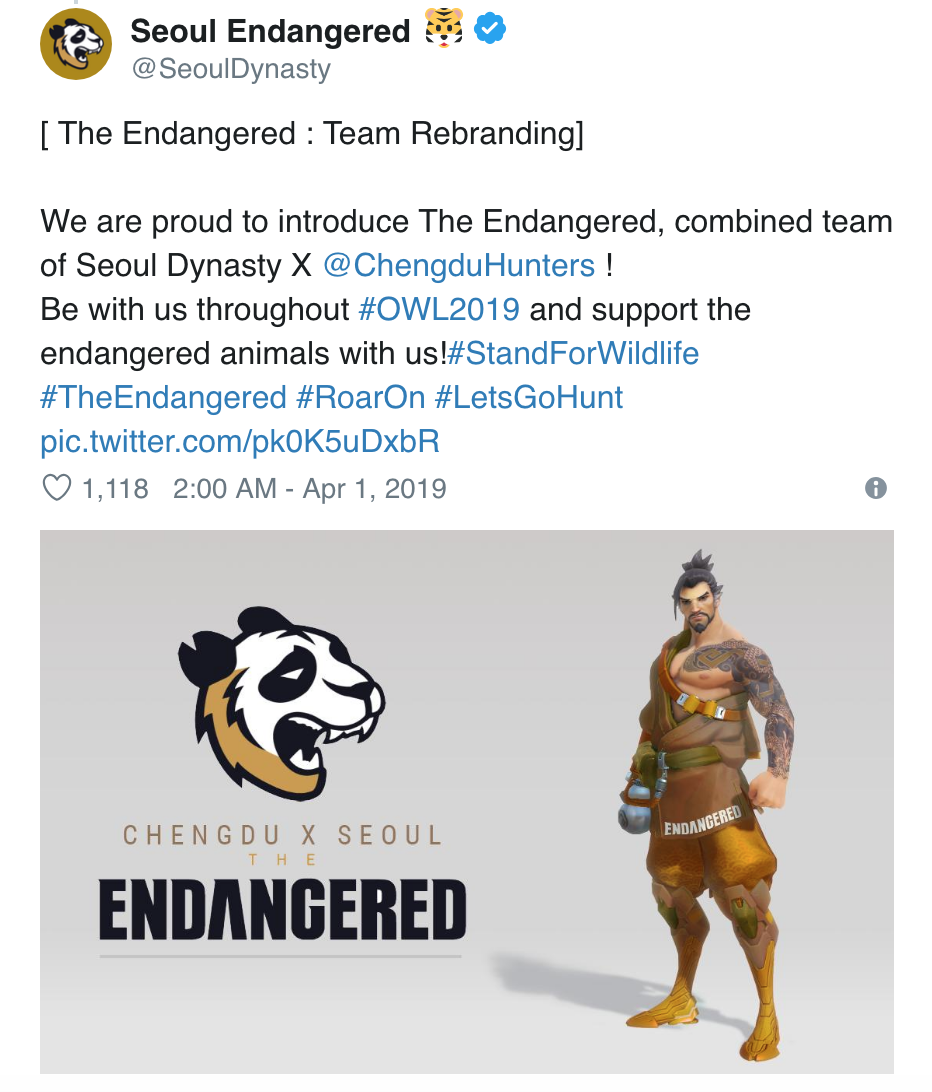 In what might be the most wholesome Overwatch jebait from April Fool’s Day 2019, the Chengdu Hunters and the Seoul Dynasty announced they would be joining forces to as one team called “The Endangered” for the remainder of the season to benefit endangered animals.

Both teams went all out for the sell, revealing a brand new logo and custom Overwatch League skins – for Hanzo of course – to commemorate the new team and even a new roster, mixing up players from both teams.

Even though the crossover team is only a joke, helping out endangered animals would be a great cause for an Overwatch League team to get involved with.

3. Custa heads to the Boston Uprising 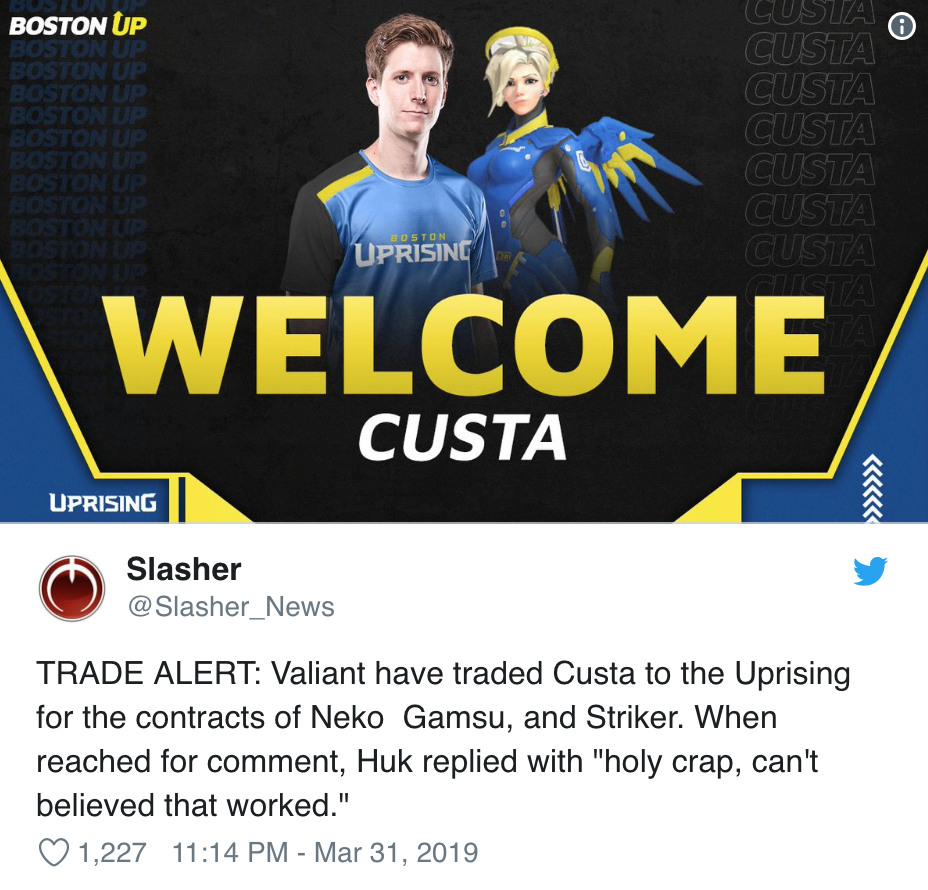 Scott ‘Custa’ Kennedy currently plays support on the Los Angeles Valiant, but esports insider Rod ‘Slasher’ Breslau decided to pull a fast one on Overwatch League fans by reporting that Custa was headed to the Boston Uprising.

“TRADE ALERT: Valiant have traded Custa to the Uprising for the contracts of Neko Gamsu, and Striker,” Slasher wrote on Twitter. “When reached for comment, Huk replied with “holy crap, can’t believe that worked.” 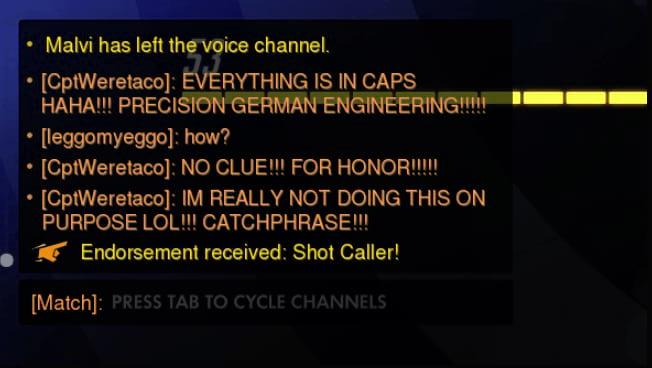 Reinhardt players will find all of their messages automatically adjusted.

Blizzard, not to be left out of the April Fools Day fun, decided to add a hilarious feature to in-game chat for players on Reinhardt.

While playing Reinhardt, every message players enter is turned into all capital letters and adds an additional Reinhardt voiceline at the end.

So, for example, instead of “Please get off of Widowmaker” your teammates will see something like “PLEASE GET OFF OF WIDOWMAKER!!! CATCHPHRASE!!!” in chat.

Unfortunately, the new feature is only available on PC, since console Overwatch doesn’t have in-game text chat.

Mercy is one of the most popular Overwatch characters, but some who have played her since Overwatch like to complain that she’s now nowhere near as useful as she was in the past.

So, one clever/cruel Overwatch fan named itsjieyang, who usually makes gifs for every update, decided to make a realistic-looking patch notes rundown that included a buff to Mercy’s healing.

Ana, Tracer and Roadhog also get buffed, while Sombra, Hanzo, Widowmaker and D.Va all get nerfed.

Even though the patch notes are fake, some players probably wouldn’t mind if the Mercy or Roadhog changes actually happened.