An Overwatch player has discovered another incredible Easter Egg hidden in the sprays of new hero Sigma.

Sigma is the latest addition to the Overwatch hero line-up and currently available for testing on the Public Test Realm (PTR). After Blizzard made his cosmetic options available, players noticed an Easter Egg hidden in one of his sprays.

While skins are usually the main source of interest for players, some noticed an Easter egg in one of Sigma’s sprays that showed a scan of his brain featuring what looks like a homage to the photo of a black hole that went viral earlier in the year.

With Sigma being an astrophysicist – albeit one who’s been turned into a living weapon with the ability to manipulate gravity and is unwittingly working with terrorist organization Talon – this reference seems appropriate, but now another apparent Easter Egg has been found that relates to another aspect of his character.

As u/pressure_ identifies, Sigma’s ‘Night Sky’ spray appears to be an homage to Van Gogh’s famous “The Starry Night” painting, featuring Sigma alongside several of his hyperspheres in a similar style to the stars and sky in Van Gogh’s work. 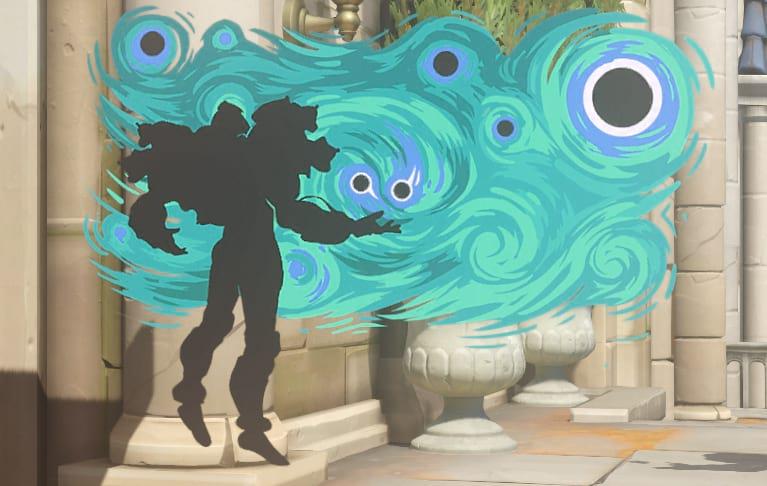 The spray goes much deeper than a simple reference to a well-known artwork, however. There are some direct correlations between Sigma and Van Gogh – not only are both Dutch, but The Starry Night was painted during Van Gogh’s time in an asylum after a breakdown, while Sigma’s story also sees the character quarantined due to the psychological damage he suffered, and Blizzard deliberately played up the “asylum look” in his design.

Beyond the factual, u/pressure_ also makes the case for further metaphorical alignment between Sigma and Van Gogh, and The Starry Night in particular:

Easter eggs like this may not have much of an impact on the game, but they do reveal how much thought Blizzard put into all aspects of a character, even for details that most players may never notice.