The official Overwatch Twitter account poked fun at a Naturo runner at the Storm Area 51 raid on September 20.

“Storm Area 51, They Can’t Stop All of Us” started out as a harmless Facebook event, but soon spiralled out of control after millions of people responded to the event as “going”.

Area 51 has a rich history in American culture as being a mythical place where aliens and UFOs are stored and researched under strict government secrecy. The idea to have millions of people storm the facility actually had legitimate support despite being intended as a joke. 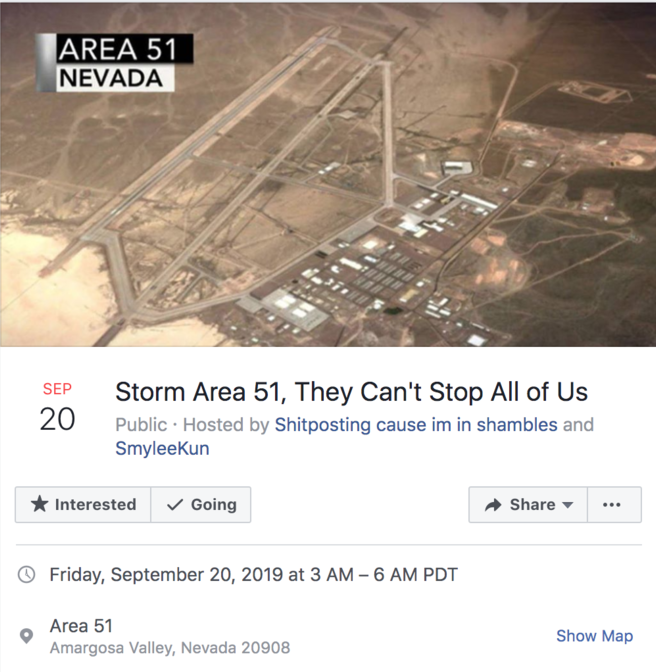 A Facebook screenshot of the now-deleted event.
600[ad name=”article2″]

“We will all meet up at the Area 51 Alien Center tourist attraction and coordinate our entry,” the original event text read. “If we Naruto run, we can move faster than their bullets. Let’s see them aliens.”

While event creator Matty Roberts eventually deleted the event and government officials even warned people against trespassing, people from all over still showed up to the event which had morphed into music festivals dubbed “Alienstock” and the “‘Storm’ Area 51 Basecamp Experience”.

Amusingly and now famously, during a 13 Actions News report from the event, a festivalgoer performed one of the previously referenced “Naturo runs” during a report’s hit on live TV.

The video quickly spread across the internet and was turned into gifs and memes. Even the official Overwatch Twitter joined the fun with a video of their hero Moira doing her Naruto-inspired run on the Temple of Anubis map along with her voice line “science will reveal the truth”.

Could there be more to this meme?

The item, a snow globe of sorts with the word “GREY” on it showed up with no context leading some to believe this could be a hint at a new map or soon-to-be-announced hero.

Player of “Find Items” mode accidentally found a new strange teaser in Ecopoint. What do you think? from r/Overwatch

Interestingly, the Greys are the same as the stereotypical alien species depicted in science fiction with their big heads and dark eyes. Would Overwatch’s next hero be some sort of alien?

For a game with talking gorillas, robot monks, purple-skinned snipers, teleporters and mech-sized wrecking balls piloted by hamsters is an alien too much of a stretch? We’ll have to wait and see.