This year, Tracer, Genji Winston and Mercy are headed to what could be a new map: Havana, Cuba.

Fans already got a look at Baptiste’s new Talon skin, but it seems like one skin wasn’t enough for the Overwatch team, so they decided to bless us with two previews in one day. 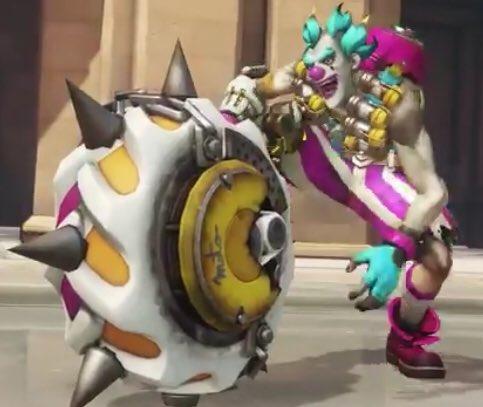 What makes a clown?

Junkrat certainly looks the part, with some great teal hair and face paint that will give you flashbacks to when that irresponsible older sibling let you stay up when mom and dad weren’t home and watch Stephen King’s IT.

Even his tire has gotten funnier, somehow, with snazzy white walls instead of the regular black rubber.

This skin doesn’t change a whole lot, so it’s probably safe to say that this is an Epic, rather than a more expensive Legendary.

Hopefully it comes with some sound effects, maybe an evil clown laugh after killing an enemy with RIP Tire? Just a thought.

It’s a perfect day for some mayhem.

The clown is here, what else do we know?

Besides Junkrat’s new skin, a leak from April 9 seems to indicate new skins for McCree, Bastion, Ashe/B.O.B. and Baptiste and after the first new skin reveal on April 10, it looking more and more like the leak was legit.

As for the Storm Rising mission itself, we know that a new map, Havana, could be the setting for the PvE mission, but so far no news about a new map has been teased by Overwatch.

More details on the event should be coming in the days leading up to Storm Rising, which starts on April 16.