Bucks Gaming slammed for paying designers in “exposure” instead of cash

The NBA 2K league’s Bucks Gaming took some flak on social media after they offered payment in exposure and “free” merch for designing their next Twitter header.

Bucks Gaming represents the Milwaukee Bucks in the NBA 2K League – a joint venture between the NBA and Take-Two Interactive, the parent company of 2K Sports.

The Bucks finished 8-8 after the League’s second season in 2019, but it wasn’t a surprise offseason acquisition that had people talking about the team on November 12.

The Bucks Gaming Twitter header when they announced the “contest”.

Why are people mad at Bucks Gaming?

Seeking a fresh new Twitter header for the offseason, Bucks Gaming took to Twitter and put out an open request for “all GFX artists” to take a shot at designing it for them.

In the now-deleted Tweet, the org offered free merchandise and exposure for their chosen winner on Twitter and Instagram as compensation for the work – but as the ratio on their tweet shows, the response probably isn’t what they were hoping for. 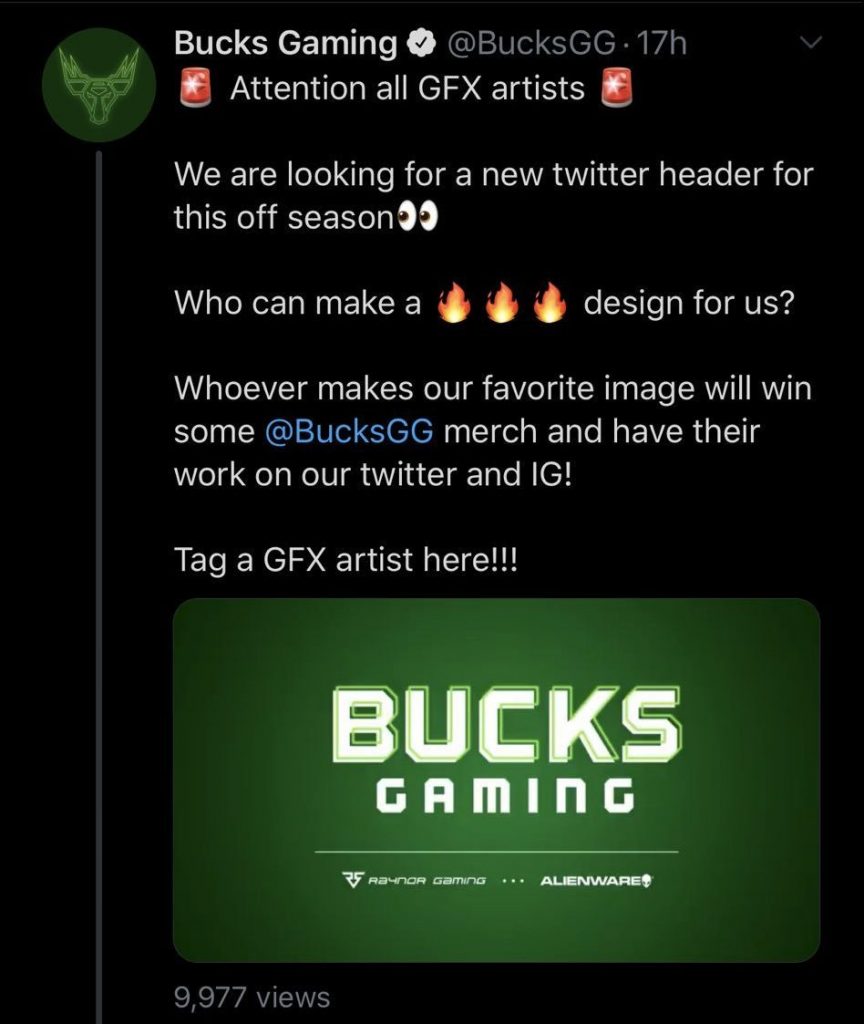 The ratio was not in the Bucks favor before the tweet was deleted.

The Bucks didn’t use the dreaded E word directly, but they also didn’t offer any money for the job, which professional artists usually like to receive for their work.

One of the most popular contributions was a slight redesign of the current Bucks header by @Quasimodox to reflect how well-received the contest was on Twitter.

My submission, I hope I win~ pic.twitter.com/pIEBUEFCri

An artist on Twitter named @DesignbyMalice was even told to “get a job” by the Bucks account after suggesting paying participants.

What a way to carry a business @bucksgg. Paying designers with merch ? What bills can we pay with that. My job is a graphic designer and self employed. Companies like you and many others is a perfect example on how graphic and motion designers are undermined and undervalued. pic.twitter.com/b2B8iftEJV

Finally, user @SGBluebell provided the perfect video summary of the Bucks Gaming’s day on Twitter and the response to their “contest”.

The practice of payment in merch isn’t at all new to esports: CSGO’s Team Dignitas was infamous for paying people in mousepads during the early days of the org – a far cry from a team in a league backed by the NBA.

Perhaps, if the Bucks had just called it a “contest” in the first place and opened it to all fans (rather than “GFX artists” specifically), they could have made it a fun offseason venture with little to no social media blowback.

Instead, the team has more attention on it than at any time in recent memory – but not for a reason any org or social media manager would ask for.