Actor Jerry Ferrara Praises the Players of the NBA2K League

Jerry Ferrara, the star of TV series Power, tweeted his support for the work of players involved in the NBA 2K League.

Ferrara works as a Creative Consultant for the New York Knicks Gaming team that competes in the 2K League.

He is also the Head Talent Scout for Knicks Gaming, which gives him perspective on what it takes to become a professional gamer.

Ferrara tweeted about the dedication involved in becoming a 2K League star. 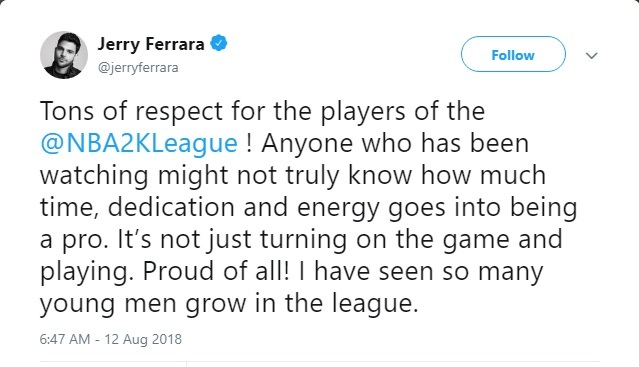 He also had a special tweet for the players of Knicks Gaming, hyping them up for the 2K League playoffs. 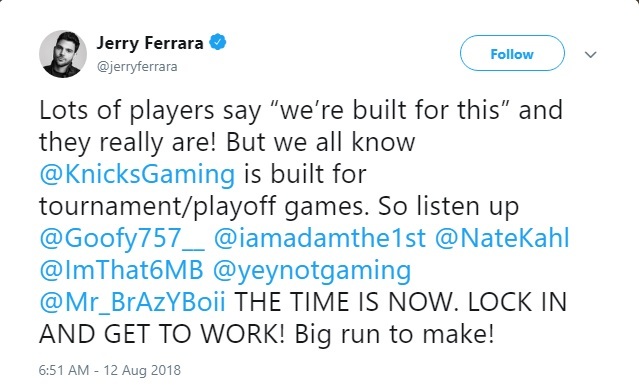 It was a rough season for Ferrara’s Knicks Gaming, who struggled as much as the NBA Knicks on the way to a 5-9 record.

Knicks Gaming finished the year in 14th place out of 17 teams, but went on a miraculous run in ‘The Ticket’ tournament to earn an automatic playoff bid.

Jerry Ferrara is best known for his work as ‘Turtle’ on Entourage, which ran on HBO for eight seasons and was turned into a feature film.

The inaugural 2K season stated in May and Ferrara has been working with the Knicks Gaming organization since December of 2017.