Madden 19 Ultimate Team in Madden 19 is still grinding on with a fresh new set of Madden Daily Drops coming on March 29.

The Series 6 update dropped on March 29 along with a new promo and currency, called Path to the NFL Draft and “Picks”, respectively.

A major member of EA’s social media team, Mike “MUTGuru” McFadden, also announced he was one of the 350 reported members of EA employees to be laid off, adding a somber note to what was an otherwise lackluster launch of a new program.

Path to the Draft Promo

A total of 44 new items were added to the game Friday, but like much of their recent content, it appears as if EA will be slow-rolling the new promo as 32 of those items cannot be quicksold or put into sets until April 23 according to the card description.

Those cards all highlight a different 2018 first-round pick, so it’s quite possible they’ll tie in with a prospective team come the 2019 NFL Draft, but the powers-that-be evidently were fine withholding that information for a later date, which could come as early as Sunday based on some rather obvious hints laid out on stream.

15 “Path to the Draft” solos (and one Daily Draft solo) will award the aforementioned NFL Draft collectible pieces, but it’s anyone’s guess as to how they’ll factor into Madden Ultimate Team. 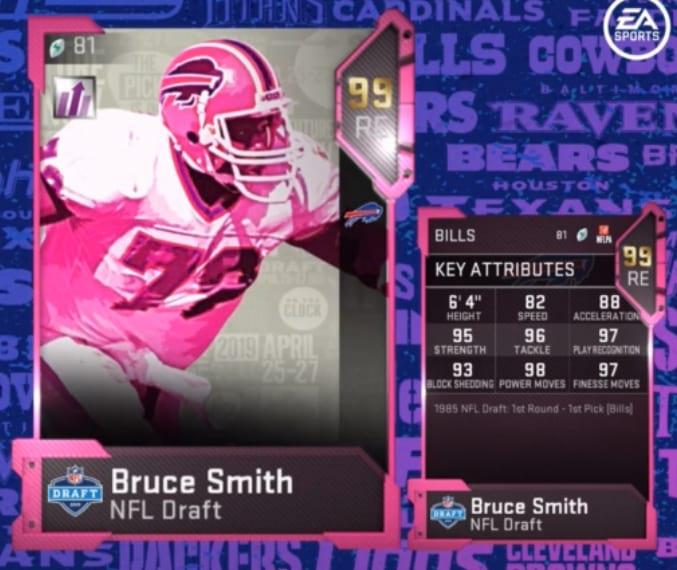 Bruce Smith will be among the best defensive lineman in Madden Ultimate Team, and he should be fairly affordable with this set.

The cards actually available Friday are quite strong, but that shouldn’t come as much of a surprise given there’s essentially only two or three months left in #MUTSeason.

99 overall right end Bruce Smith profiles as the “first” NFL Draft Master Set item, with personalities on stream subtly hinting more could be on the way. To get the Legend defensive end, users will need to acquire three specific 98 overall items and put them in a set which will yield Smith, and the specific trio in non-auctionable/tradable form. 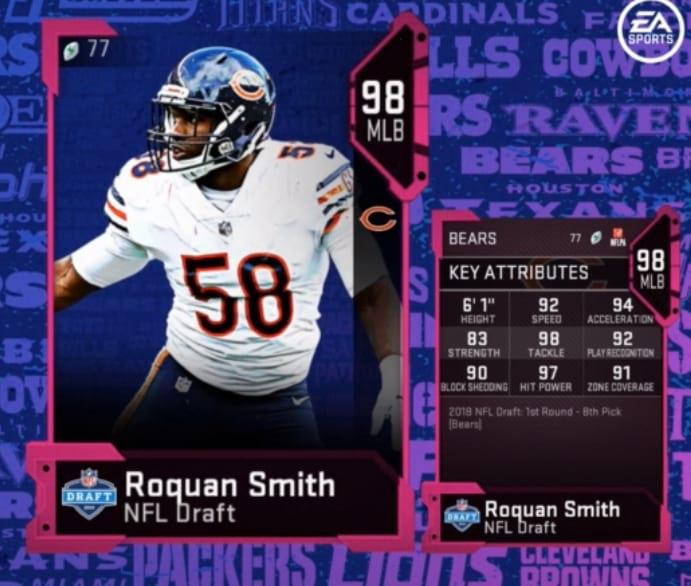 Roquan Smith doesn’t have a Power-Up, but that should be changed fairly quick thanks to his NFL Draft item.

That’s especially important for 98 overall middle linebacker Roquan Smith, who currently does not have a Power-Up option, and thus would be a disappointing NAT item.

He’s almost assured a Power-Up, perhaps as early as Sunday, given EA has previously released Power-Up items for set rewards that haven’t had them in the past. 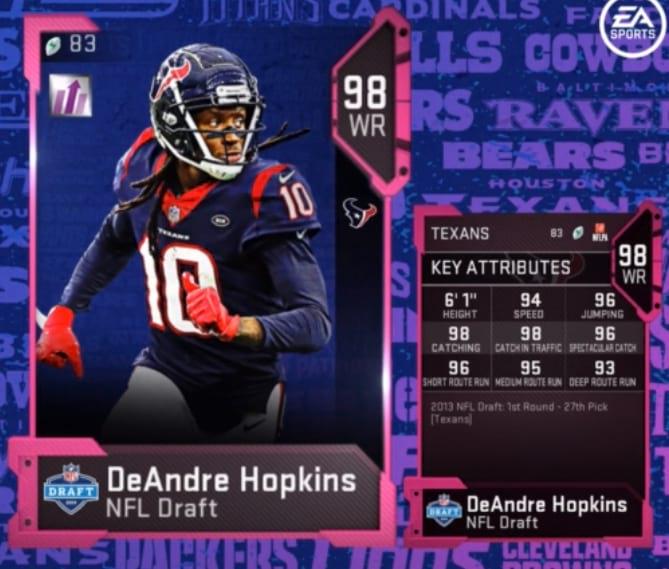 DeAndre Hopkins is a significantly better real-life player than his Madden Ultimate Team stats would indicate.

Hopkins is the second 98 overall player needed to fulfill the Smith requirements, giving the Texans wide receiver his highest upgrade since the NFL Playoffs 95 overall edition which released in January.

94 Speed isn’t exactly enticing for a player as dynamic in real-life as Hopkins, but that can easily be addressed in specific theme teams. 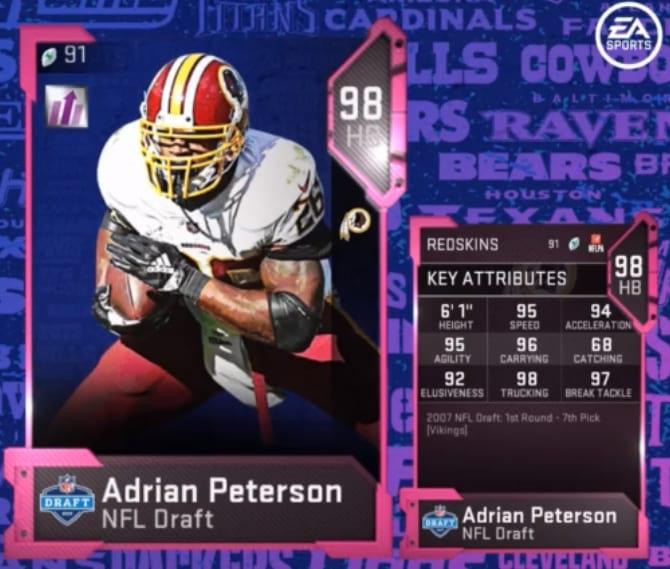 Peterson certainly fits the promo’s theme, highlighting past NFL Draft players who have made a major difference in the NFL.

Peterson won’t present much of a scare when it comes to his receiving prowess, but situated with the right chemistry boosts, Peterson could be one of the fastest power backs available in Madden Ultimate Team at the moment. 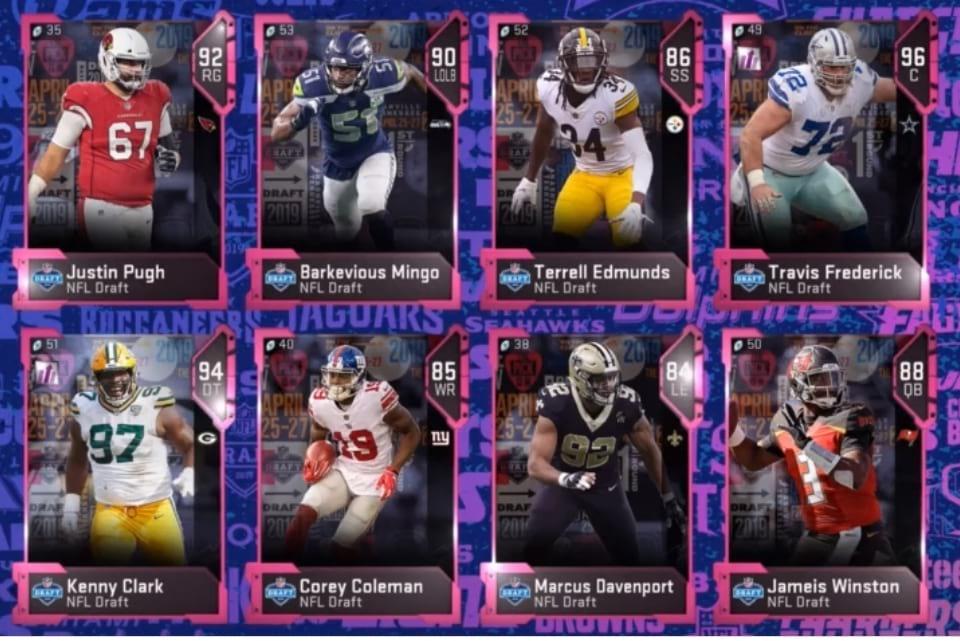 A bevy of theme team options round out the rest of the currently released NFL Draft players, including Travis Frederick and Kenny Clark.

The rest of the NFL Draft available players are essentially just quicksell fodder using the new “Picks” currency as a way for players to interact with one of the two “Store” options available, and likely will only be relevant on theme teams. 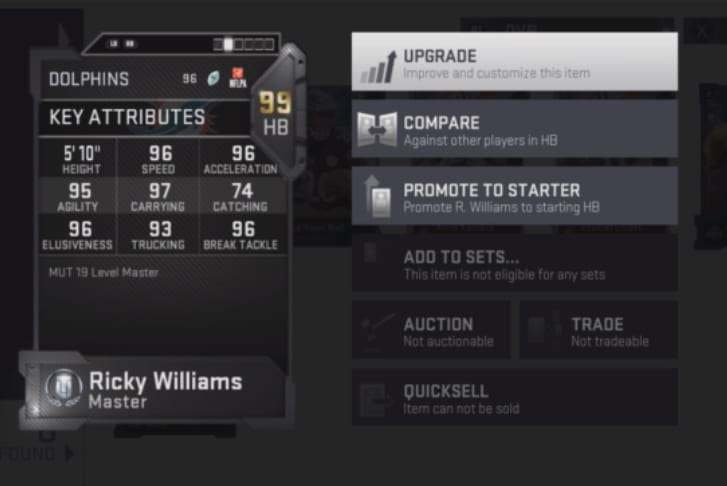 While Williams is technically “free”, the grind for a sub-optimal running back might make the Legend obsolete for the rest of #MUTSeason.

As usual, Ricky Williams received an update based on the increase level cap, providing the free-to-play running back with a new 96 speed option should users grind through the appropriate levels.

That’s about the only stat that is truly enticing for Williams, however, as a bevy of other running backs have finally begun to surpass the former Dolphins and Saints legend. 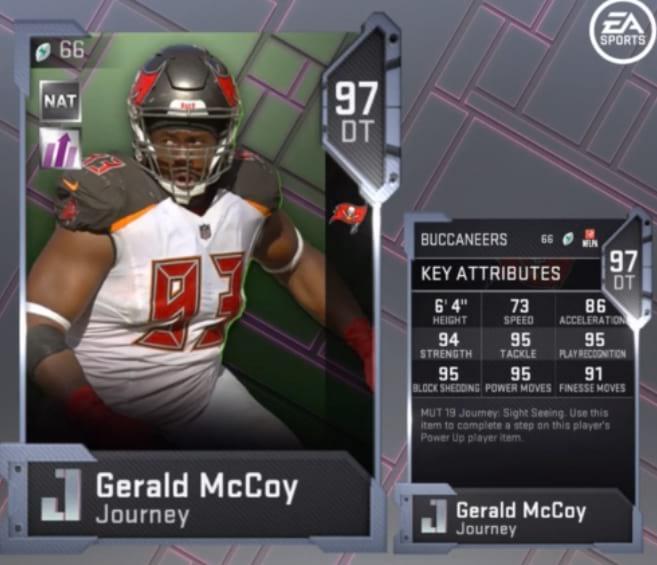 McCoy certainly needed an upgrade despite the fact he might not play for the Buccaneers by the start of 2019.

113 new Journey solos entered with Series 6, with the end reward featuring 97 overall NAT defensive tackle Gerald McCoy. The Buccaneers DT, who has been heavily rumored to be potentially released during the NFL offseason, last saw an update during the Thanksgiving promo in November and was likely due a new iteration despite his struggles during the 2018 campaign.

Playing 20 games of any kind will reward users with another Team Captain token, although it appears like this is more of a feature for new Madden users, as players who already have their team captain to 99 overall will be allowed to put the token in an upcoming set at a later date.

Finally, Series 6 also saw an update to the available head-to-head sets, with the top prize yielding what everyone in Madden Ultimate Team really wants, another tight end! (heavy sarcasm) 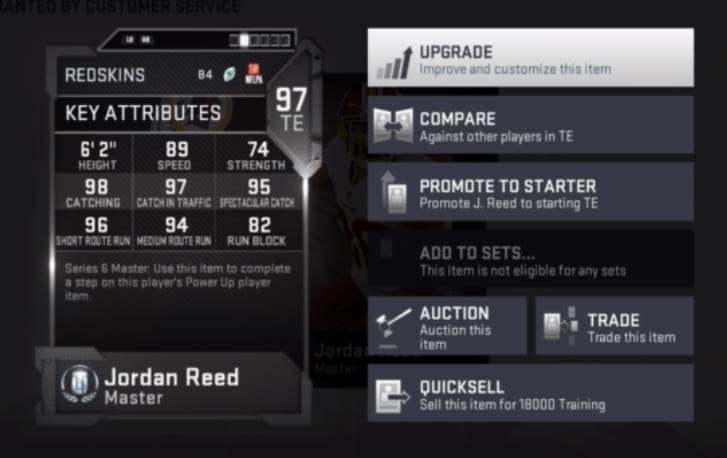 This is about as tone-deaf as a master award can be, with five 97 overall TEs dropping in the past month and a half alone.

Yes, Redskins injury-prone tight end Jordan Reed is the 97 overall Master item, available for 94 Series 6 trophies, or 47 Series 6 trophies if you really want to get the NAT version of Reed.

With many users already securing their end-game tight end in the form of 99 overall Career Tribute Rob Gronkowski as part of the Double House Rules event, it’s fair to suggest this will be by far the least interacted Series master reward to date.

Mike “MUTGuru” McFadden revealed at the end of Friday’s Madden Daily Drops stream he was laid off during a wide scale EA global cutback.

McFadden, who joined EA in 2014, was instrumental in providing updates to the Madden Ultimate Team community and pushing the game mode to what it is today, specifically helping to build the Twitter page to nearly 750,000 followers.

Given communication has already been an area of frustration within the Madden community, it’ll be interesting to see whether EA will have a different plan of attack for disseminating information to its users after laying off one of their instrumental leaders.