Another update to the NFL Free Agency program launched into Madden 19 Ultimate Team, providing a handful of obvious names for PS4, Xbox One and PC users to wait to acquire their respective team chemistries.

Following the release of two Limited Time 98 overall items, Nick Foles and Anthony Barr, March 13’s drop was much more mundane, with 95 overall Tevin Coleman headlining another round of 16 players who will get updated as the real-life NFL Free Agency progresses.

The newest release certainly got a jolt with the emergency addition of Movers Odell Beckham Jr and Antonio Brown, the third and fourth “true” 99 overall cards to join Madden 19, but the hard-to-come-by cards don’t do much to shake up the current edition of the NFL Free Agency promo. 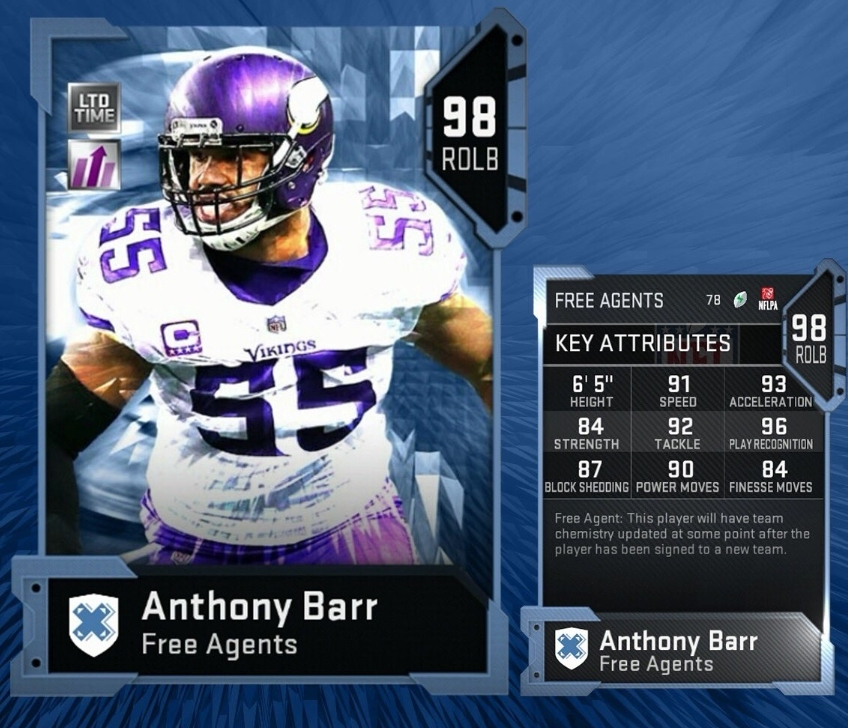 LTD Barr will retain his Vikings chemistry after re-signing with the team in free agency.

For what it’s worth, Coleman has 97 Speed, which will be an enticing option whenever he does wind up on another unit.

And some of the higher FA items such as 94 overall newest Packers addition, Preston Smith, or even 95 overall Browns defensive tackle, Sheldon Richardson, could likely be chemmed up to the point where their ratings aren’t entirely disheartening.

Given the sheer excitement of the current NFL Free Agency period, though, the ratings of the majority of the items are substantially lower than you’d expect for a Madden Ultimate Team promo in March. 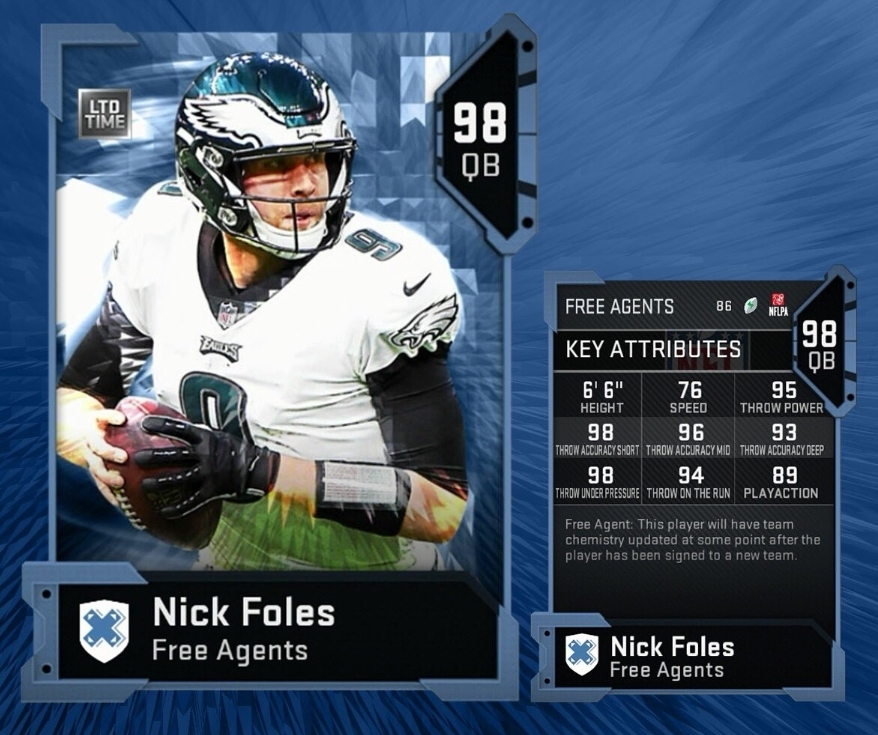 Foles figures to be one of many LTD items released as part of the NFL Free Agency promo.

Just eight of the current 52 Free Agent options are 95 or higher overall, with another 12 slotting into the 90-94 range.

At least for the latter group, those players would take significant chemistry options in order to power up to any sort of relevance, making this somehow one of the least impactful, yet incredibly potentially enticing, #MUTSeason promos in recent memory.

We still don’t know “how” EA will apply team chemistry’s, with the possible allure of x3 chem for some of the higher options potentially saving what has been an otherwise uneventful first three days to a multi-week promo, but needless to say, the big guns have yet to be released.

Again, the above rant does not take into account the two newest 99 overall cards, as both figure to be valuable thanks to their star power and unique card art. 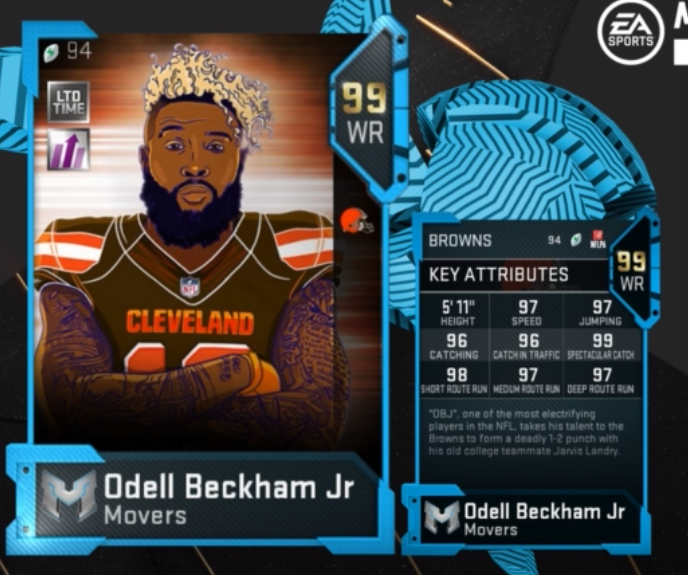 Odell Beckham Jr received arguably one of the coolest looking cards to date after his trade to the Browns.

Odell Beckham just saw a 97 overall item released two weeks ago as part of the NFL Combine promo, but will receive a 99 overall item thanks to his trade to the Browns. Given the 97 version already had “end-game” stats, this was more about providing a Power-Up option for Browns theme teams, but it’s worth pointing out this has to be one of the more creative card arts of Madden Ultimate Team history – certainly of Madden 19.

That last fact alone should make Beckham’s card quite valuable for those who aren’t interested in using Training Points to acquire the Powered-Up version. 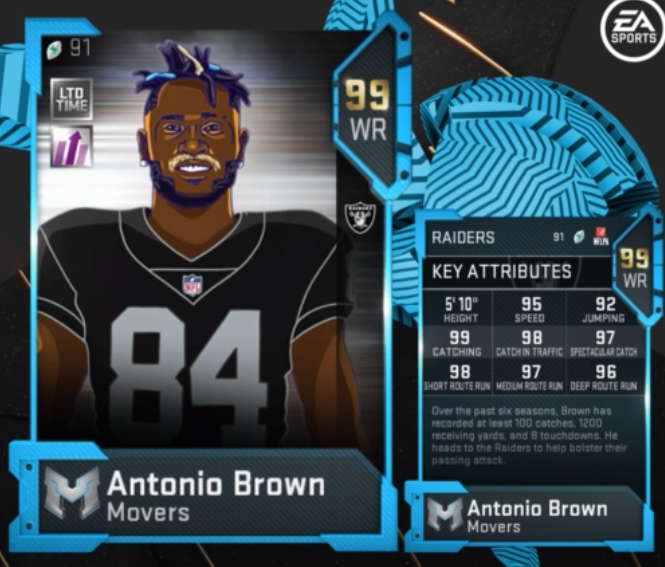 The newest update even features Brown’s blond mustache, which grew in popularity throughout the receiver’s demands for a new team.

The same could be said for Madden 19 coverboy Antonio Brown, who was also traded during the offseason, albeit to the Raiders. Brown’s item is still disappointing “slow” at 95 Speed, but he’ll be easy enough to get higher if you have the capital to invest into the Power-Up version.

Both Beckham and Brown fall underneath the “Mover” item as opposed to the NFL Free Agency promo which is at least moderately eyebrow raising, but representatives on EA’s Special Edition Madden Ultimate Daily Drops stream made sure to strongly emphasize this was just a one-time deal.

It’s a bit sad to see this only utilized for the two star players traded, given the amazing card art and the bold blue frame, but it makes sense to emphasize the past two Madden cover athletes. If nothing else, this has to be one of the more creative, and reactionary, limited time drops in recent Madden history, and for that we commend EA.

New House Rules is easily one of the best EA has implemented to date.

In non promo news, a new Limited Time head-to-head event was released Tuesday, and will conclude on March 14 at 7:30am PST / 10:30am EST / 2:30pm GMT. Following a mediocre event last week, this version of House Rules is certainly enticing, with the final reward yielding a non-auctionable/tradable 97 overall NFL Combine card.

Forget the actual house rules (only two downs, but you start with a 1st and five), which are fun, legitimately creative and directly change the format of football. Needing just 10 wins – not six straight wins against other players as has been the case in most of these – has generated a refreshing swelling of positive support. 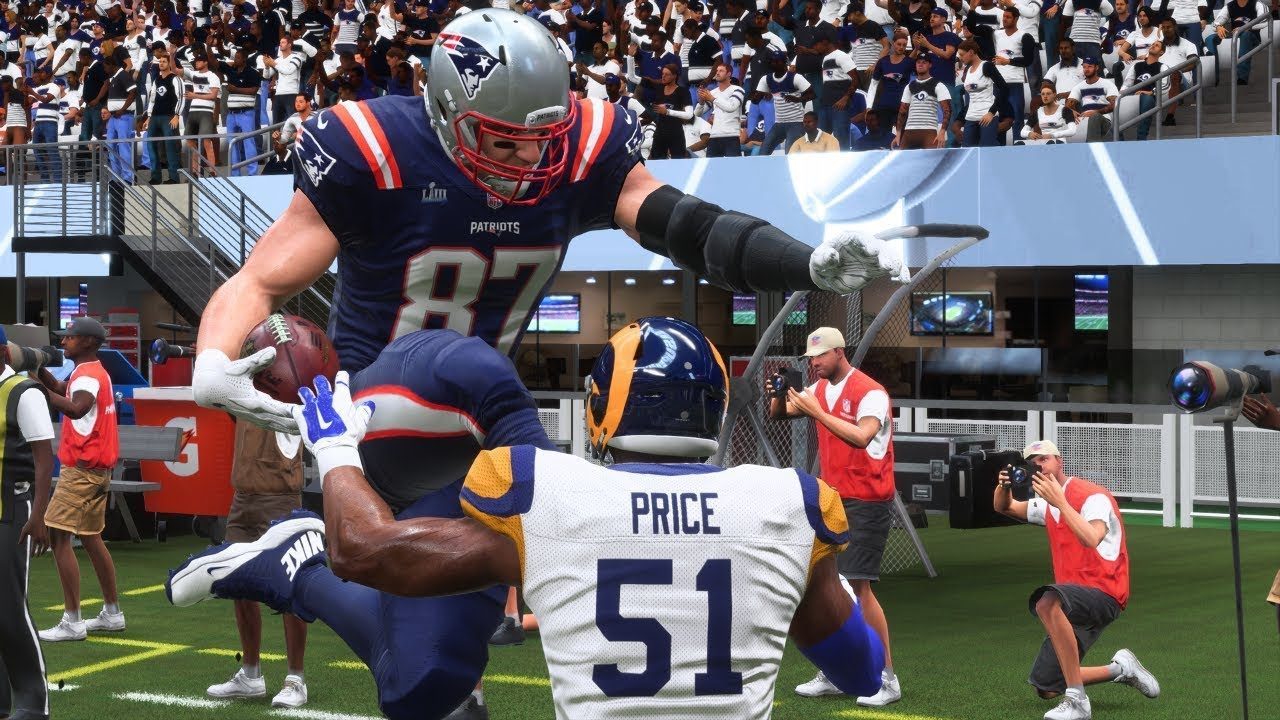 Have EA finally hit the jackpot with Madden Ultimate Team?

There still is a reward for posting a 6-0 record (a smattering of coins as well as Series 5 trophies), but to have the true prize available through a little bit of grinding and some luck is truthfully a godsend, particularly in a meta where the “fall forward glitch” is still readily apparent.

So long as EA continues to listen to the positive feedback and implements actually worthy rewards for a set win total as opposed to a massive winning streak, House Rules could wind up being one of the best things implemented in Madden 19, not just during the Madden Ultimate Team season. 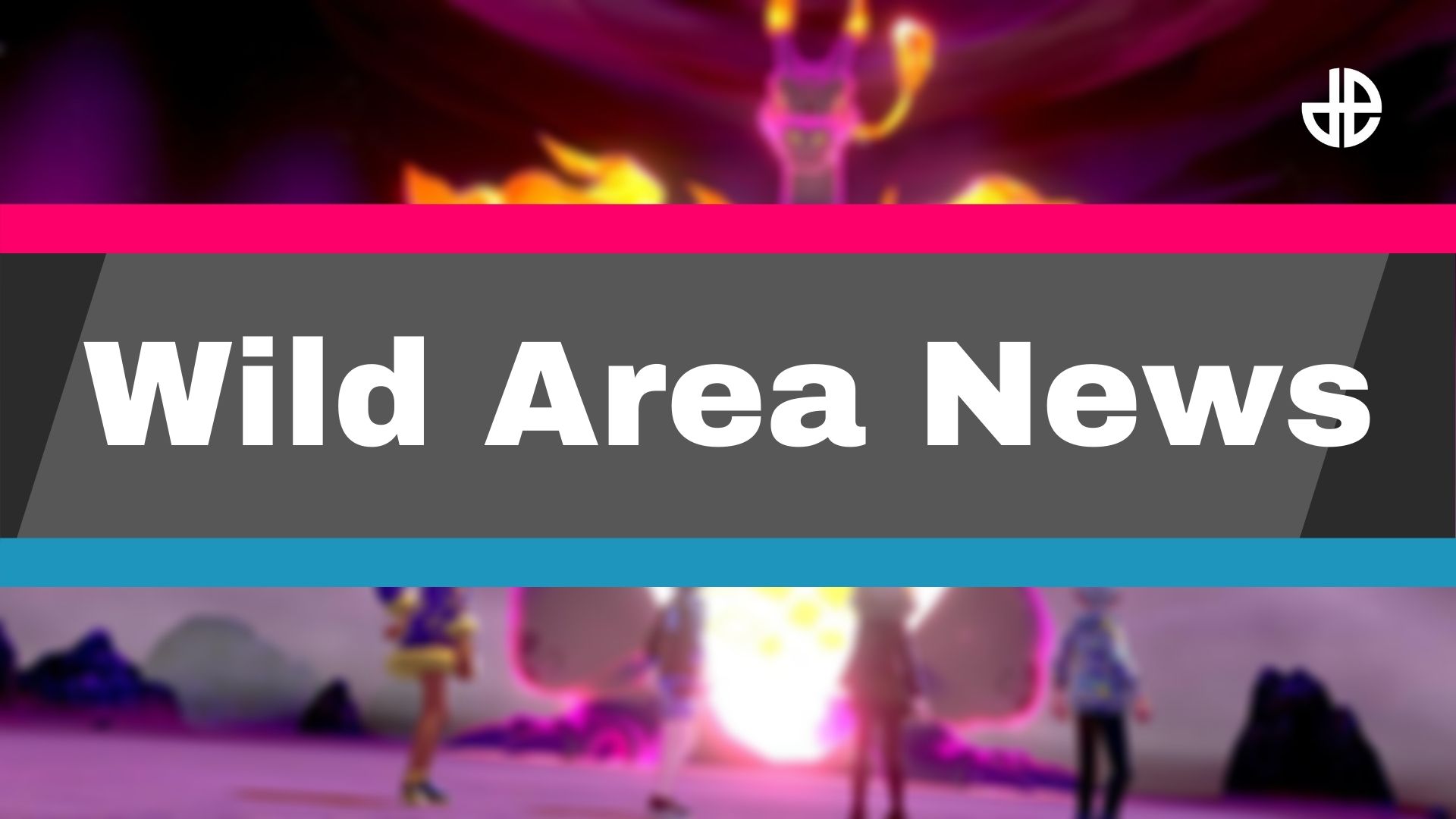