The first ever Madden Daily Drops stream certainly yielded information equal to the rarity, revealing 30 different Team of the Year players, all of which between the 94 to 98 overall range.

MUT fans will have to wait till Monday at 10:30 a.m. ET in order to indulge in the program, but it certainly won’t quell the excitement.

While it doesn’t quite repeat the similarities of Madden 18’s arguably most beloved promo, this version of Team of the Year is pretty darn loaded, with the addition of “speciality” players replacing Rookie of the Year players. 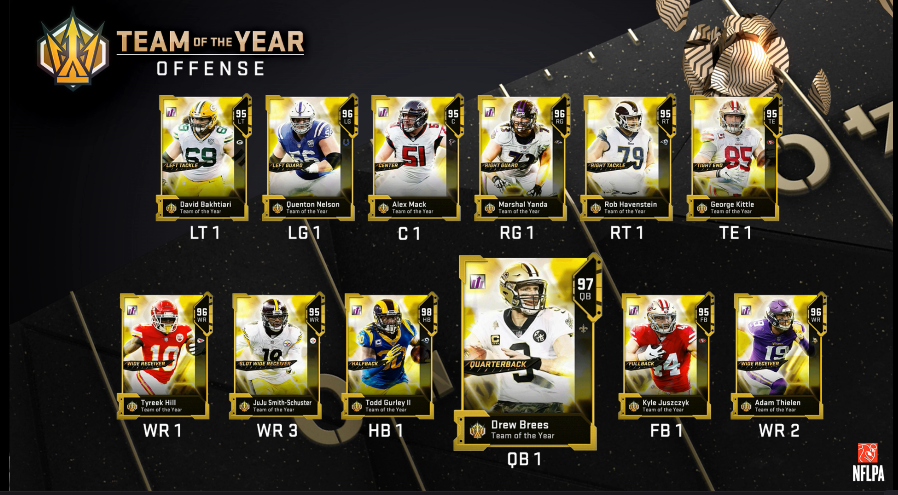 Only 12 of the 30 items are higher than 95 overall, but given many of the upgrades went to previously lower rated players, this promo did well to highlight a handful of players who otherwise might not have been in position to see a boost. 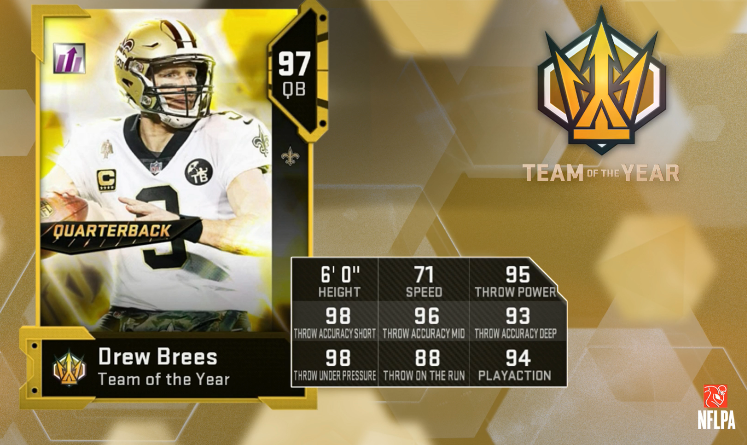 In the past, EA has made separate upgrades for cards based on players who win real-life awards, setting the stage for Brees to potentially receive two 97+ overall items in the next three weeks. 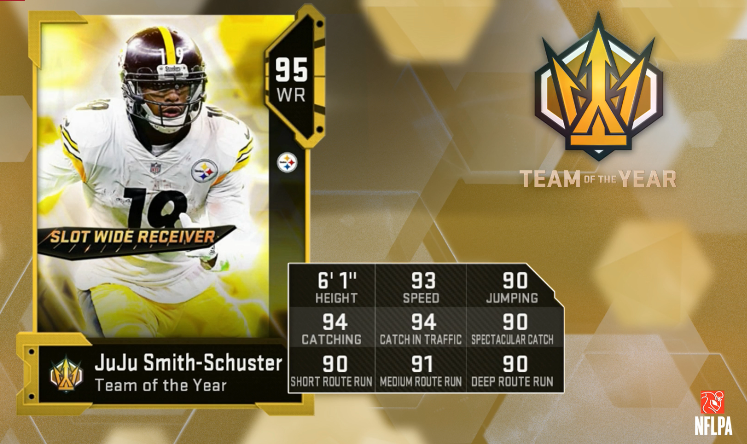 While JuJu Smith-Schuster saw an upgrade near the end of December, this version actually represents one of the league’s leading receivers instead of his pithy 90 overall Zero Chill elite.

And the addition of Tyreek Hill, who hadn’t gotten an upgrade since the Blitz promo also made sense given his game-breaking speed. However, it’s the decision to include Adam Thielen over the likes of Davante Adams that is arguably the most troublesome decision of the entire program. 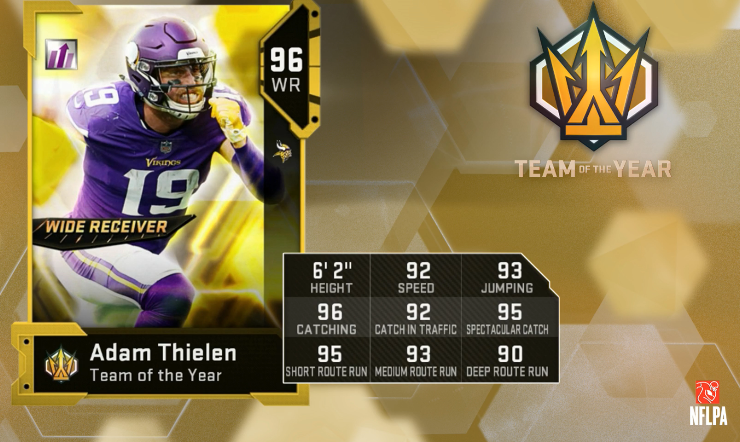 Despite posting more touchdowns and only marginally fewer receptions, Adams, whose 92 overall Flashbacks card dropped in middle November, has been noticeably ignored throughout the season despite posting top-five receiving statistics.

You could argue the same could be said for Thielen, at least the Vikings star receiver earned a 93 overall card for his real-life performances throughout the season and previously received a 90 overall Team of the Week upgrade in the past. 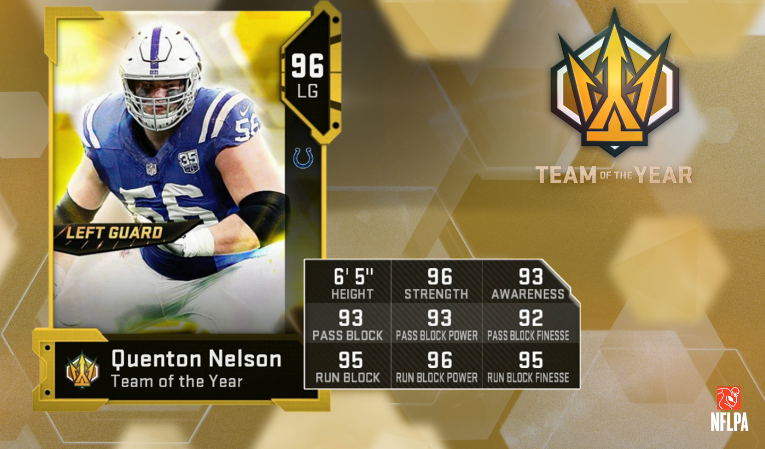 Transitioning to the trenches, Nelson stands out along the offensive line given his Rookie Premiere card will be receiving a similar upgrade.

Fun fact – with the addition of 95 overall RT Rob Havenstein, there will be as many 92+ overall right tackles in Madden Ultimate Team as there are punters. Hopefully this is an area that will be corrected in the future. 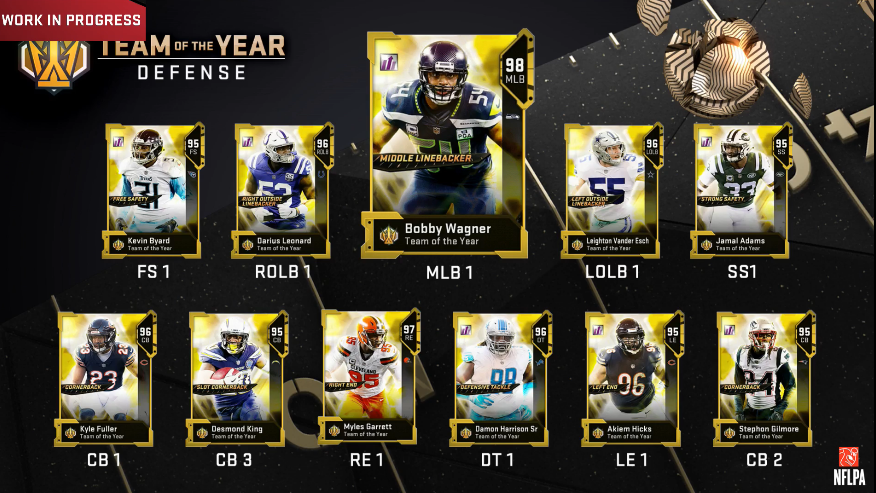 Compared to the likes of the offensive side, the defense is pretty cut and dry. Major stars like Von Miller and Aaron Donald weren’t included in this promo as they are expected to receive some sort of real-life award in the upcoming weeks, likely meaning EA has them earmarked for an upgrade at that time. 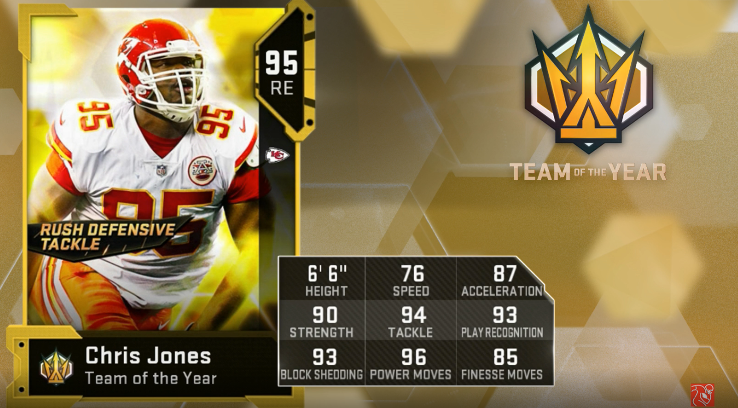 It’s a bit bizarre that a young player with 15.5 sacks only had a 92 overall item heading into the playoffs, but EA attempted to rectify the issue by giving Chris Jones a 95 overall here.

While true defensive ends will never play to their real life counterpart thanks to the lack of speed, it’s at least encouraging to see one of the premiere interior pass rushers get an item closer to his actual play. 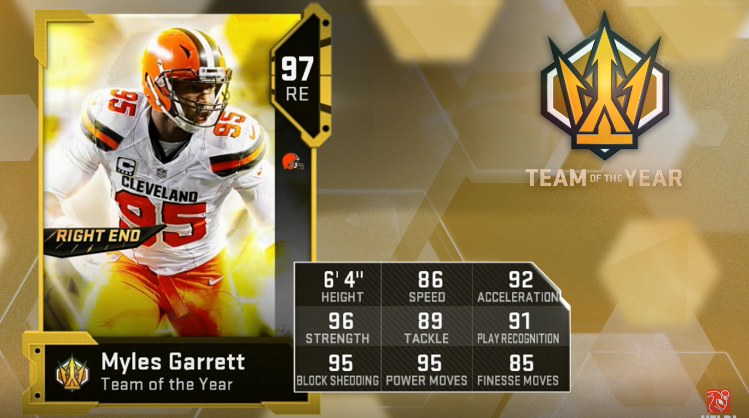 Myles Garrett isn’t the same level of pass rusher as Jones, but he comes with significant more fan fair which likely elicits the 97 overall item.

Without a Power-Up option until this release, Garrett is expected to be one of the most sought after defensive cards in the game, and at this point is arguably the best right end in the game at the moment. 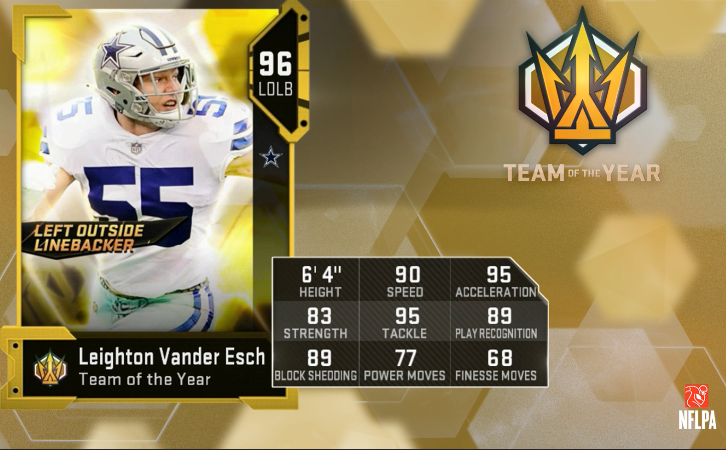 Rookie Premiere owners will be happy to see another jump in their item, but Vander Esch just got a 93 overall item for the Playoffs program which released a week ago. It’s a head-scratching decision given the plethora of potential linebackers in need of an upgrade, but it’s made doubly worse given Leonard is one of the front runners for Rookie of the Year and therefore in line to receive another upgrade as a result.

Given the litany of potential outside linebackers to choose from, it’s difficult to say EA chose right on either direction should they stick their formula from past Maddens 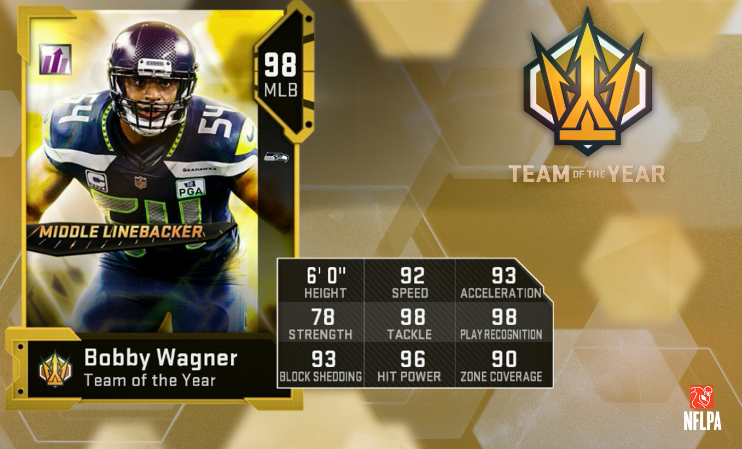 It’s nice to see Wagner – easily the best middle linebacker in the NFL during the 2018 season, get a non-LTD item, and one that arguably makes him the best card to be released from this promo.

But to do so alongside Joe Schobert, a middle linebacker EA generously termed “Sub Package Linebacker” to shoehorn into the program, is blatantly disrespectful. 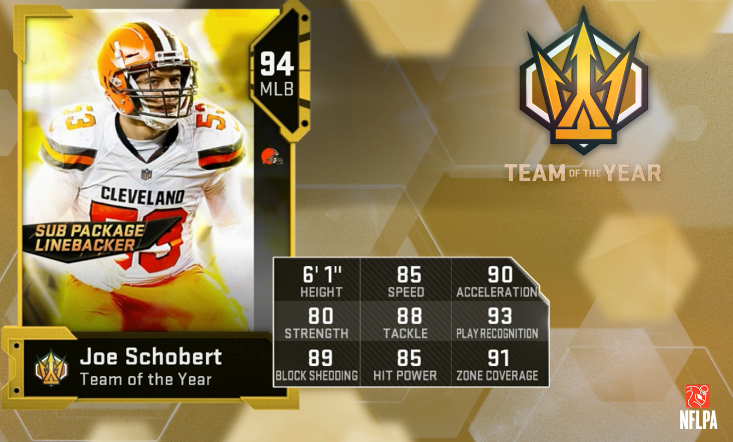 With 103 tackles on the season, Schobert ranked 35th among active players in the pivotal stat, falling far behind the likes of Blake Martinez (144 tackles) and Anthony Hitchens (135 tackles,) both of which are mind-numbingly more deserving of a 94 overall item.

While a homage to Browns’ super fan and Madden Ultimate Team social media manager Mike “MUT Guru” McFadden might seem cute to EA, the inclusion of Schobert is a dreadful oversight on an otherwise solid enough card reveal, and will likely go down as one of the worst individual promo card decisions to date.

Madden 19 Team of the Year – Defense