PS4, Xbox One and PC users certainly can’t complain about the March 1 edition of content, however, as all six of the 97 overall items either are unique, or downright destructive, in the current meta.

While Byron Jones is the clear standout from this bunch, the rest of the new upgrades are no slouches. 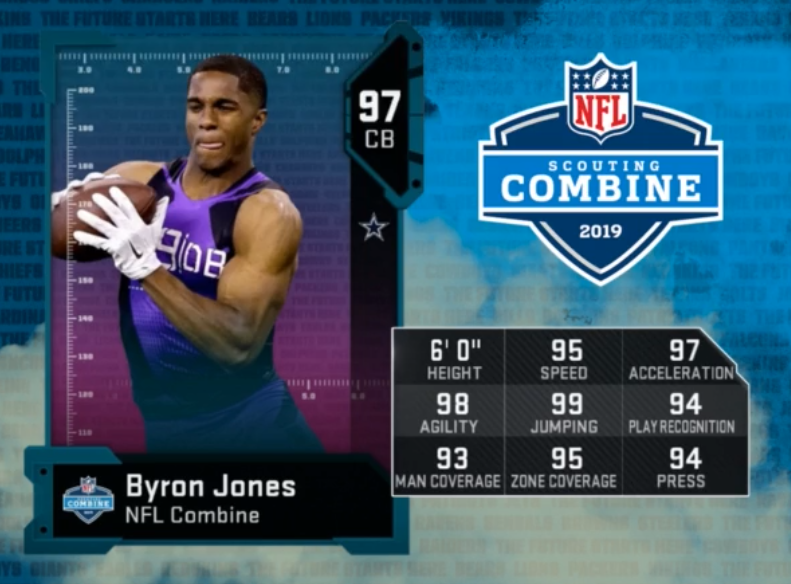 Byron Jones is the runaway favorite of the latest Madden Ultimate Team drop.

Let’s start first with the pièce de résistance, Cowboys cornerback Byron Jones. Jones set a world record at the 2015 NFL Scouting Combine for the standing broad jump (12-feet, 3-inches) and promptly shot up draft boards as a result, ultimately earning a first-round selection by the Cowboys to play free safety.

While the lanky player ultimately ended up finding success at cornerback, his MUT card will undoubtedly be one of the best items at either position, as a well-deserved 99 Jumping will mix well with 95 Speed and excellent coverage stats.

At least at this point in the NFL Combine promo, Jones is easily the best card released, and arguably could be an end-game item without any sort of extra boosts, which is nice considered Jones doesn’t have a Power-Up card at this point. 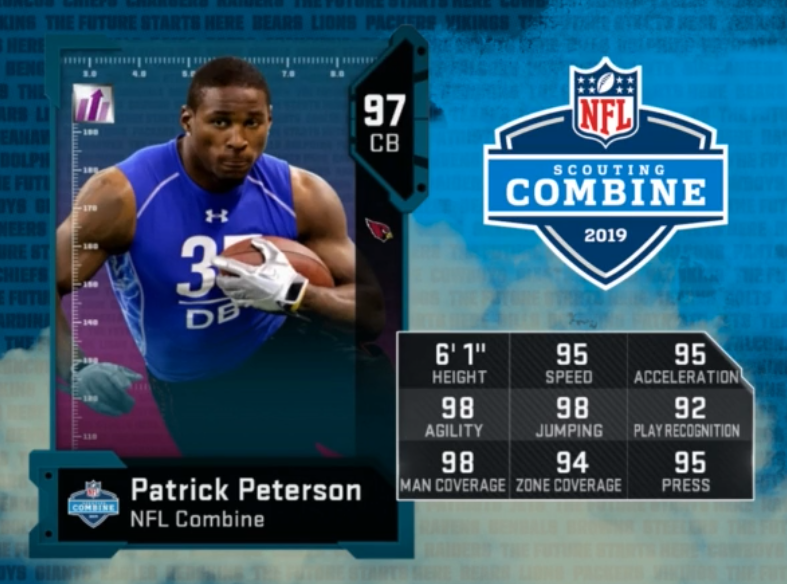 Peterson may not be as great as Jones, but he’s nothing to scoff at.

Except, you could the same exact thing for Patrick Peterson, who trades one less jump and two less acceleration for +5 Man Coverage, and only a small drop in Zone Coverage.

It’s probably splitting hairs, but Jones does sport +11 Tackling and +8 Blockshed, which is important particularly since the latest EA Title Patch has unintentionally made running even more overpowered than before.

Peterson does have a Power-Up, however, so those who were savvy enough to invest in the Cardinals cornerback prior to Friday will likely have a slightly better item and one that should be able to cover up some of the notable weaknesses, if only for a week or two. 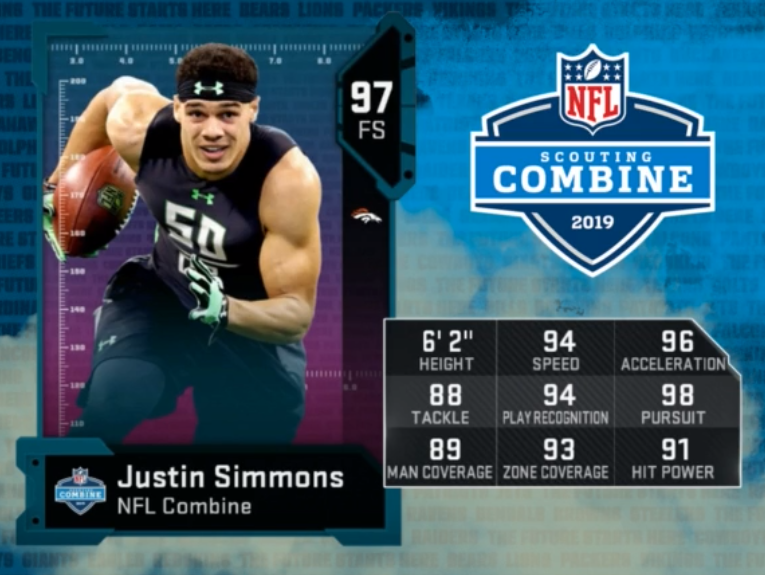 Simmons simply can’t match the stature of the other players added on March 1.

The safeties weren’t quite as interesting as the cornerbacks, but it’s still nice to see some different names included into the 97 overall mix.

Justin Simmons just got a 92 overall Team Builders item a whopping two long weeks ago, so suffice to say that item will likely double in price with an impending Power-Up making the third-year safety significantly more valuable, but this iteration will certainly do for Broncos theme teams until then.

94 Speed, 93 Zone Coverage and 91 Hit Power are all respectable figures for a player that isn’t exactly considered a household name, and the inevitable Power-Up will help Simmons case as a do-it-all safety in the near future. 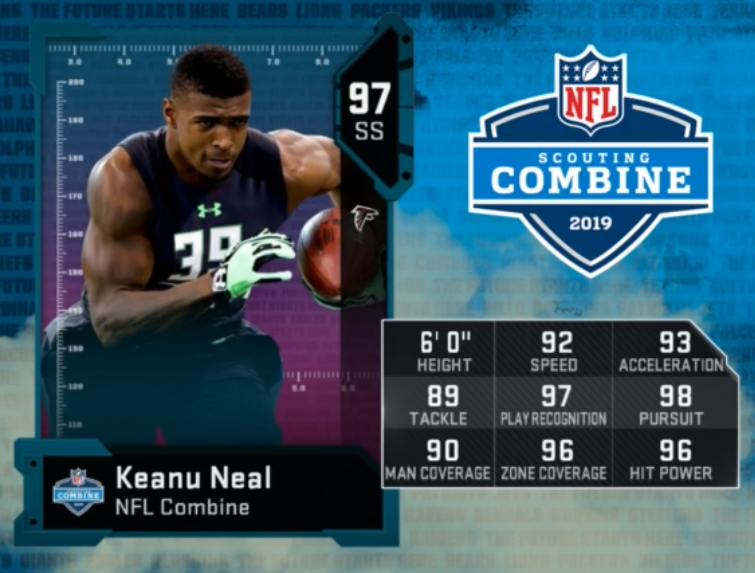 Anyone looking to utilize Neal will certainly be hoping for a Power-Up down the line.

Keanu Neal is likely the least interesting player of the quartet, but even then, a Power-Up will fix his disappointing 92 Speed.

Known as one of the hardest-hitting safeties currently in the NFL, 96 Hit Power could probably be a little higher, but without any way to measure such a thing at the NFL Scouting Combine, it’s difficult to use this program as a means to showcase his best attribute. 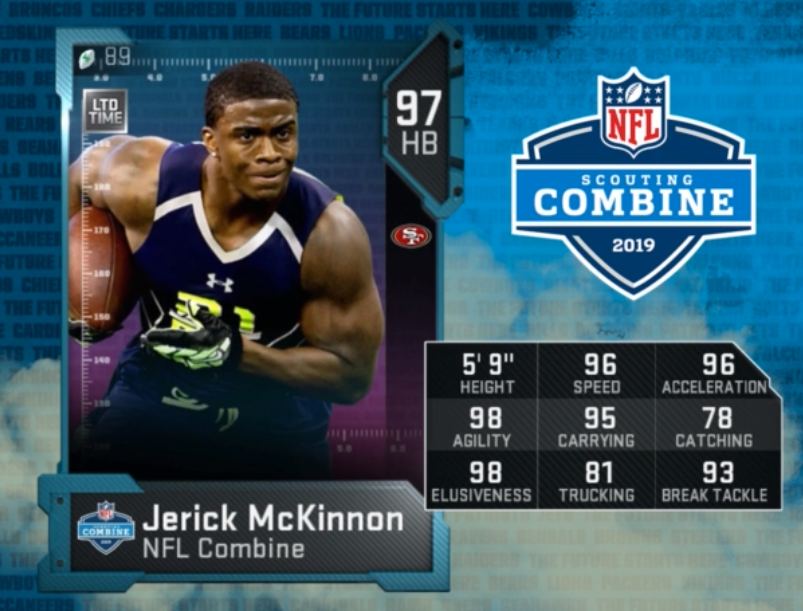 McKinnon seems to be lacking a solid place in the current Madden Ultimate Team meta.

Jerick McKinnon is certainly the more exciting of the two LTD items released Friday, but it’s difficult to understand his place in the current meta given he’s essentially a worse version of the 97 overall Scouting Combine Christian McCaffrey, but guaranteed to be more expensive.

Similar to McCaffrey, McKinnon in real life is supposed to be a multi-dimensional running back, capable of taking a part a defense running or catching the ball.

Instead, McKinnon’s receiving stats leave a lot to be desired, and frankly, pale in comparison to McCaffrey to the point where even 49ers or Vikings theme teams might consider avoiding the 2014 third-round pick in lieu of cheaper options. 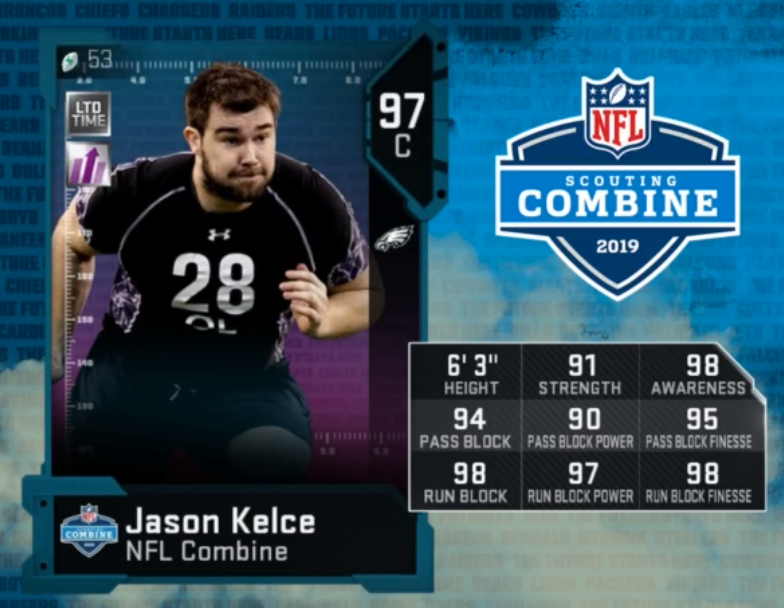 Kelce rounds out the latest drop as one of the worst LTD releases to date.

It’s March, so any offensive lineman released at this point in the Madden Ultimate season will be good, LTD item or not.

That’s really all the analysis that needs to be given for Jason Kelce, who figures to be one of the worst limited time items released, just due to his position, as part of the NFL Scouting Combine promo.