December 18 will see the latest installment of Team of the Week, a featured program based on the in-game performance of players throughout Week 15 of the NFL season. A total of 15 new cards will be released around 2:00 PM EST, including four cards over 92 overall, one of which will take over the usual LTD (limited time) option.

First up, Marlon Mack becomes the third Colts player to receive high-end Team of the Week honors in Madden 19, joining Darius Leonard (Week 8 Boss) and T.Y. Hilton (Week 11 Boss) in the aforementioned category thanks to a 27-carry, 139-yard effort in which he also scored two touchdowns.

His 92 overall card is an improvement over the 87 overall Football Outsiders edition which was released in October, but the stats are frankly underwhelming given the variety of other running backs released in the past couple of weeks. As a result, Mack is really only suitable for Colts themed teams. 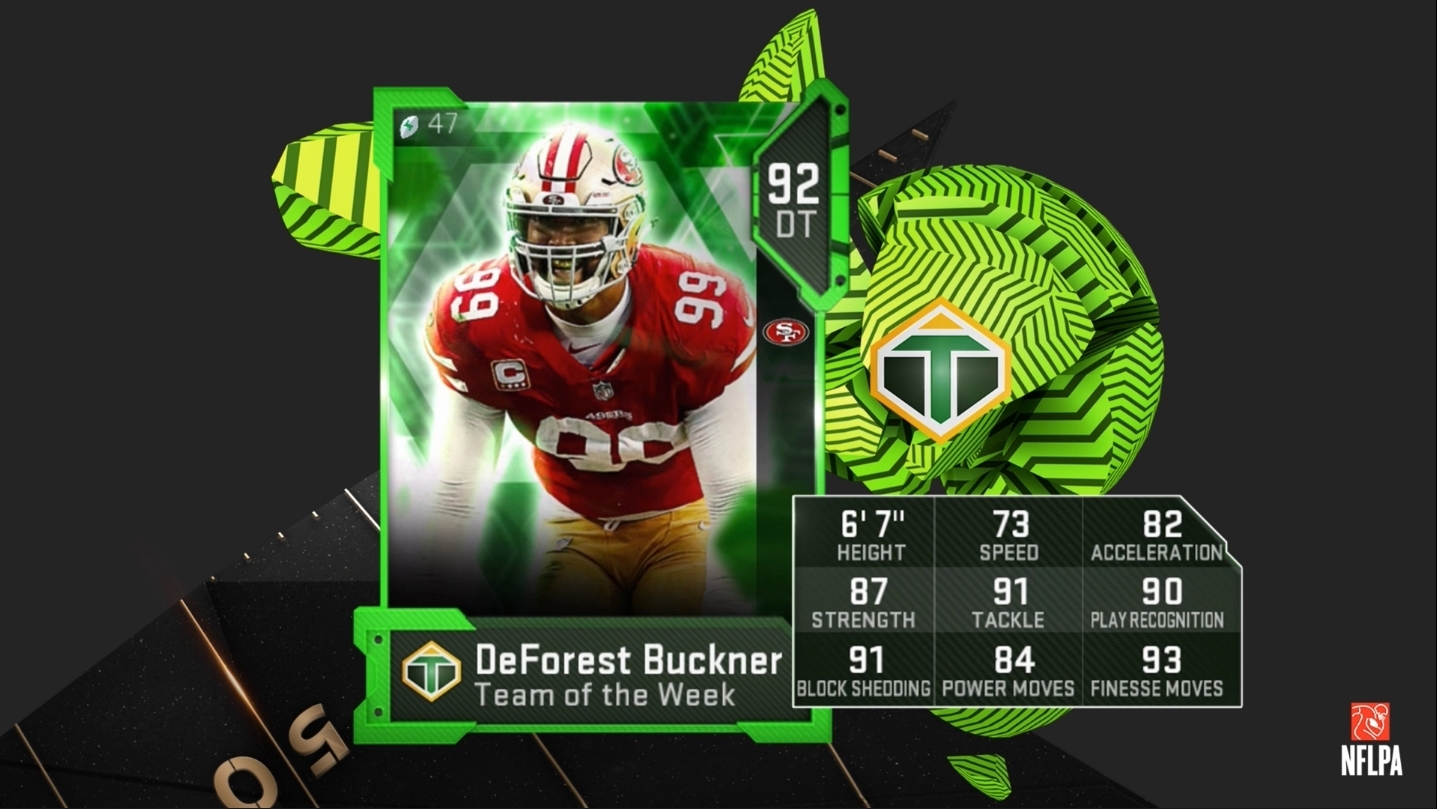 DeForest Buckner is the second consecutive 49ers player to earn a Team of the Week 90+ overall card, following tight end George Kittle from Week 14. Buckner’s seven-tackle, two-sack effort against the Seahawks was enough to garner the honor and is a notable improvement upon his 86 overall Ultimate Kickoff card which came out in September.

Compared to Mack, Buckner might present a solid alternative for people interested in acquiring a cheaper high-end defensive tackle thanks to the lack of alternative options at the position. 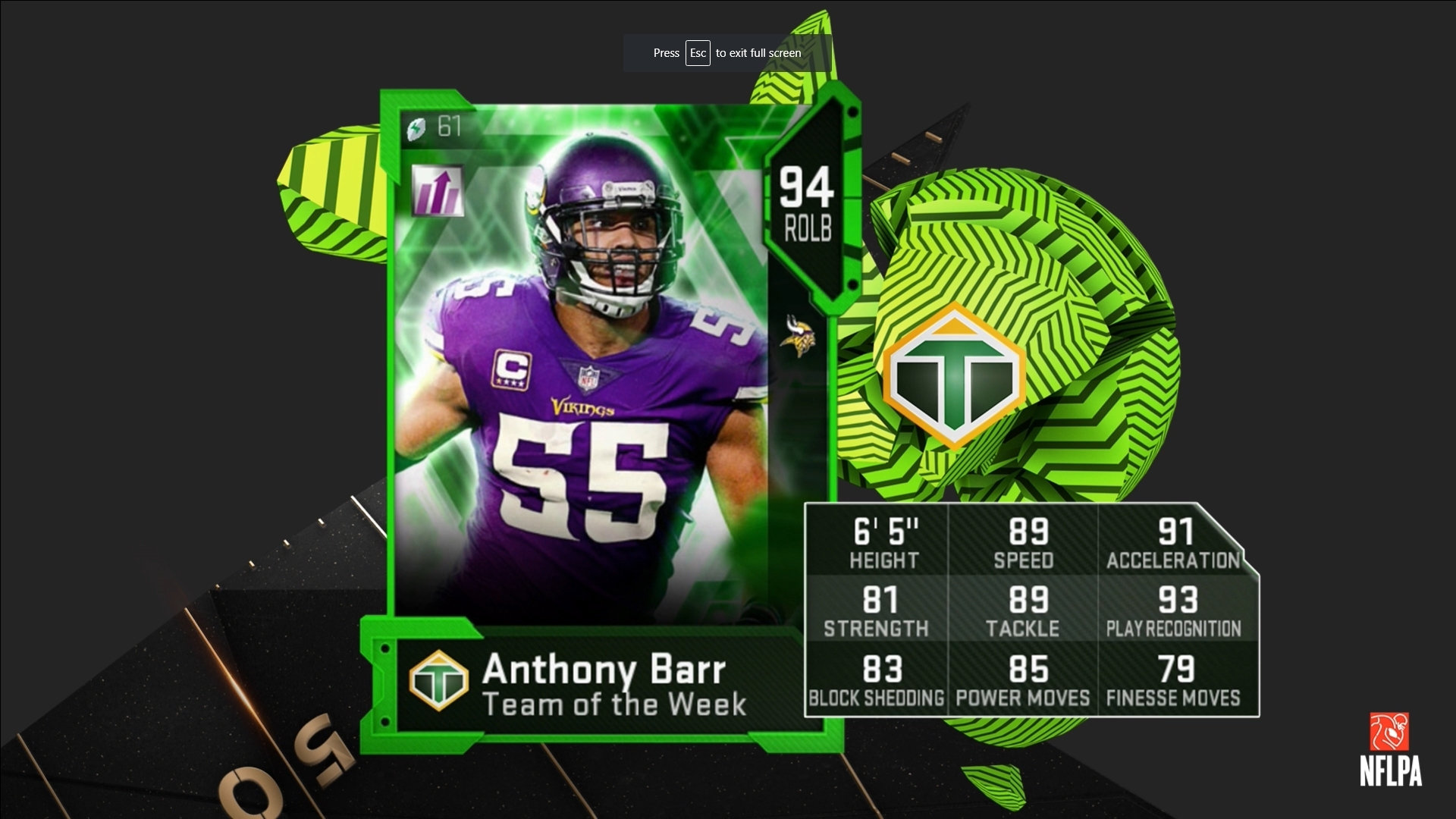 94 overall Anthony Barr joins the fray as the Week 15 Team of the Week Hero, meaning prospective players hoping to acquire the right outside linebacker for their team will either need to buy it from the auction house or complete the “TOTW Boss” set by using Buckner and Mack.

Due to an excellent blend of size and speed, Barr has been a foundational element to Madden Ultimate Team since his rookie season – so much so that he received an Out of Position card at strong safety just two weeks ago.

While that card won’t receive an upgrade via the Power-Up formula, Barr’s 90 overall Most Feared card will, making the Vikings linebacker simultaneously one of the best, and most affordable, options at ROLB. 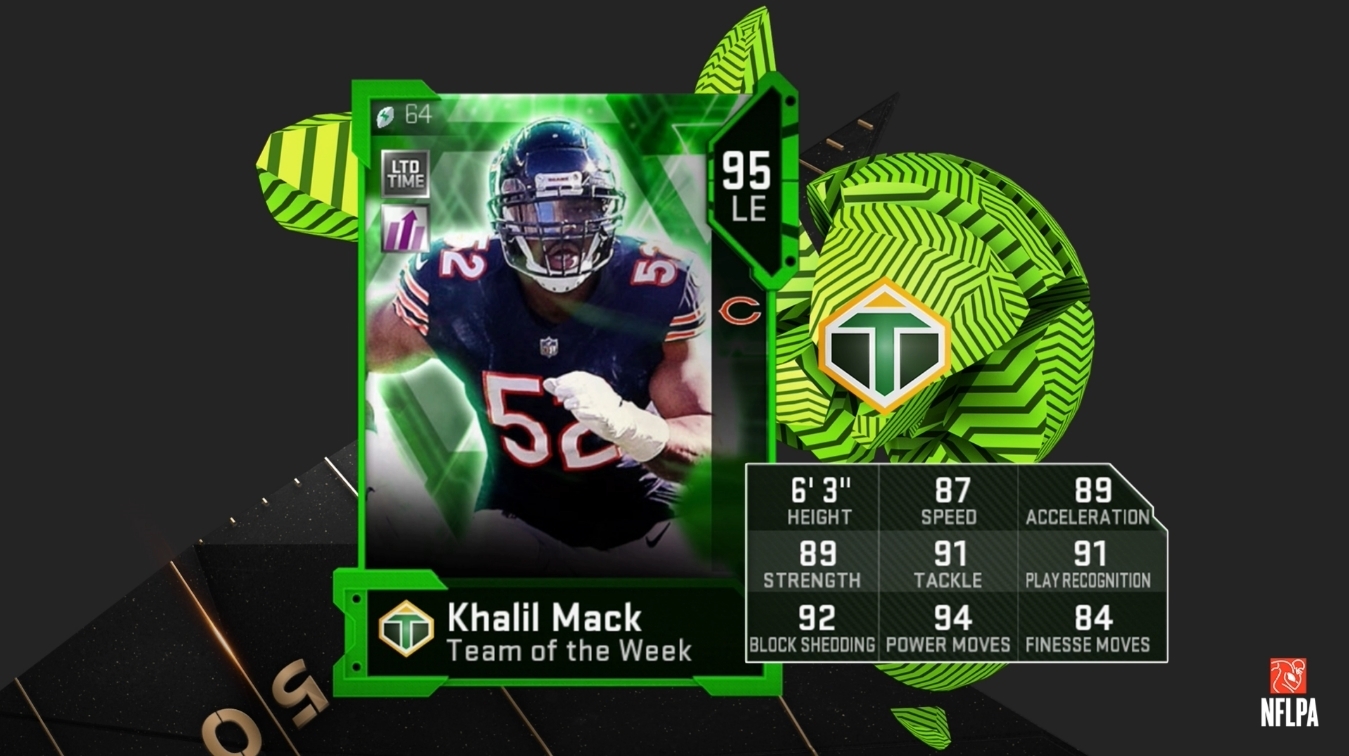 Khalil Mack rounds out the additions this week, becoming the fourth Bears TOTW Hero or LTD released this season and the second left end, joining 92 overall Akiem Hicks from Week 11.

Already sitting on a 92 overall Most Feared card, Mack joins Barr as the two players to receive an upgrade to their Halloween versions, but unlike his NFC North counterpart, Mack figures to be incredibly expensive due to the high-priced nature of his two recent upgrades.

December has been an excellent month for Chicago theme teams, as the Bears have received a total of four players with 95 overall cards and more could be on the way with the holiday season still in full swing.

EA’s blog did note that TOTW will take a one-week hiatus due to the holidays, combining together during Week 17 to round out the multi-week promo.