Madden 19 has been making headlines for all the wrong reasons this week, but another round of Team MVPs for Ultimate Team on PS4, Xbox One, and PC should help change the narrative.

March 8 saw the release of 10 new Team MVPs, adding a respective defensive or offensive 97 overall player for users on all platforms to play with.

It’s not 100 percent clear how or why the 10 teams were chosen, but it seems likely more will be announced Monday, March 11 during the special Madden Daily Drops stream. 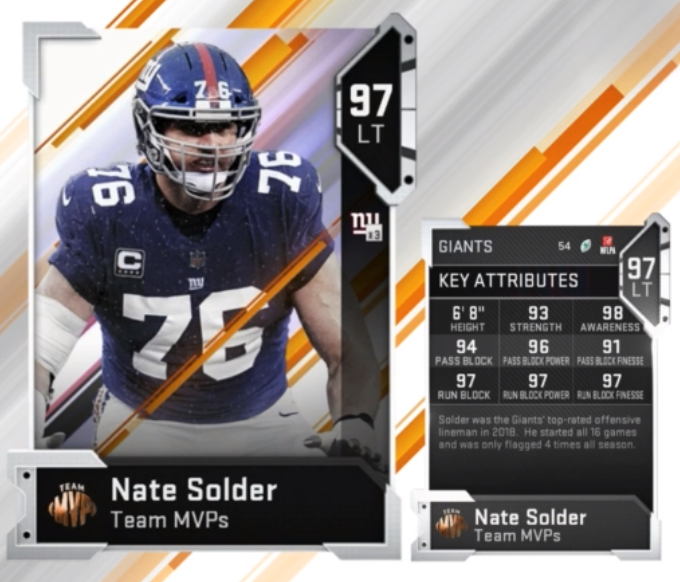 Nate Solder is just one of many new additions that come with the latest Madden Ultimate Team drop.

It certainly feels like there are better items to come, as the majority of the 10 new Team MVP players released today are simply not exciting.

That doesn’t mean they aren’t solid iterations, however, with a bevy of strong offensive and defensive lineman entering the fray including Nate Solder, who received his first upgrade of the entire Madden Ultimate Team season Friday. 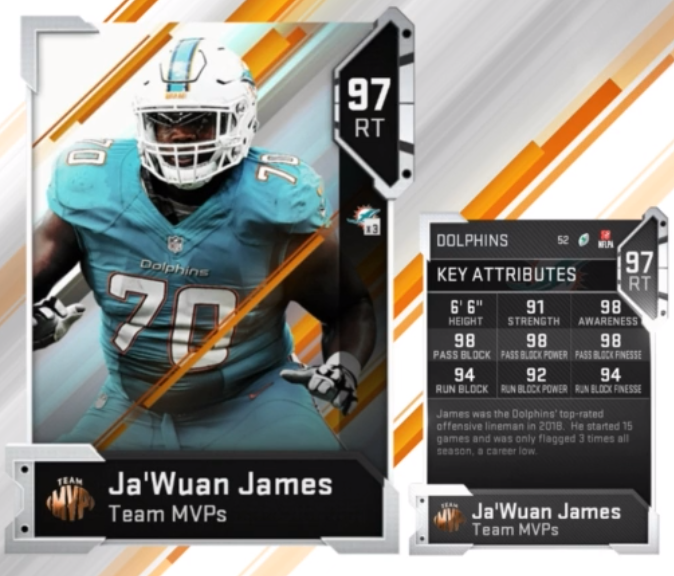 James’ future team in the NFL might be up in the air, but this new option is great for any players looking for an upgrade.

The same thing could be said for Dolphins right tackle Ja’Wuan James, who saw a massive boost from his 82 overall Ultimate Kickoff cards.

There was some concern that this second batch of Team MVPs might be a little difficult to shoehorn together, given such teams like the Dolphins and Bills didn’t have many offensive players truly worth of the 97 overall item.

Given at least two members of this current crop of items are either expected to leave their previous team via free agency this offseason, or have already left, it’s fair to say EA was more content providing well-rounded options to current theme teams as opposed to projecting for the future. 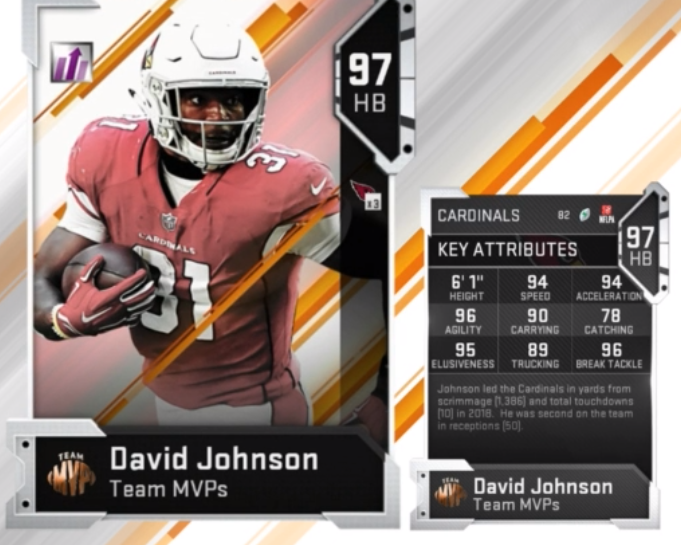 One of most impactful running backs of the last few years didn’t get too much love with this latest release.

One of what is expected to be three running backs revealed for the second slate of Team MVPs, David Johnson was a part of the initial tease showcased on Thursday.

With the bevy of running backs already in the game, and seemingly released on a day-to-day basis, it’s a bit surprising that this version of Johnson really does nothing to separate himself from many of the other top options available.

Cardinals theme teams will surely be happy, but for a running back that in Madden 17 literally got new updates every promo, this version sure seems to fall a little flat. 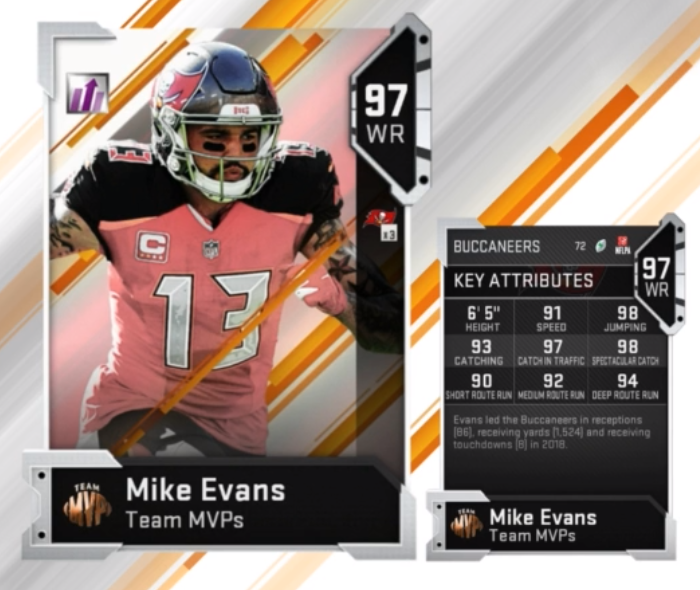 Mike Evans is another star that didn’t get an MUT card to match his real-life performance.

Mike Evans was the other card teased Thursday, which was a good reminder the Pro Bowl receiver who tallied over 1,500 receiving yards and eight touchdowns in 2018 hadn’t had a better item since his 91 overall Primetime Performer released in mid-September.

Evans’ items will never be blessed with speed, but generally the run-blocking more than makes up for it, but it’s hard to argue that’s the case this go-around.

At 70 Run Block and a smattering of other mid-50 blocking statistics, it’s fair to argue that for a receiver so productive this season, this 97 overall item does not come close to living up to the real-life counterpart. 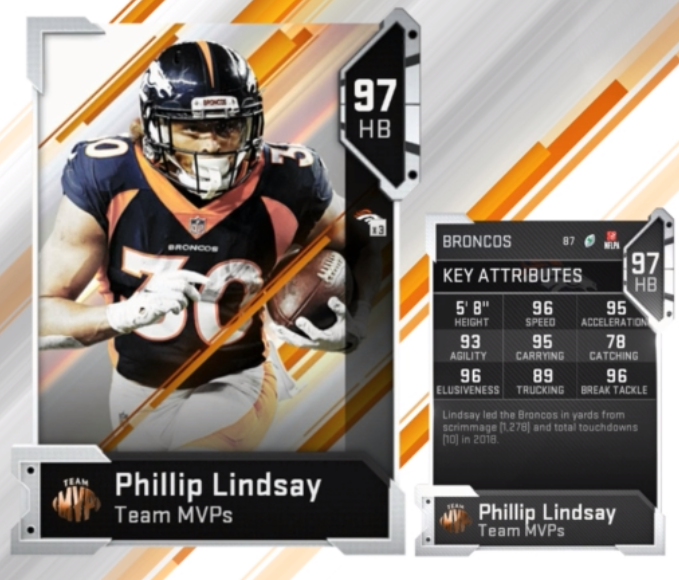 Lindsay got himself a well-deserved MVP release with the latest MUT drop.

Phillip Lindsay becomes the second running back released Friday, and was arguably one of the most-deserving cards to receive a 97 overall item given his 90 overall Football Outsider dropped at the beginning of December didn’t come close to aligning with his 2018-19 season production.

At 96 speed, Lindsay will be a menace regardless if he fits in with a Broncos theme team, but more importantly this essentially confirms the undrafted rookie will receive a Power-Up, perhaps as early as this weekend, which should aid those who have held onto his previous four iterations of cards. 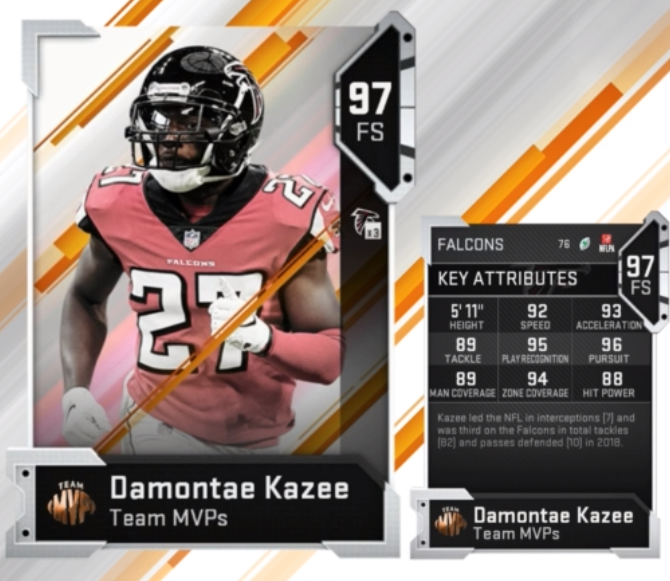 Kazee’s newest MVP item likely precludes a Power-Up to come in the near future.

Damontae Kazee also falls into that much-needed Power-Up discussion, as the Falcons free safety had four previous upgrades en route to tying for the league lead in interceptions.

92 Speed and 94 Zone Coverage are probably a little bit disappointing considering his real-life numbers in 2018-19, but high-80s catching stats likely mean that if Kazee gets his hands on a ball, he won’t drop it. 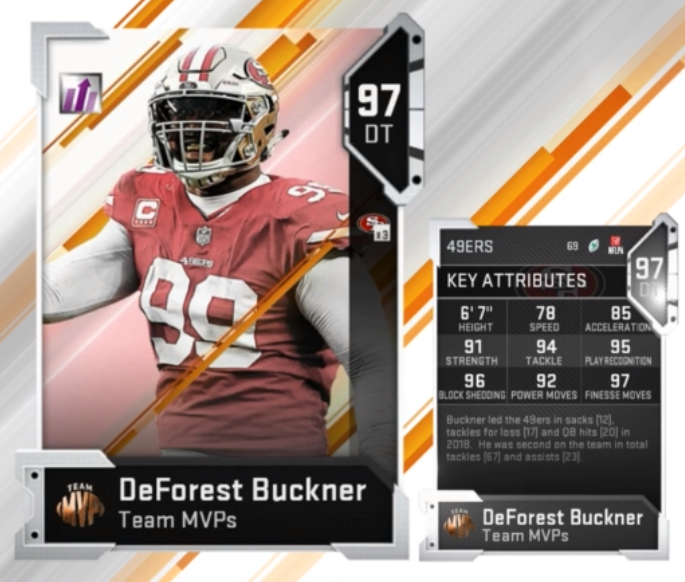 Buckner was one of the best upgrades with the latest drop.

DeForest Buckner rounds out the opening 10 Team MVPs and for good reason, as the Pro Bowl defensive tackle was one of the lone bright spots on an otherwise injury-plagued season for the 49ers.

Buckner likely still winds up being a DT 2 on a 49ers theme team given the likes of Bryant Young, but considering his previous item was a 92 overall, this was certainly due.

Here’s a rundown of the 10 new Team MVPs and the Power-Up teams they would fall under: