Twitch streamer Jonas ‘Sp4zie’ Ring was bewildered to lose against Fiora in League of Legends fans to a brand new digital strategy card game announced during the 10-year anniversary celebration for the MOBA on October 15.

Players who got access to the early build for the game have been rifling through all of LoR’s cards for the best combinations. But there are some cards that can single-handedly win a match without taking the opponent’s Nexus down to zero, and even worse, some that can prevent a loss by executing their win-condition. 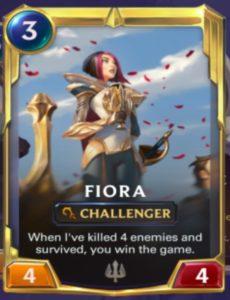 A max level Fiora can actually just end games by herself.
400

That’s something Sp4zie learned the hard way during his October 17 stream where a decisive late-game battle just barely escaped his grasp after his opponent’s Fiora had met the conditions for her Challenger ability.

“When I’ve killed 4 enemies and survived, you win the game,” her card reads.

Going into what would be the final round, Sp4zie was banking on having enough lethal damage to take out the enemy’s Nexus before Fiora could get her last kill.

But a reset to the order with Shen’s Stand United pulled a fast one on the streamer, since Fiora was now in a prime position to claim her final victim.

There was slight confusion as to which would supersede the other: taking the enemy’s Nexus down to -2, or would Fiora’s Challenger ability shut down the game?

Unfortunately, like many League of Legends players dealing with a late-game split-pushing Fiora know, the Grand Duelist always gets the last laugh.

Even though Sp4zie wasn’t “mad about” losing to the win-condition, he was wide-eyed with surprise after seeing the opponent’s last life points evaporate while still taking the loss.

Funnily enough, in LoR’s official Overview trailer, they highlight Fiora’s Challenger ability popping off before the announcer can be heard saying: “even break the rules and claim a new way to win.”

With LoR players only getting a few days of gameplay so far, there’s still a lot to learn about the mechanics for the many cards in the game’s catalog.