Legends of Runeterra is Riot Games’ take on the card game genre, incorporating the lore of League of Legends into cards.

The open beta of the game launched on January 24, with thousands of players quickly jumping in to craft decks, battle it out, and, of course, try to climb the ladder. With everyone starting from Iron and needing to slowly make their way up, it took some time for a player to reach the highest rank – but it finally happened, and PokrovacHS has revealed the decks he used to do so.

Legends of Runeterra is Riot Games’ take on the card game genre.

Surprisingly, the Czech used five different decks on his journey to Master. It’s incredibly impressive that he managed to play so many decks well enough to hit the highest rank, but that does show just how skillful he is. Here are all of his decks. 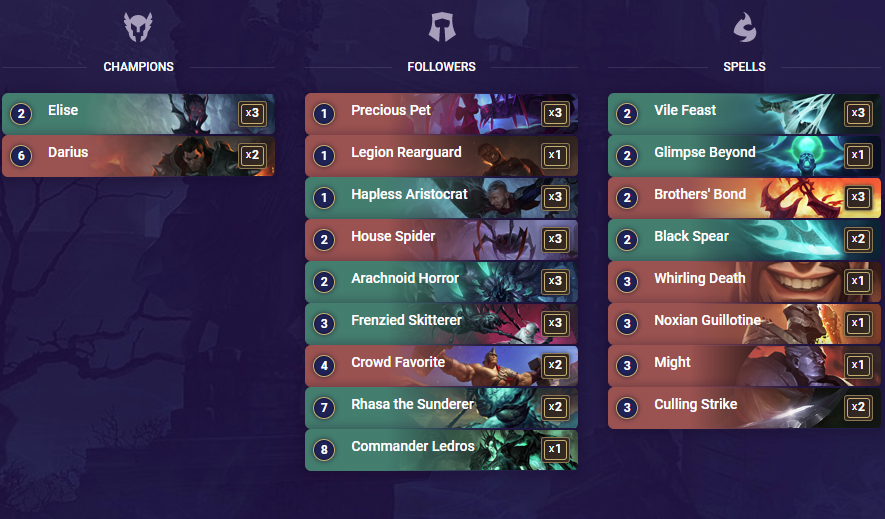 The Draven and Elise spider aggro deck focuses on being aggressive and taking down the opponent as fast as possible. There are lots of powerful early game followers to ensure you can get damage in, as well as great synergy with spiders in the early game.

There’s also quite a lot of mid and late game power thanks to Darius, Rhasa the Sunderer, and Commander Ledros – which allow you to deal huge chunks of damage and have solid board presence. 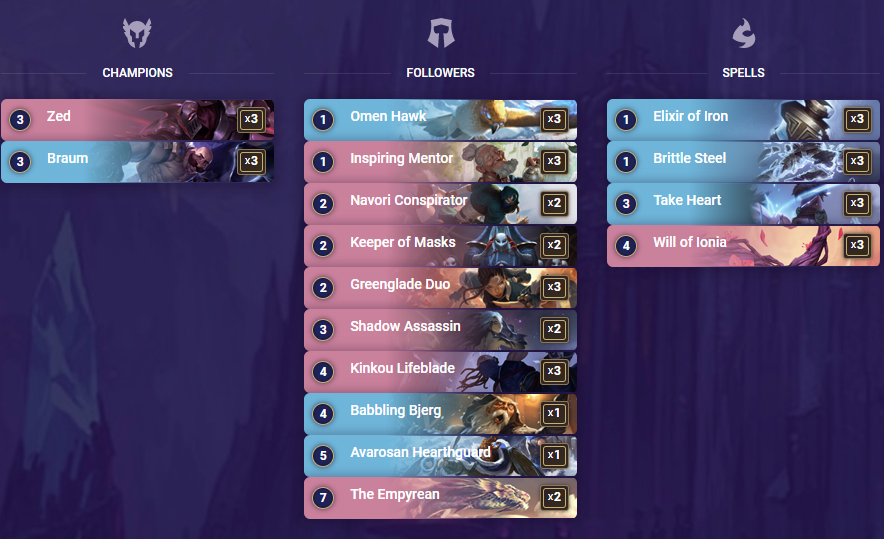 This deck is all about making use of Elusive units and Zed to take down your opponents in the mid-game while utilizing Braum and a few spells to control your opponent.

The aim of this deck is generally to buff up either Zed or your Elusive followers and then strike at your opponent’s undefended Nexus, as only other Elusive cards can block Elusive attacks, and not many decks have them. 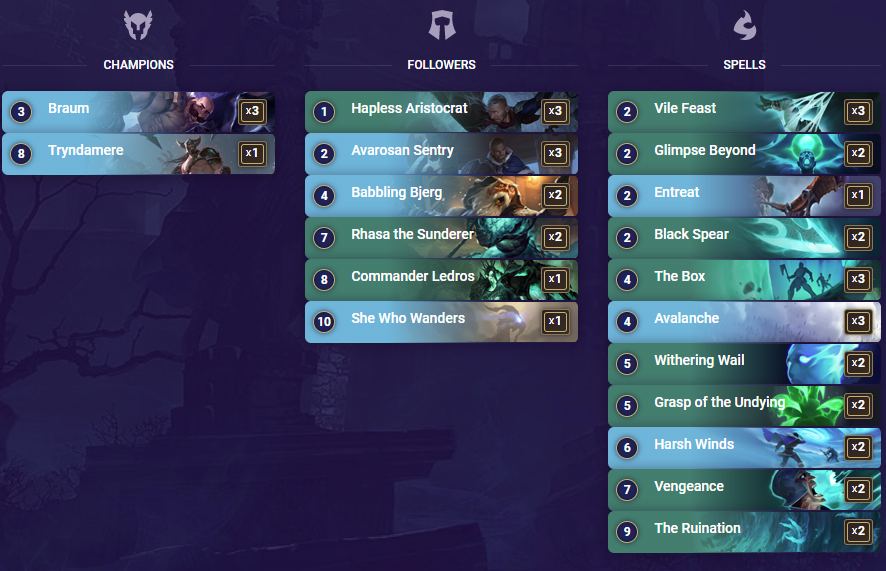 Braum and Tryndamere control is based on defense in the early game with Braum and your spells, before taking down your opponent with powerful late-game cards like Tryndamere and She Who Wanders.

Braum and multiple area of effect spells make surviving the early and mid-game easy, while even one of your late-game cards can win the game by itself. 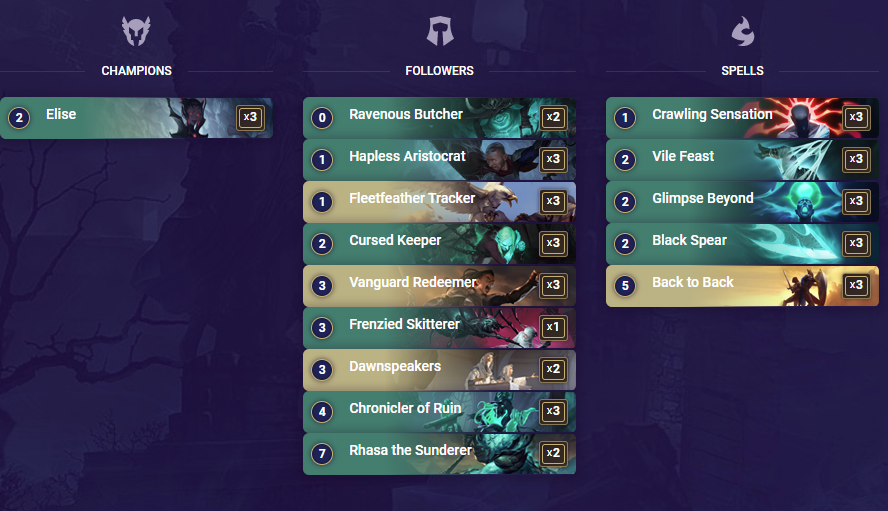 Dawnspiders is an interesting combo deck focused around Dawnspeakers and spider followers. The Dawnspeakers give allies +1/+1 at the end of each round if an ally died that round, while spiders are generally cheap and easy to mass, meaning they can be killed over and over for continuous buffs.

A successful Dawnspiders game will see a tonne of death, before overwhelming your opponent with a swarm of buffed up spiders. 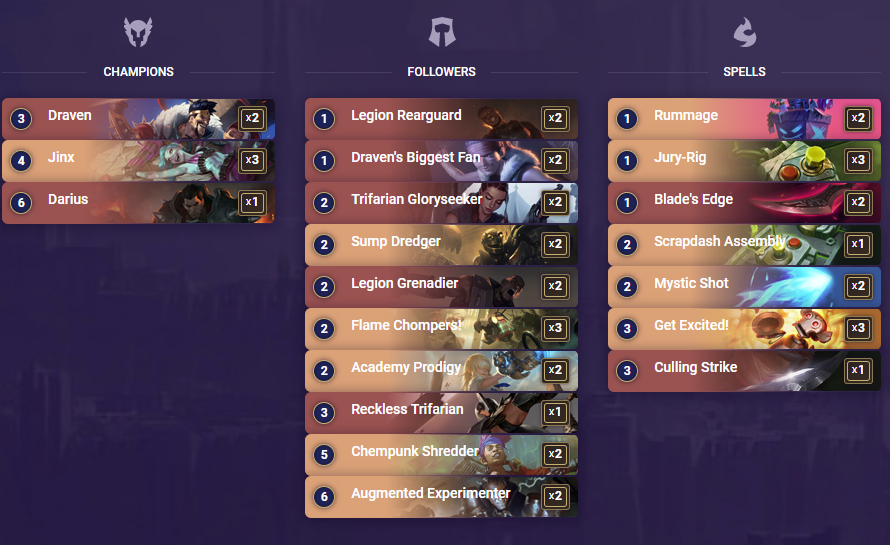 Last but not least is the Draven, Jinx, and Darius discard aggro deck. This is another interesting deck that differs from the norm. Many cards in this deck are aimed to be discarded, with even Jinx herself reaching full power when your hand is empty.

Generally, you will cycle through your hand quickly with this deck attempting to rush down your opponent with cheap cards, while re-gaining some cards thanks to Augmented Experimenter, which allows you to draw 3 cards in exchange for discarding your hand, which should be nearly empty most of the game anyway.

Master is the highest rank in Legends of Runeterra.

These decks don’t come as too much of a surprise as they are some of the most common ones, but PokrovacHS did highlight the Elise Darius spider aggro deck as “World first Master!”

So while he hasn’t revealed which deck he felt was the most powerful or which one he used the most, this may be a slight hint – and even if it isn’t, now we have a list of potentially the best five decks in the game. Time to get crafting and rank up.