Tyler1 is known on Twitch for his entertaining League of Legends gameplay and is often seen trash-talking some of his opponents regardless if he is winning or losing.

During his high-stakes Twitch Rivals match against some of the game’s top stars, including pro players such as 100 Thieves’ AnDa and Stunt, the popular streamer managed to secure the win and made sue the opposition knew all about it. 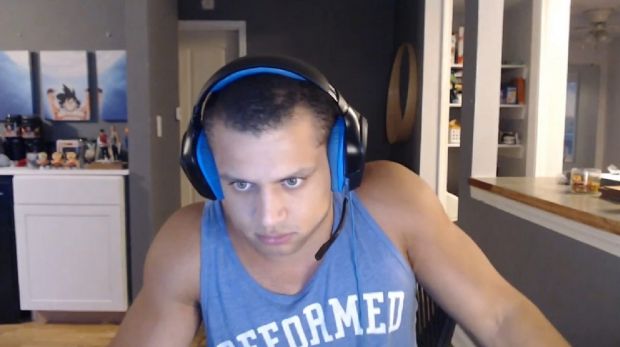 Tyler1 did not hold his trash talk back after winning his Twitch Rivals match.

The Twitch Rivals casters had just tuned in to Tyler1’s perspective of the match and, when he knew his team was likely to close out the game, he began to scream in excitement while hoping to hype his squad up.

“Kick their f**king asses, Shadowdogs motherf**kers!” He shouted, screaming his team’s name before typing to the game’s All Chat to rub it in some more, “Sit the f**k down.”

The Twitch star followed up by playing the iconic “who let the dogs out” song, referencing his team’s name, and started dancing in celebration of their impressive victory.

“Who let me out?” Steinkamp asked, hilariously taking credit for leading his team to victory, “jeez guys you’re welcome for the f**king carry.”

Tyler1’s passionate reaction was not surprising, as the end of 2019 Twitch Rivals tournament has a lot to play for, with a notable prize pool of $75,000 for the 3-day online event.

The League of Legends streamer’s “Shadowdogs Unleashed” squad has managed to top their group after the first day of competition with an impressive 3-0 record going into the playoff stage.

It is possible that Tyler1 could face off against 100 Thieves creator Yassuo’s squad in bracket play and will likely be looking for revenge after the pair had a hilarious grappling match during their last Twitch Rivals clash.

If he does manage to make an appearance in the grand finals of the online event, viewers will likely get to witness a trash-talking clinic from the popular streamer as he often tries to get in his opponents’ heads with creative insults.