It was two years ago, in summer 2017, when I last interviewed Tore ‘Norskeren’ Hoel Eilertsen and Elias “Upset” Lipp. I met him and then-teammate Elias ‘Upset’ Lipp at the EU LCS Studio in Berlin immediately after the EU Challenger Series promotion between Schalke S04 Esports and Red Bulls.

Nearly 18-years-old, Norskeren beaming with excitement after a 3-1 win that set Schalke up for the Promotion tournament. He followed Upset’s lead for most of the interview, laughing on cue, but speaking confidently when it came to his own support matchups and blinding Alistar against Raymond ‘kaSing’ Tsang’s mage-heavy champion pool.

The skinny and lanky pair spoke  of how immature they had been as “just” 16-year-olds playing for Mousesports little over a year before.

“It was a kindergarten team,” Norskeren insisted. “Our jungler didn’t like that we were so childish sometimes.”

It’s now two years on from that victory, and I’m speaking to Norskeren after another success, this time a 2-0 opening day of the 2019 World Championship Play-Ins. Now sporting Splyce yellow instead of Schalke blue, the 19-year-old is tall and stocky, and has to look down to make eye contact with me as we stood at opposite ends of a black table.

More confident, his words came out less scattered, but some things don’t change – he still smiled as he answered every question, and his red hair still catches the light first before anything else.

He brought me up to date on what had happened since we last met. “I kind of knew that I would not get the spot [on the Schalke LCS roster], because I was quite sure that they were going to build the team around Upset. And I knew kind of he didn’t want to keep playing with me.” 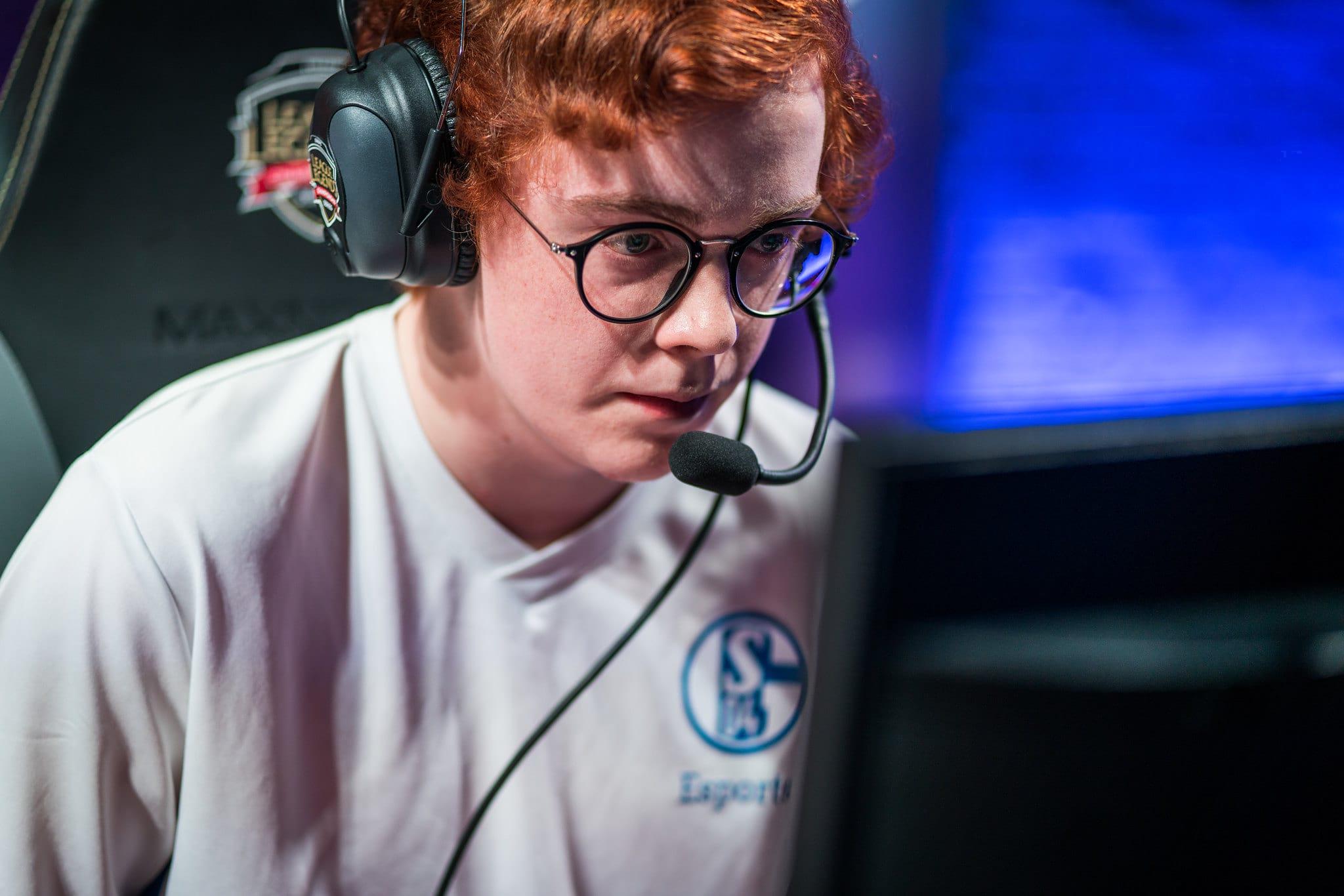 Norskeren at the 2018 Spring Promotion tournament to qualify for EU LCS.
[ad name=”article3″]

To get to Worlds this year, Norskeren had to beat former team with Upset on the opposite side of the rift. A fast 3-0, uncharacteristic of Norskeren’s new team, won Splyce their second-ever appearance at the World Championship, a feat Schalke have yet to achieve.

But Norskeren didn’t linger on what happened with Schalke – it made him more determined to continue in esports after he went back to school.

“I found out after two months that [school] isn’t so fun for me,” he said, laughing. “Yeah, I didn’t really enjoy it – it was too boring. I thought I should be playing in LCS.”

Norskeren’s qualification for 2018 EU LCS with Schalke S04, only to have to look for a new team immediately after, was far from the first or last setback in his career. His CV includes month-long blips on EUCS and NACS hopeful teams, including Dream Team, who were hit with allegations of delayed payments to players in 2016.

Perhaps because it was the most recent, Norskeren had more disappointment in his voice when he brought up the recent offseason between 2018 and 2019. He and fellow ex-Schalke S04 jungler Jonas ‘Memento’ Elmarghichi shopped for teams together and found EU LCS Team ROCCAT for the 2018 season. When ROCCAT didn’t manage to make it into the LEC franchising for 2019, Norskeren found himself looking for a team again, but with decidedly fewer opportunities.

It seems that I will unfortunately not be playing in the LEC next split.

Currently exploring options from other leagues, still hungry and motivated

Playing in the LCS was the best thing to ever happen in my life, and I will make sure I'll work as hard as I can to return.

“I was really frustrated because I quit school for only one year,” Norskeren said. “I felt like I was kind of betrayed. I felt like I didn’t play that bad [on ROCCAT].”

Indeed, though Team ROCCAT didn’t perform that well, Norskeren and Memento were the best performers on the roster. They became reliant on peel and protection picks from Norskeren like Braum or Tahm Kench to keep bot laner Martin ‘HeaQ’ Kordmaa safe from engage and – at times – his own awkward positioning.

The Splyce offer came in the final hour as something of a lifeline. After a very abrupt interview and tryout process because, as it turned out, almost every LEC team in the offseason assumed Norskeren would already be contracted elsewhere, the young Norwegian found himself back competing in the Berlin studios for the newly-franchised European league.

Norskeren’s time on Splyce became much more about developing as a professional gamer than the years in which he competed beforehand. He spoke about treating scrims like stage games to avoid letting his teammates down and having the confidence to perform even when scrims don’t go well. Much of Norskeren’s humility mirrored a sentiment from fellow World Championship attendee Jo ‘CoreJJ’ Yongin.

But Norskeren’s focus on improvement in-game isn’t just about mentality. He gave a lot of credit to Splyce’s massive player development staff.

It compares favourably with the situation at ROCCAT, where the team only had  Simon ‘fredy122’ Payne on their development staff. Norskeren admits that he listened to his fellow players – “I was kind of told by the Koreans what to do,” he said. Now he always receives individual attention from coaches on Splyce. 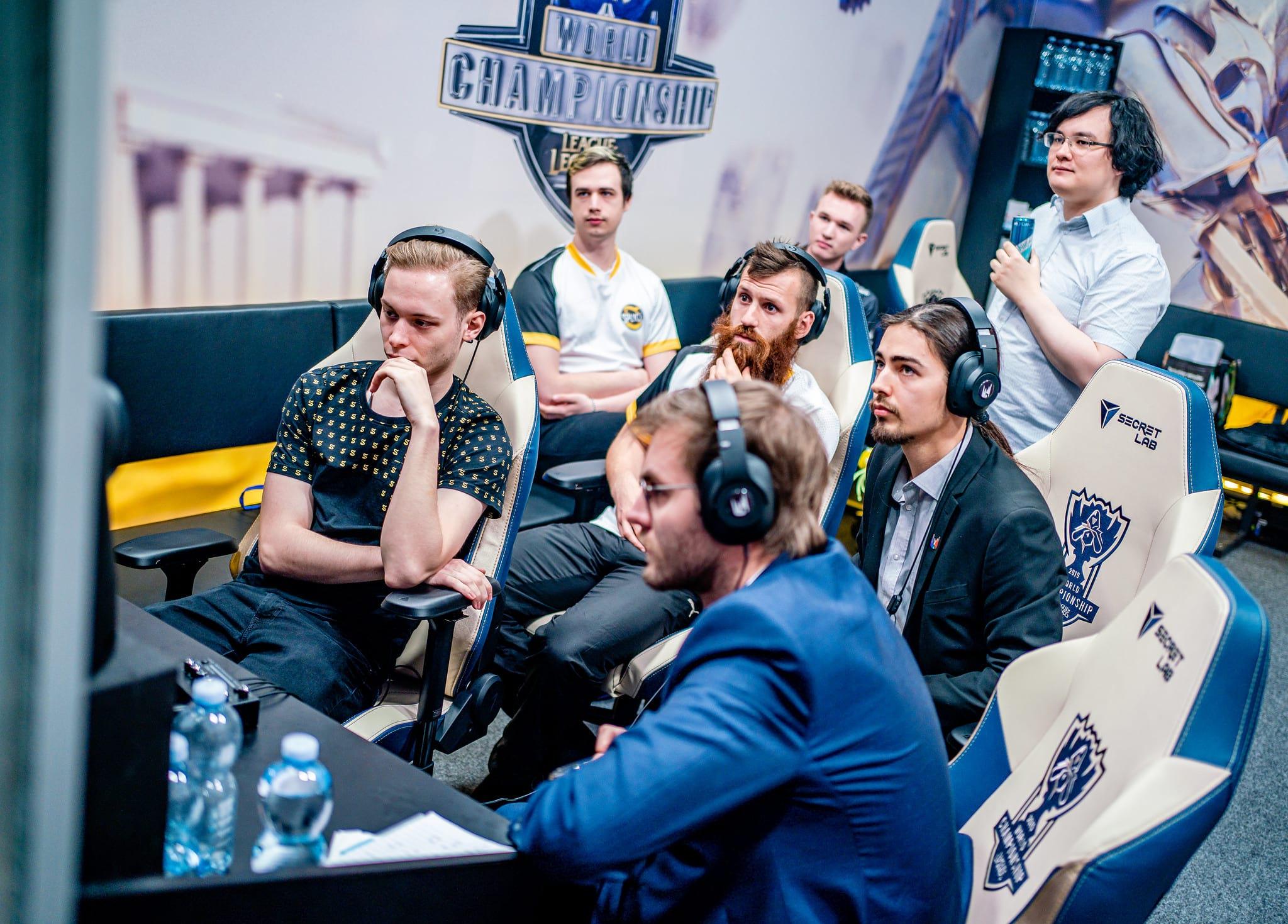 “Duke is really straightforward,” Norskeren said about figurehead of the Splyce coaching staff. “He’s kind of like a father. He gets mad if you play bad, but he’s proud if you played well… It shows that he cares a lot, and that makes me want to try even harder.”

Splyce have a somewhat unusual roster in that two of their more veteran players are top lane and AD carry. The core roles of jungle and support are younger in Andrei ‘Xerxe’ Dragomir and Norskeren. Between Head of Player Development James ‘Mac’ MacCormack and bottom lane coach Jensen Goh, Norskeren learned a lot about setting up plans in advance in conjunction with his jungler.

“That’s what’s helped me the most,” Norskeren admitted. “I’ve had some people who are kind of guiding me through it and being behind me looking at every game and telling me every single mistake.”

Beyond just Splyce coaches, Norskeren still has friends from Team ROCCAT and spoke fondly of his time in 2018 and how it contributed to his development in other ways.

“Even though we didn’t do well I had a good time,” he reflected. “I got some really good friends from it. I still talk with Memento and Profit really often, and we meet all the time in Berlin. It was a good year to grow. I feel like I didn’t grow that much as a player, but more as a person.”

His friends from ROCCAT no doubt serve as part of a support system along with the Splyce coaching staff. Norskeren also takes how the year ended as motivation to push himself even further in the game. 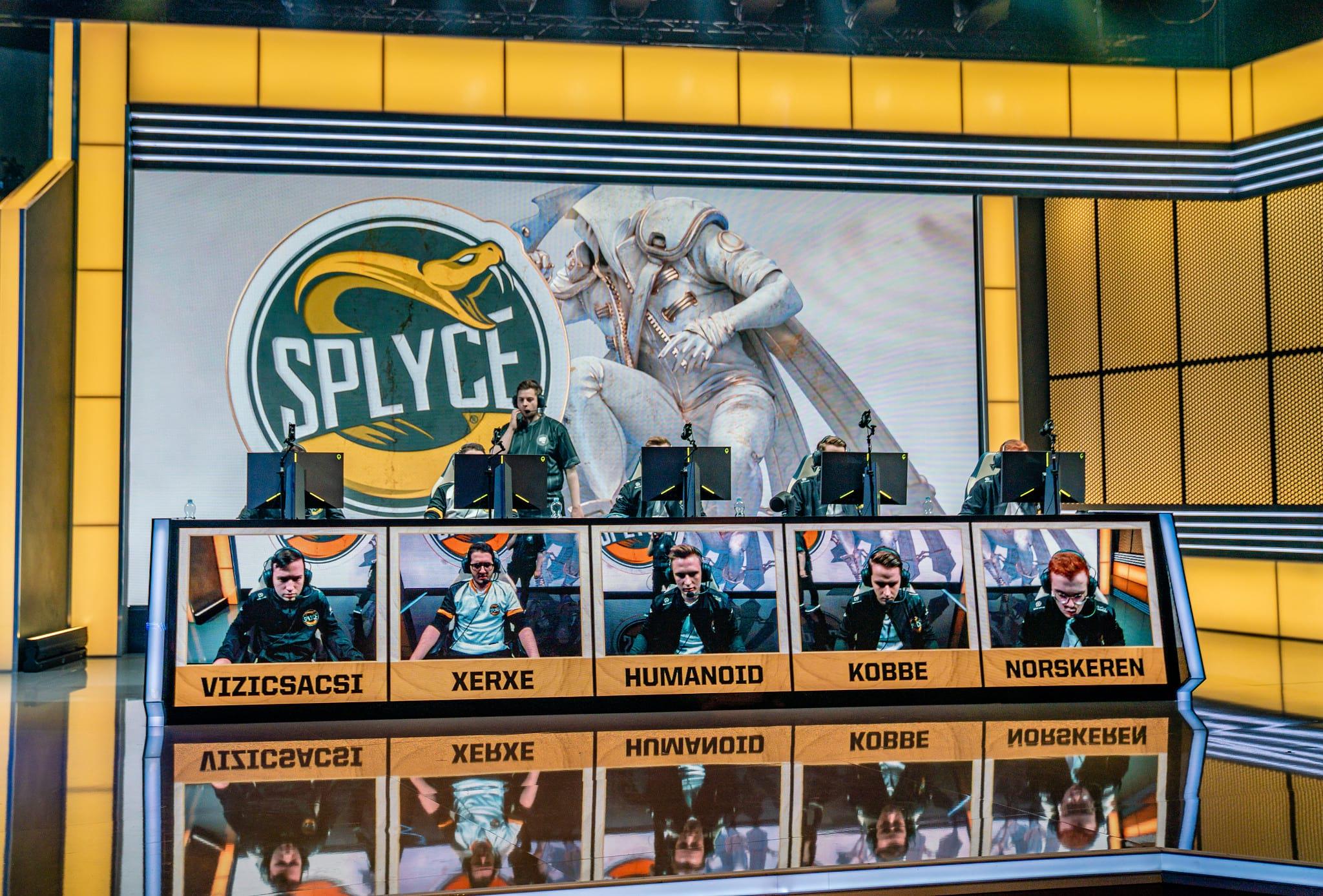 “I’ve been working harder than at least last year to try to make sure they feel like they made the right choice,” Norskeren said. “I don’t want to have the feeling again that I don’t know what I’m going to do next year because it really sucked.”

For any successful esports athlete, that feeling of not knowing what comes next is incredibly relatable. It’s easy to dwell on failure, but despite setbacks in Challenger Series and having to look for new EU LCS or LEC teams two years running, Norskeren’s only spoke at length when he got to talk about the people who helped him forward.

I remember him having those qualities even on Schalke when I first met him in 2017, complimenting Upset’s knowledge and how his teammate helped him learn more, even if he may have already suspected that a team with Upset wouldn’t include him in the following year.

That quality seemed even more pronounced in 2019 . Norskeren volunteered in detail how each member of Splyce’s staff helped him in different ways or the fact that he felt strongly that every member of his team could carry a game without having to be asked about it.

Of course, it’s easy to stay positive and look forward after a 2-0 day at the World Championship.

Throughout the day, Norskeren and bot lane companion Kasper ‘Kobbe’ Kobberup overtook the 2v2s as Xayah and Rakan. Even in trades where Norskeren got caught, they managed to turn them with the likes of a Grand Entrance taking advantage of a Lucian Relentless Pursuit or Bladecaller locking up mispositioned targets.

With the exception of DAMWON Gaming’s top side, which proved strong opposition in scrims, Norskeren believes his team should have a “pretty easy time” in Play-In. Their ability to outplay even in the face of a mistake backs it up.

And though it is the World Championship, for Norskeren, that reality hasn’t quite sunk in yet. Before his first match, he walked out on the same LEC studio stage he has played in every matchday since the Schalke S04 Promotion matches in 2017.

Despite being home to one of the strongest regions, the LEC studio is the smallest of all the big four LCS, LCK, and LPL venues. And Norskeren has competed on it every Friday and Saturday of the regular season for two years in a row.

“I kind of felt that it was different in the first game we played against Detonation FocusMe,” Norskeren reflected. “But then in the second game, it was a normal LEC game.” 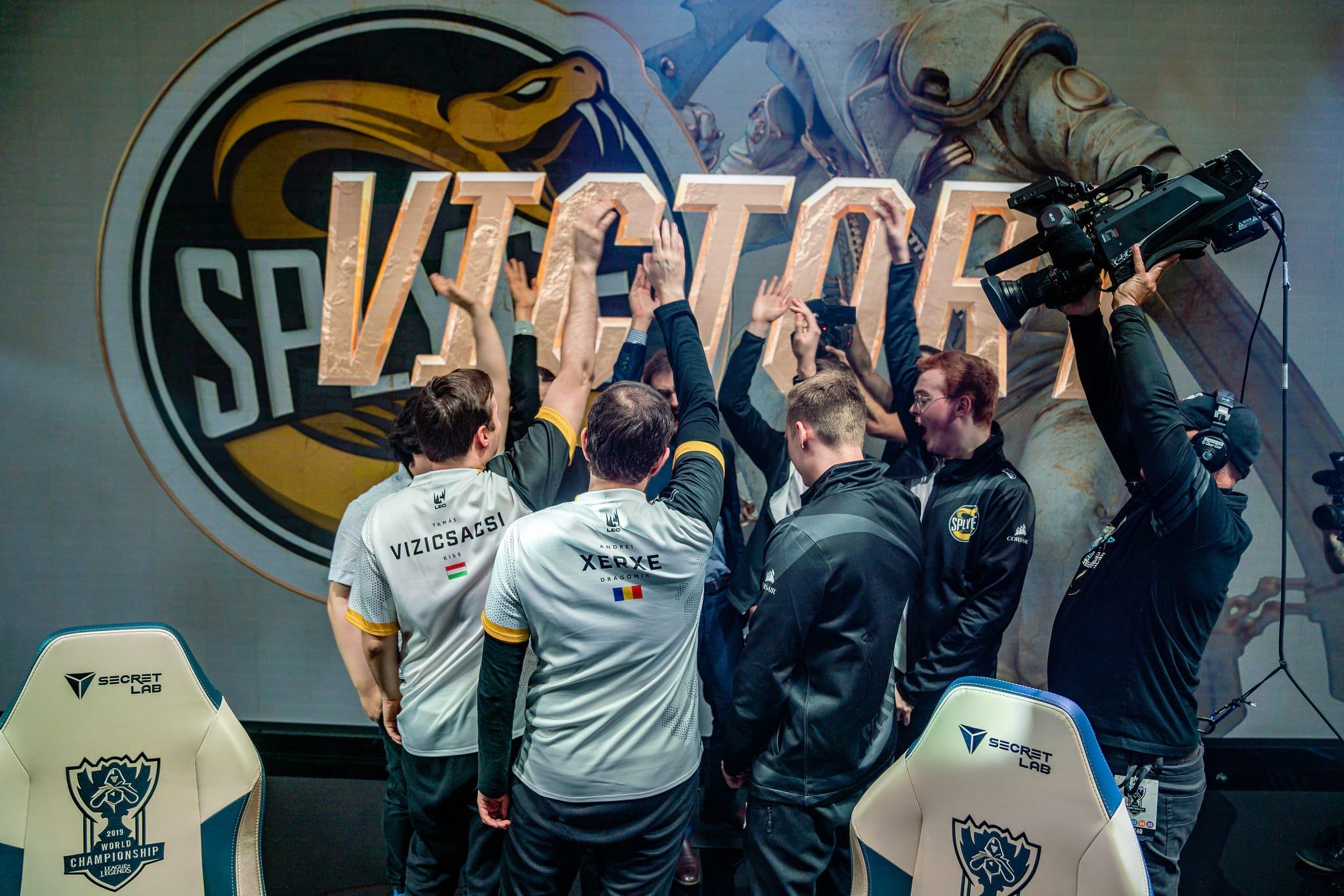 Though he was grateful for the home advantage and the lack of jet lag, Norskeren would have rather traveled. Losing to Rogue Esports so early in the LEC Playoffs meant missing out on qualifying for the LEC matches in Athens, and advancing to Group Stages of the main event, at least, would mean performing at the Verti Music Hall in Berlin.

And on that big stage, Norskeren hopes to make it into Group D, not for a challenge or because he thinks the group would be easy, but because he wants to meet Team Liquid.

“If there is a chance that we have to stop Team Liquid’s chance of getting out of Groups, I’d like to be in that position because I think it would just really be funny if NA’s first seed loses to Europe’s third seed.”

That was the moment I remembered the same giddy confidence Norskeren had when looking forward to playing against Ninjas in Pyjamas and Mysterious Monkeys in the EU LCS 2018 Spring Promotion. Competing in the largest LoL event of the year, and forced to mature after a difficult offseason with limited offers, Norskeren still has up-front ambition and enough of a sense of humor to appreciate the stories he can write on the rift.

Those too can be the cornerstones of perseverance.