The World Championship 2020 is weeks away from starting, and Riot are giving fans a chance to guess the winners with this year’s Pick’em contest that’ll have loads of prizes and drops for fans to earn.

With the ultimate League tournament inviting the world’s best players to compete, it’s the season where fans turn into analysts by publishing their bets of who will get out of the Group stage and ultimately hoist the Summoner’s Cup.

The bid for a Perfect Bracket throughout the entire event will come with an added bit of interest this year, seeing how people will be able to compete for a massive prize including all five Ultimate skins in LoL, as well as an exclusive Alienware Aurora Battlestation.

Needless to say, there’s a lot on the line for Worlds viewers in 2020. Take a look down below for important deadlines and a peek at other prizes that will be gifted as the tournament goes on.

All 5 Ultimate skins are up for grabs in exchange for a Perfect Worlds Pick’Em Bracket.

Then the penultimate stage will feature the four teams left in the Semifinals and Pick’ems for those launch on October 18 and close on October 23 at the same hours as the previous stages.

Finally, fans will decide the winner of the Finals between the last two on October 25 and will have five days before the vote closes on October 30.

The various phases of Worlds 2020.

Once you lock in your picks, all you have left to do is hope your predictions come to pass. Regardless if you’re an LoL esport savant or an Iron 1 analyst, everyone who locks in picks will have something to look forward to.

Simply locking in choices will yield players 500 Blue Essence for the Group Stage, a random champion shard on top of 500 BE for Quarterfinals, 500 Orange Essence for the Semis, and a Hextech chest & Key for the Finals.

To reiterate, for those of you who get a perfect bracket throughout the entirety of Worlds, you can expect to collect all the Ultimate skins including DJ Sona, Spirit Guard Udyr, Pulsefire Ezreal, Elementalist Lux, and Gun Goddess Miss Fortune skins.

A Perfect Pick’em will also land you a ‘replica of the battlestations used at the 2020 World Championship’ in the Alienware Aurora Battlestation. So make sure you take your filling out the brackets this year!

Riot will be giving players chances to win prizes while watching Worlds.

Drops made their debut in League of Legends during the LEC and LCS Summer Splits. Now, they’re going global. You will be able to get exclusive rewards just by watching the big moments happen at Worlds 2020 thanks to the drops system.

How to register for Worlds 2020 Drops

Registering for Worlds 2020 drops takes only a few minutes, but can make you eligible for tons of rewards. All you need to do is opt-in on the LoL Esports website and then watch Worlds live to receive some goodies.

Unfortunately, viewers in China and wider South East Asia will not be able to collect Drops rewards. There will also be some region-specific drops that won’t be available worldwide.

What rewards are on offer in the drops?

A host of different rewards are on offer to help commemorate the 10th World Championship. From hextech chests to summoner icons, to even discount codes you can use outside of League of Legends, there’s plenty of rewards on offer.

Here’s a list of what you can expect to pick up for yourself (subject to change):

Each drop will also come with an “exclusive piece of collectable art,” which will be made available in larger sizes after Worlds for download.

Event triggers for the drops

The drops don’t just happen randomly. They activate when a big moment happens at the big dance. They’re meant to be a memory of the hype moments at this year’s Worlds. Pentakills, Game 5’s, setting new records ⁠— all of these will trigger a drop.

Here’s a list of the triggers for each drop event: 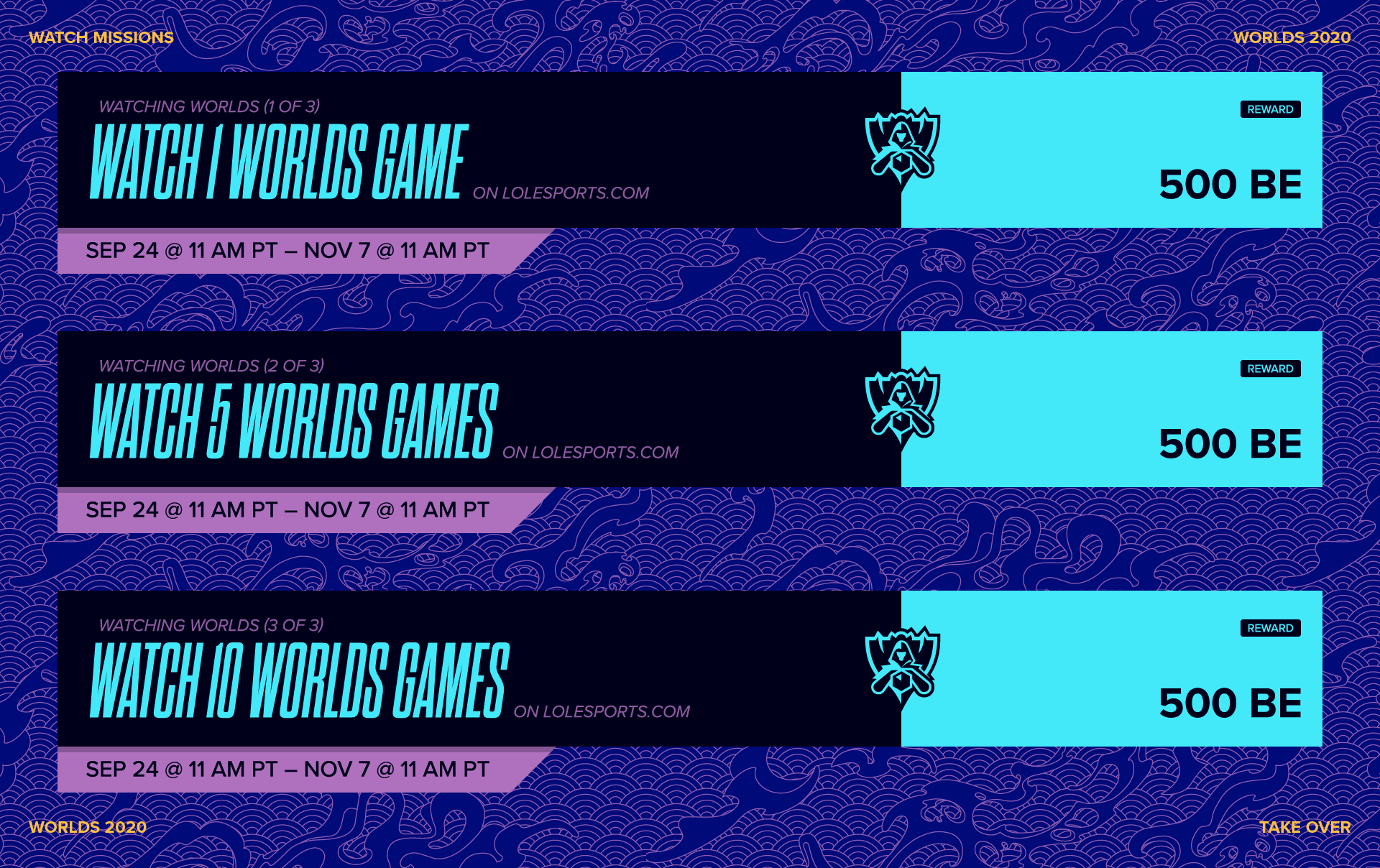 There will also be watch rewards that will give out 500 BE for tuning into Worlds broadcast or catching a VOD on YouTube.

Clearly Riot wants people to be invested in this year’s Worlds, as the company is putting up a ton of prizes and rewards for League of Legends fans to reap during the tournament.