Ubisoft has announced that the Hyper Scape open beta is now available for PC players worldwide, marking a return of the free-to-play battle royale after a successful closed beta Technical Test.

After a one-week Technical Test closed beta that lasted from July 2 to July 8, Ubisoft is putting Hyper Scape back on the menu with an open beta, bringing new features and access for PC users, available on July 12, before its eventual summer launch across all platforms.

The Hyper Scape is waiting.

Join the Open Beta and prove you have what it takes to become a champion of Crown Rush. Download and play for free on Uplay PC today! pic.twitter.com/8cgoUx1TdY

Unlike the Technical Test, this free-to-play beta access will not be regionally limited and will not require Twitch drop or email lotteries to gain access. All PC players can begin downloading on July 12 on Uplay PC to start slaying across Neo Arcadia.

How to download and play Hyper Scape Open Beta

As for new features, the game is launching four modes, one new weapon, one new hack, and three new mechanics for the Crowncast Twitch integration system.

Ubisoft is launching Hyper Scape’s first-ever SMG, the Harpy, that provides an excellent alternative to the Ripper as an automatic gun with high upside in close- to medium-quarters combat. The Shockwave Hack will also be debuting, which provides a “powerful AOE blast” and is the game’s second true damage-dealing hack after Slam. 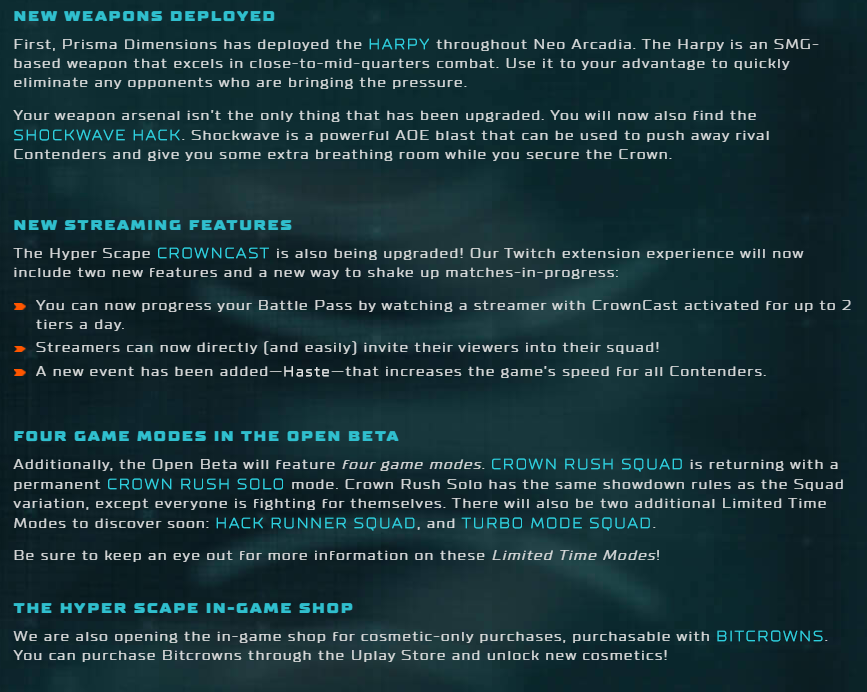 For modes, four will be available: Crown Rush Squad, Crown Rush Solo, Hack Runner Squad, and Turbo Mode Squad. The first is the traditional mode launched during the Technical Test, the second a solo version of that, and the latter two are each limited time modes with details that have yet to be announced.

There will also be three new Crowncast features for the game’s innovative Twitch integration.

Players with linked accounts watching partnered Hyper Scape Twitch streams will now be able to earn up to two Battle Pass tiers per day just from watching, streamers can now easily group up with their viewers through Crowncast, and a new event has been launched: Haste, which amplifies speed for every player in the game.

As for the console release date, this has yet to officially be announced but has still been alluded to. Rod ‘Slasher’ Breslau reported that Hyper Scape will be coming in August.

the open beta Hyper Scape launch will be for PC only, with the console release scheduled for August that includes PC/console crossplay

This coincides with a mention from Senior Producer Graeme Jennings during a July 4 Reddit AMA that consoles would be released later “this summer.” If that’s the case, then it feels very likely that the Hyper Scape open beta will be ending in August with the game officially getting launched on all platforms at that time.