Another job listing at Rockstar Games has added further speculation that GTA 6 is now in development, with the game maker recruiting for a “next-gen character-based open-world” title.

We previously reported on another job listing for an Environment Artist at Rockstar Leeds, to create the “biggest and best open-world environment in the industry.”

Unsurprisingly, this immediately sparked speculation about Grand Theft Auto 6, as well as Bully 2 – another Rockstar franchise which is long overdue a sequel.

However, another job listing, this time at Rockstar North in Edinburgh (which has historically been one of the primary studios for the GTA franchise) gives even more details about what they’re working on.

The role, for an Animation Systems Programmer, will work on “developing advanced animation systems for large open-world character-based games.”

It’s not exactly surprising that this listing is focused on next-gen tech, considering both PlayStation and Xbox are set to launch new consoles in the 2020 holiday season.

The job listing also notes that the team will be “pushing the boundaries of character animation on next-generation hardware.” 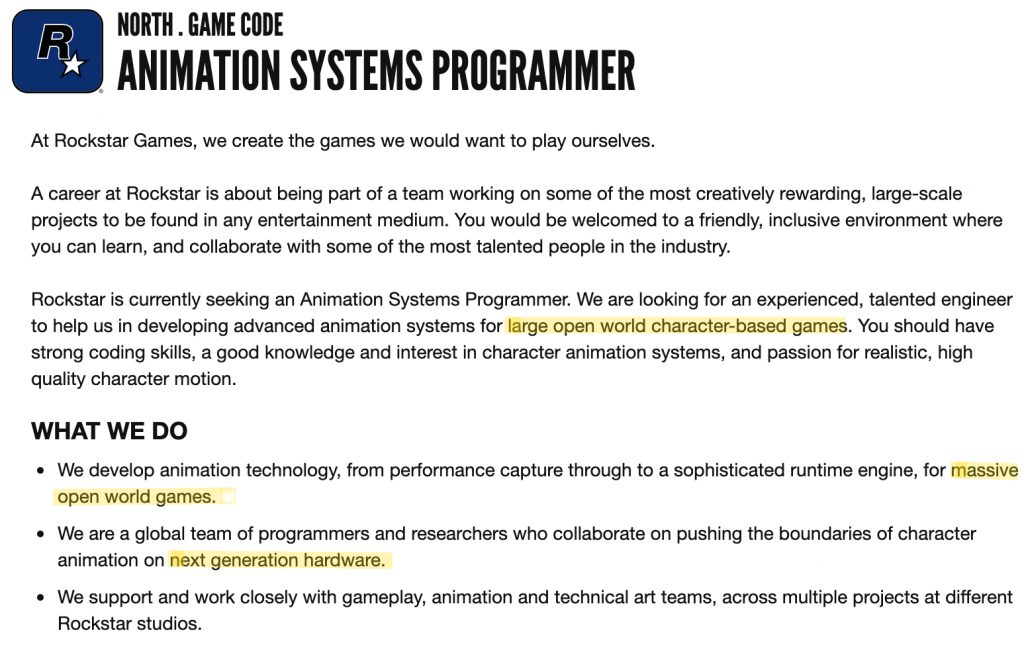 The Rockstar North vacancy sounds like a possible GTA project.

When will GTA 6 release?

Given the emphasis on ‘next-gen’ in both of these job listings, it’s safe to presume that whatever Rockstar is working on is set to be available on PS5 and Xbox Scarlett.

However, we saw with GTA V that a double release, both on current-gen and next-gen, worked a treat, essentially doubling sales for the game.

We’re perhaps too close to the release of the next-gen for that same method to be used though unless GTA 6 is released in late 2019/early 2020, which is incredibly unlikely.

It’s also possible that Rockstar are putting Grand Theft Auto on the backburner, since GTA Online is still performing so strongly, and are, instead, working on a sequel to Bully, LA Noire, or perhaps a new franchise completely.

GTA Online hit a new record player base following the release of the Casino update, and it remains a cash cow for Rockstar, who will be wary of killing off its popularity with a new mainline Grand Theft Auto release.