A new job listing at Rockstar North – one of the many studios of Rockstar Games – has ignited speculation that a new Rockstar title, potentially GTA 6, is on its way.

It’s difficult to remember a game as anticipated as another Grand Theft Auto installment – particularly given the fact that there is, as of the time of writing, no official confirmation that fans will see another GTA title.

However, another GTA game does seem overwhelmingly likely when factoring in the critical and commercial success of the past installments. While there are a number of rumors and leaks surrounding the future of the series, it’s hard to discern the fact from the fiction.

GTA V is generally thought of as one of the greatest video games ever made.

However, recent speculation of a Grand Theft Auto 6 has centered around a job listing at Rockstar North, a British subsidiary of Rockstar Games based in Edinburgh, Scotland.

The job listing is for a ‘Technical Build Engineer’ and would involve “being part of a team working on some of the most creatively rewarding, large-scale projects to be found in any entertainment medium.”

Many of the responsibilities listed hint at a game being deep in development, as the build engineer must “work closely with developers and QA to ensure builds are stable upon release.” 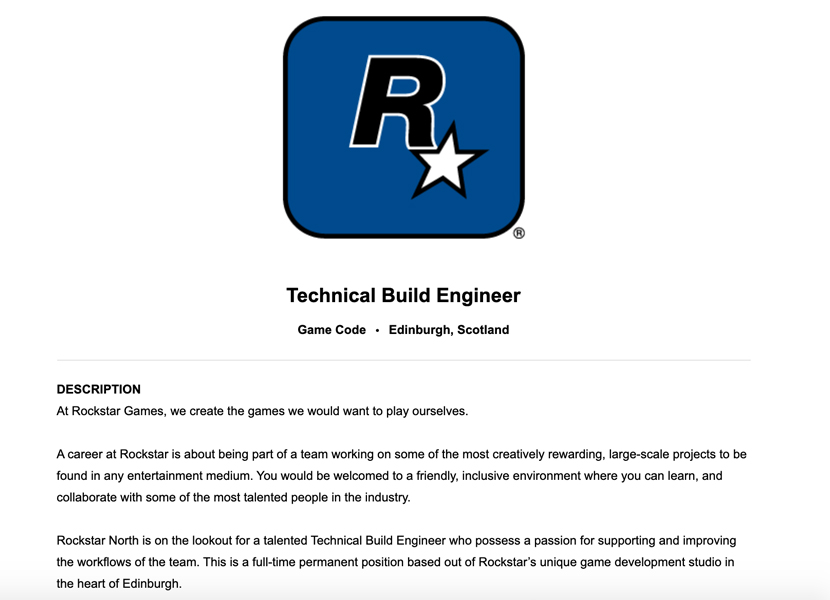 There is no confirmation that the job is related to a Grand Theft Auto game. However, the description of the projects as “large-scale” suggests it is one of Rockstar’s bigger franchises. Grand Theft Auto has not seen a new title since 2013, when GTA V launched.

When paired with Rockstar North’s history of development work on Grand Theft Auto games, the news has got fans incredibly excited. One Twitter user hoped that it meant “they’re almost finished creating the game.”

Rockstar North has a new job opening for a Technical Build Engineer. We don't know if this is related to GTA 6 however this role is to test things like alphas and betas of games so perhaps they're almost finished creating the game.https://t.co/aDZBdznfmR

The Edinburgh-based studio was behind the original Grand Theft Auto – when it was known as DMA Design Limited.

It should be reiterated that there is no guarantee that the job listing is related to a Grand Theft Auto title.

While it does seem likely we’ll see a new GTA game at some point in the future, it is all but guaranteed it will not be on this current generation of consoles (PS4/Xbox One).

The past installment, 2013’s GTA V, was originally released on Xbox 360/PS3, before being re-skinned for current-gen consoles. It is widely considered as one of the best video games ever made.