Ninja, Ali-A and more feature on Forbes’ 30 under 30 Games list

Numerous big names in the esports and gaming industry have made Forbes’ 30 under 30 US & Canada list for 2019, including the likes of streamer Tyler ‘Ninja’ Blevins and YouTuber Alistair ‘Ali-A’ Aitken.

The 30 under 30 list, first started in 2011, selects 30 influential figures in 20 industries, in recognition of their achievements and contributions to said industry.

One such industry is ‘Games’, for which 30 of the most important and influential names have been selected.

Former Halo professional turned streamer, Tyler ‘Ninja’ Blevins makes the list, which is unsurprising given his massive rise to fame as the world’s most popular Fortnite streamer.

“Ninja is the most followed gamer on the streaming platform, Twitch, with 12 million followers. This year, Blevins broke Twitch’s concurrent viewer record for a single user with over 600,000 people watching at once. He also finished first at Epic Games’ first sanctioned Fortnite tournament and earned a sponsorship from Red Bull.

Similarly, YouTuber Alistair ‘Ali-A’ Aitken, who has over 15 million subscribers, is recognized in the games category.

“Known as Ali-A, Aiken is one of the most popular content creators for Fortnite, having amassed 15 million subscribers and 5 billion views on YouTube. He’s won two Guinness World Records for subscribers and also stars in the CBBC car show, Ali-A’s Superchargers.” 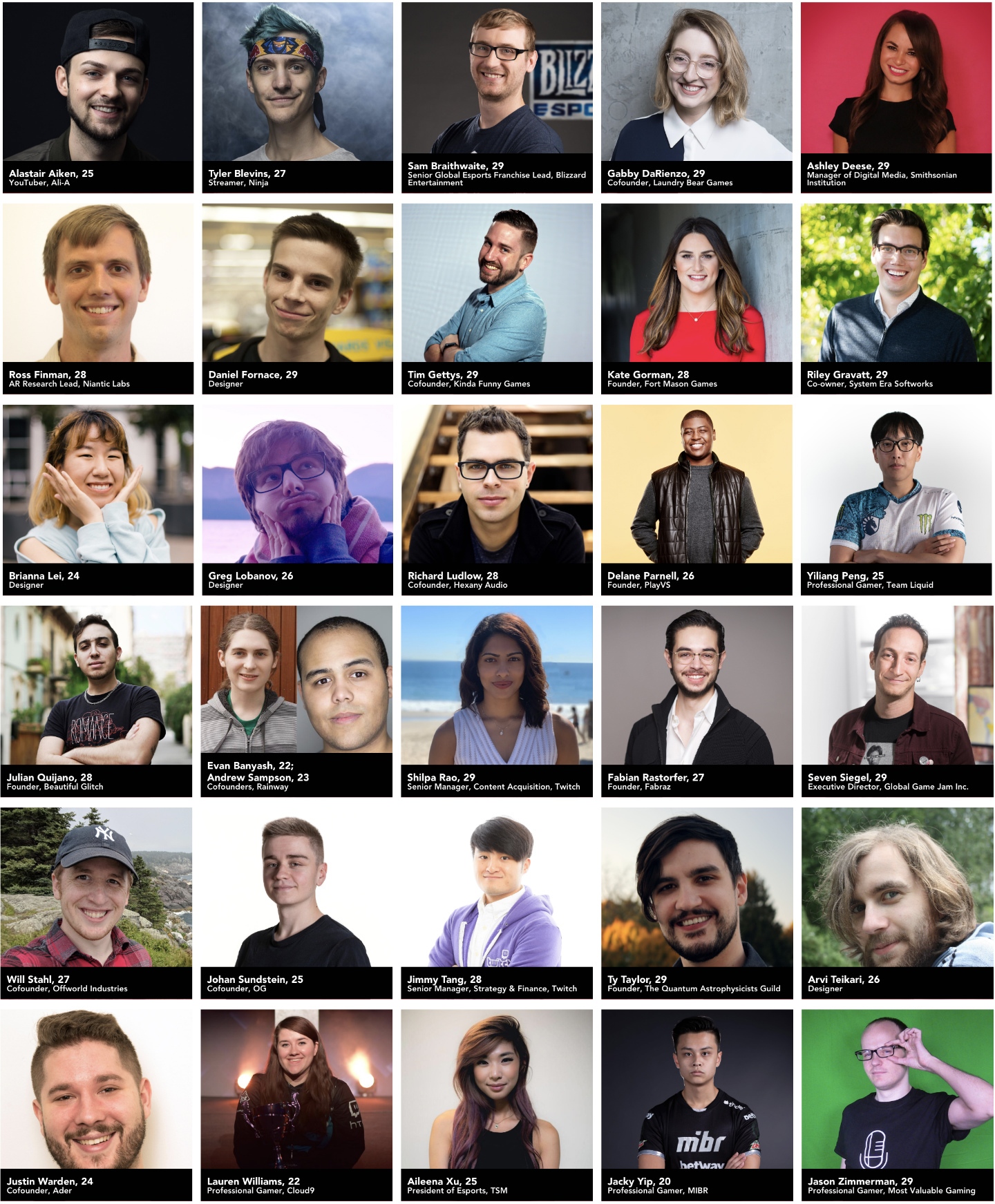 “One of the most recognizable North American players in Counter-Strike: Global Offensive, “Stewie” helped bring the region its first Major championship when Cloud9 took top honors at the ELEAGUE Boston Major in January. He has since moved to the team MIBR where he continues to shine, placing first at the ZOTAC Cup Masters in August.”

Considered one of the best American-born players in League of Legends, “Doublelift” plays the role of marksman on Team Liquid. Known for both his skill and braggadocios personality, Peng has won five North American championships and garnered half-a-million fans on YouTube and 800,000 on Twitter.

Some of the industry figures in esports also receive recognition, including TSM’s President of esports Aileena Xu, Co-founder of OG Johan Sundstein, Esports lead at Blizzard Sam Braithwaite and others.

Esports also features in some other categories, with Cofounders of Blitz Esports, Jonathon Lin and Rick Ling, featured in both the ‘Immigrants’ category and the ‘Media’ category.

Interestingly, Ninja, Ali-A and Doublelift are also named on the ‘Celebrities’ list, indicating just how mainstream the biggest names in gaming are becoming, when alongside names such as Post Malone, Blake Griffin and 21 Savage.

Delane Parnell, Founder of PlayVS – a web app used by US schools to create esports teams and participate in competitive gaming leagues – is featured on two lists, ‘Games’ and ‘Big Money’.