Magic: The Gathering Hall of Famer and World Champion, Yuuya Watanabe, has been disqualified from Mythic Championship 2 after marked cards were found in his deck.

Magic: The Gathering is currently one of the most popular card based games and often runs many competitive tournaments around the world for its growing fanbase.

It came as a shock to everyone when one of the more legendary MTG players, who has a world championship and multiple player of the year awards to his name, Yuuya Watanabe was disqualified from one of these tournaments, Mythic Championship II. 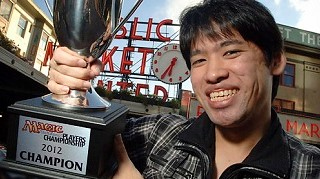 This was reported on the official Magic channel broadcast on Twitch, when a deck check in round 15 of the tournament revealed Yuuya had been playing with marked cards during his competitive matches.

There were eight cards allegedly marked in Yuuya’s deck in total and after the judging staff ruled the markings as unlikely to be naturally caused, they disqualified Yuuya from the tournament shortly after.

It was then announced that a further investigation would be launched into Yuuya Watanabe’s infraction by the Magic Pro League.

Yuuya has since apologized to his fans in Japanese after being disqualified from the tournament, roughly translated Yuuya gave his apologies to his supporters and claimed he was unaware the cards were in such a state and only noticed it when the judge brought attention to the markings, before ultimately agreeing with the ruling.

Many were disappointed to see such a big name in the competitive magic scene getting disqualified for cheating and were unsure what this meant for Yuuya’s future.

Overwatch League caster Mitch ‘Uber’ Leslie was among the list as he simply responded with “Dude what the fuck.”

Dude what the fuck

This is not the first time a Magic: The Gathering player has been exposed for foul play, as another professional player, Rei Sato was disqualified for cheating earlier in January 2018 at the Grand Prix Prague.

This has lead many fans to question the legitimacy of many of the professional Magic The Gathering players that are actively competing.