The game development kits for Sony’s iteration of the next generation of consoles are out and about and in the hands of game developers. Leaked images of the kits appeared online, and fans were surprised to see what this dev-only version of the PS5 looked like.

Sony and PlayStation fans will have to wait one more year to get their hands on retail version of the PS5, a staple system of the next generation of video game consoles.

But game developers need their hands on those consoles now if they want to be included in the collection of launch titles, which are pivotal in determining a new console’s early-game success.

The dev kit PS5s have two wired controllers on top of and to the side of them, and the same Twitter user that posted the photo says that these are the new Dualshock 5 controllers. These controllers don’t have the trademark light under the charging port, and that port appears to be a USB-C instead of the traditional micro USB.

For those confused about the look of the PS5 dev kits, dev kits, in general, do look drastically different from the eventual retail version. You can see in the background to the right are two PS4 dev kits, and the dev kit for the PS4 looks like a toner printer. 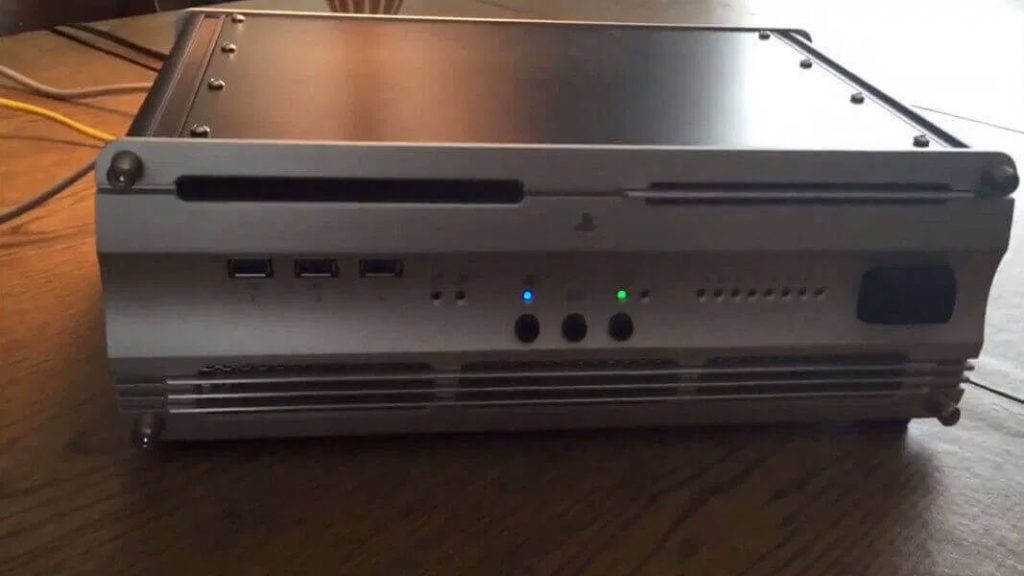 Twitter was filled with replies echoing the above sentiment; that the PS5 will likely not look like the dev kit. Some even shared the image of the PS4 dev kit shown above as evidence to this fact, while others jokingly shared images of what the original Xbox was going to look like.

Some suspected that the V is to represent the Roman numeral for 5, but The Verge’s senior editor Tom Warren insists that the design is to allow stacking and proper airflow.

yes, this is the PlayStation 5 devkit. The reason it's large and v-shaped is to make them more easily stackable for devs who are running multiple stress tests. The cooling is optimized to push air out of the sides and center https://t.co/pc3wJw2A6v

Some users still expressed concern that the PS5 might run especially loud if Sony keeps this fan design, while others are worried about potential heat issues if the system requires that sort of extensive air cooling system. The loud fan noise from the PS4 has been a common complaint for that console.

The PlayStation 5 was confirmed back in October, and images of these dev kits confirm the designs that were leaked back in August.