2K Games, the massive California-based video-game publisher, have apologized after a number of its official pages were hacked and numerous offensive remarks were posted.

There has been a host of cyber-attacks against popular video-games recently. Lizard Squad, the infamous British-based hacking group, claim to be behind attacks against both Call of Duty and Fortnite, as well as threatening the UK’s Labour Party leader, Jeremy Corbyn.

This led to members of Lizard Squad reportedly being arrested on November 15. On the same date, a cyber-attack against 2K led to a number of offensive, racist remarks being made across a number of their official social media pages.

2K are well known for their sports games, producing annual installments in their NBA and WWE series.

This year’s games have received more criticism than usual, with many arguing the 2K20 games are unfinished and feature a frustrating number of glitches.

On November 15 the company’s main Facebook page – which had previously been unused for a couple of years – began posting racist messages, leading many followers to immediately (and correctly) assume that the page had been hacked.

The Facebook page dedicated to the company’s WWE game was also compromised, and posted similar messages. 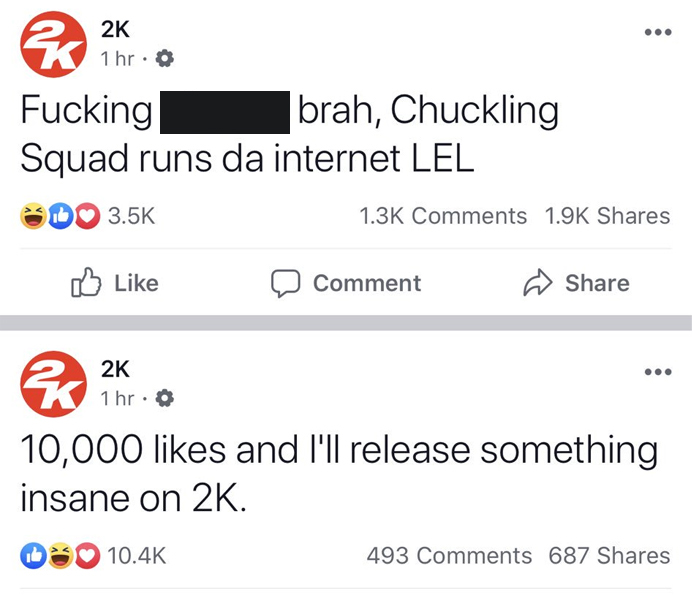 The messages remained up for a few hours before being deleted, presumably when 2K regained access to their accounts.

They have since posted an apology to their WWE account, stating: “Social media accounts across the 2K label were compromised early Friday evening. Unfortunately, offensive material was posted that does not reflect the values of 2K or our partners.”

They concluded their post by apologizing to any people who were offended by the vulgar messages.

The apology, in full.

The latest in a line of high-profile hacks, 2K will likely be looking to improve their account security. It is currently unknown who was behind the hacks to their social media pages.

It seems an unfortunate trend that many video games are becoming the subject of increasingly common cyber attacks.