A special concept skin designed by a talented Fortnite fan would allow players of the popular battle royale game to celebrate the life and untimely demise of Kevin the Cube.

Affectionately named by members of the Fortnite community, Kevin has been part of the landscape of the game since August 2018, appearing suddenly, and then meandering it’s way around the map until it came to its final resting place at Leaky Leak.

Yesterday, fans had an opportunity to say their goodbyes to Kevin, as it left the game for good during the in-game event that took place to mark the end of the title’s Halloween themed mode, Fortnitemares.

At 1pm ET on Sunday, November 4, Kevin the Cube began to spin, gaining speed and momentum until it eventually cracked open, transporting players to a strange white dimension that’s never been seen before in the game.

In this incredible new area, fans saw a butterfly flying around, with the players character eventually touching the butterfly, which sent them out of this strange realm and back into the normal Fortnite map.

The concept skin created by Reddit user ‘Noblebatterfly’ is titled ‘Incarnation of Kevin’, and pays homage to the history of Kevin. Her legs are covered in the runes that the cube left behind while it travelled around the map, while her chest has a piece of the cube protruding out.

The skin is purple, to match Kevin the Cube’s own colour, and has beautiful wings on her back, a nod to the butterfly which appeared in the moments after Kevin’s explosion. 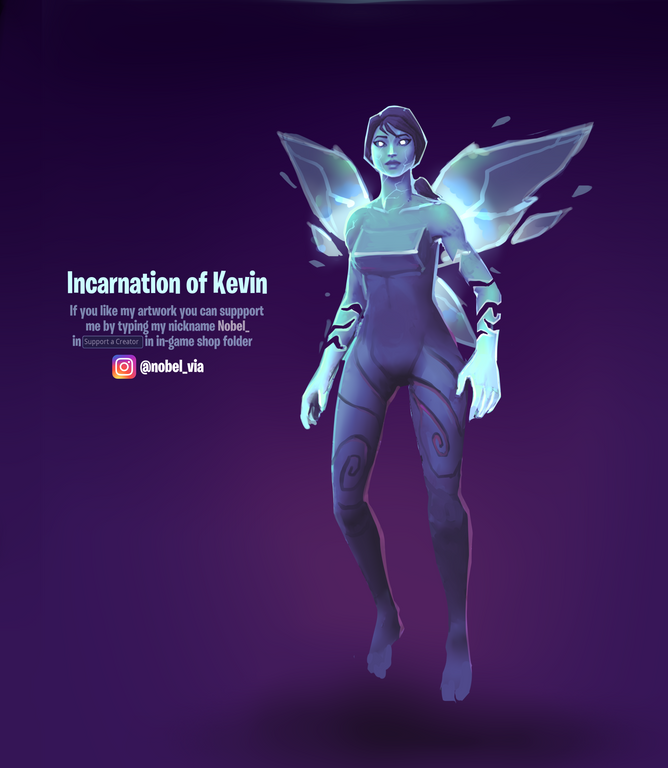 The ‘Incarnation of Kevin’ skin is covered in references to the cube’s time in Fortnite.
[ad name=”article3″]

The aftermath of the end of Fortnitemares has seen the islands which had been floating around Kevin plummet back into Leaky Leak, while fans remain unsure as to what the butterfly actually means.

Unfortunately, fans of Kevin the Cube will have to find their own way to mourn the loss of their falled friend, as this skin is just a concept, and there is no official announcement from Epic Games that it will be making an appearance in Fortnite.