This new concept would drastically change the map in Fortnite

Despite the fact that major changes have been made to the map of Fortnite Battle Royale since the game’s release last year, many players have been clamoring for a brand new map all-together.

Reddit user ‘CurdledART‘ has created a concept for Fortnite that would fundamentally change how the map looks.

While the concept retains many of the locations that are currently on the map, it’s so dramatically different than the current layout that it could be considered a brand new map.

In addition to keeping many locations, it also proposes for the return of some fan-favorite points of interest, such as Anarchy Acres, Moisty Mire, the old school Factories, and Prison.

The biggest change that this concept introduces is splitting the map into 13 individual islands, some of which will have terrains and seasons that differ from the others.

In addition, the image also shows that a gigantic volcano would be added at the center, its size dwarfing all of the other major locations on the map. 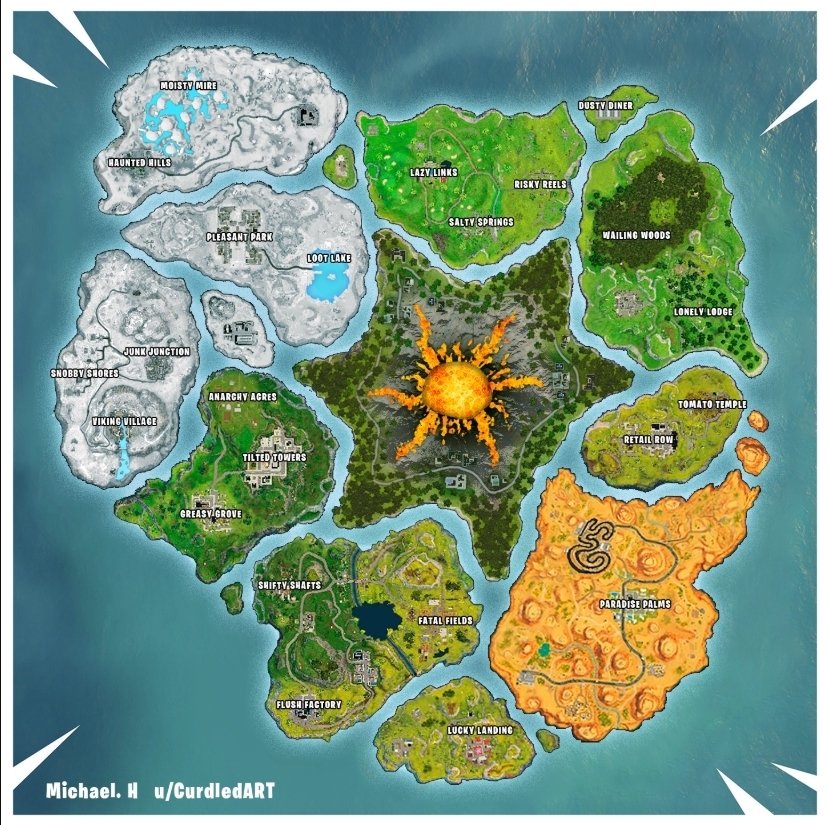 While the concept above is certainly too radical of a proposition for Epic Games to entertain, certain aspects of it align with what players have been asking for quite some time, such as the return of some of the popular locations listed above, which had been removed from the map during different periods of change.

Another idea is the implementation of seasonally themed landscapes; many have been asking Epic to start changing the look of the map based on the time of the year.

Some have predicted that there will be snowy areas added to the map for the winter season, a theory that was hinted at as a possibility by community manager ‘MrPopoTFS’ in a reply on Reddit.

“We have definitely head the feedback through the seasonal map changes like that would be great!” he wrote.