After allegations of cheating marred the first set of qualifiers for the $30 million Fortnite World Cup, FaZe Clan pro Turner ‘Tfue‘ Tenney joked that he’ll recruit the accused player to help him secure his own spot.

An aspiring Fortnite player, known as ‘Dubs’, apparently cheated his way to a 2nd place finish in the online qualifiers, which would give him a ticket to the finals in New York in July.

Messages were posted online which appear to show Dubs thanking the seller of said cheats, and complimenting their effectiveness, stating: “[T]his cheat is lethal … my duo partner didn’t even notice anything.” 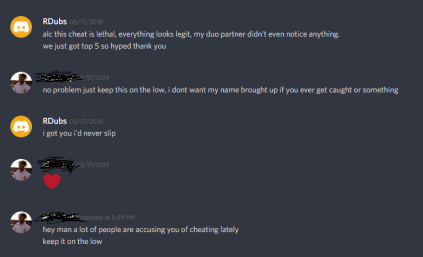 The messages cannot be verified as authentic however, and Dubs himself has vehemently denied the accusations, explaining on Twitter: “I understand there’s been a lot of accusations about me cheating, but I’m not, and I’m willing to stream future solo qualifiers to show you that. […] All I have to say is fuck all the people that don’t believe. I’m not cheating and I’ll see you guys at the World Cup.”

Because Dubs managed to take 2nd place in the qualifiers – potentially taking another player’s spot – many pro players were understandably concerned.

Tfue, who has already stated he will be retiring from competitive play after the World Cup, made light of the situation, joking that he would recruit Dubs to be his partner for upcoming qualifiers.

Wanna partner with me for duos next week @Dubsfn

Tfue and his actual duos partner, Dennis ‘Cloak‘ Lepore, discussed the situation on stream too, and Cloak also wanted in on the deal.

“Alright, you get [Dubs] this week and then I’ll get him next week”, joked Lepore, “and then once we both get there, since we’ll be on LAN, then we can be duo partners.”

Other pro players were concerned that the cheating problem may be more widespread too. If players can be cheating without detection by anti-cheat systems, how big of a problem could it really be?

With literally millions of dollars on the line, there is an obvious concern that developers Epic Games must address, as CLG’s ‘WishhYaLuck’ makes clear.

I understand everyone is coming for johnny tk and dubs rn

BUT HOW MANY OTHER MOTHERFUCKERS ARE RUNNING THIS SHIT MAN

I got triple headshotted game 2 and died 26th place. That shit was fishy as fuck. Man fuck this game.

Team Kaliber kicked their own professional player, JohnnyK, after it was revealed that he had purchased cheats with the intention of using them in World Cup qualifiers.

Dakotaz and FaZe Clan’s Avxry also discussed the issue, with the latter pointing the finger at lack of developer engagement on the issue.

I mean when the devs and heads go MIA during the most important event in the games history. What can we expect

First place in the solos tournament at the Fortnite World Cup will net $3 million – the largest prize ever for a single player in esports history.

With such a ridiculous amount of money up for grabs, it is alarming that cheating most likely is at play in the qualifiers.