Samsung stores have been forced to create warning signs to stop customers from trying to download Fortnite on in-store demo phones in an attempt to acquire the Galaxy skin.

In a picture uploaded by 100 Thieves Fortnite player Archie ‘Parallax’ Shrader, a Samsung store was forced to inform members of the public that the demo phones in their stores were not able to download Fortnite.

The sign also confirms that the demo phones wouldn’t grant skins, and customers should refrain from signing in to any accounts, stating;

“All Samsung demo phones will NOT download Fortnite or the “skins”. Please do not install any information or downloads onto the demo phones, thank you.” 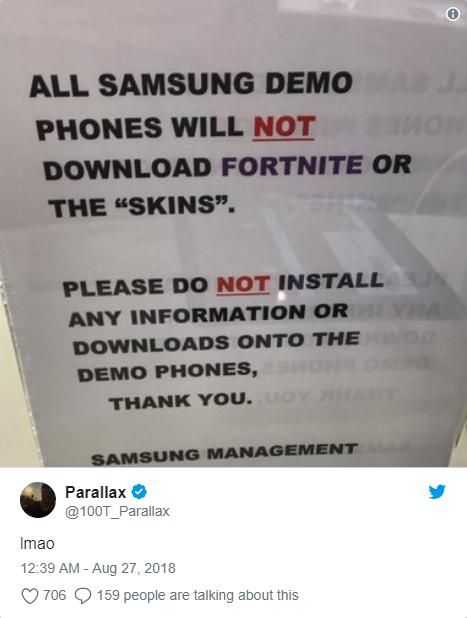 Avid Fortnite fans were trying to use the Galaxy Note handsets on display to try and unlock the exclusive Galaxy skin.

Unfortunately, once the Galaxy skin is unlocked on a device once, it cannot be unlocked again, so if the phone was later sold as a refurbished device, the new owner wouldn’t be unable to unlock the skin

The Galaxy skin is only publicly available to players that own a Samsung Not 9 or Tab S4, making it one of the rarest in the game.

Avid fans of Fortnite are always on the hunt for the newest and rarest skins, and you could argue that they deserve credit for their ingenuity and perseverance. Samsung, however, clearly don’t feel the same way!