Spotted in the update files for the V5.40 patch, dataminers have discovered the new event, but it’s currently unknown what the event will actually be.

The Sphere Spawn event is currently scheduled to take place on Thursday, September 6 at 9:00 AM EDT (6AM PDT, 2PM BST, 11PM AEST), and then again on Saturday, September 8 at the same time. 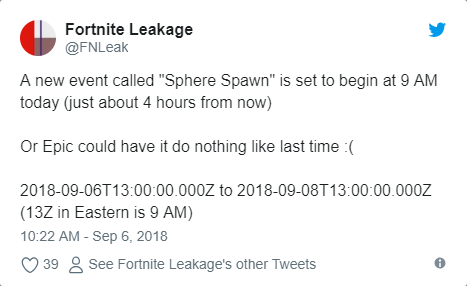 It appears that the Sphere Spawn is an entirely new event, and may not be related to the Cube which was been travelling across the map, leaving runes and low-gravity zones in it’s week.

Events that have taken in place in the past have been found by dataminers in a similar fashion, but there is no guarantee that the Sphere Spawn will actually happen.

The new Sphere Spawn event isn’t the only thing found in the files of the 5.40 patch. Leaks suggest that weapon skins may make their way to Fortnite in a future update, while various new skins, gliders and harvesting tools have also been found.

The V5.40 update features the new High Stakes event, along with the new Grappler item and the Getaway Limited Time Mode, and is live right now.