The past 24 hours have seen widespread discussion throughout the vast community of Fortnite: Battle Royale.

On July 4th, Epic Games announced that it was bringing back that rare ‘Red Knight’ skin to the Item Shop on July 5th, drawing a variety of reactions and responses from players.

Since its release in December, the Red Knight has only appeared in the Item Shop a few times, the last time being on February 20th.

This has led to it becoming one of the more rare cosmetic items in the game, as some of the earlier players were able to purchase the skin but most newer ones never got the chance to own it.

100 Thieves YouTuber ‘NoahJ456,’ whose content focuses around Fortnite, had an idea on how Epic can still allow newer players to purchase some of these skins while keeping the originally sold ones rare.

The trick would be to introduce some a color change that would differentiate the original ones from the newer.

My idea to keep “Rare Skins” rare but let everyone get a chance to use it:

Skins that get re-released (Ghoul Trooper, Skull Trooper, Red Knight) come back in a different color.

For example, Skull Trooper returns in a dark purple version. Black Version is OG only.

While this idea makes sense and could work to keep both sides of the debate happy, it may not exactly fulfill Epic’s goal when it comes to re-releasing these skins.

Although they have not explicitly stated this as a reason, but many are of the belief that bringing back rare skins to the Item Shop is a way for Epic to combat illegal account selling and scams, which would still go on if they used NoahJ’s idea.

Hundreds of outfits have been added to the Fortnite Item Shop since launch, but we’re going to take a moment to look back at the best Fortnite skins ever released.

One of the most exciting parts of Fortnite, aside from those tense showdowns near the end of a match, is the addition of new skins and cosmetics in the game. Some of these can be purchased, while others are unlocked by completing challenges and earning XP.

They may not grant you any competitive advantage (unless you’ve been using the superhero skin, that is), but getting a hold of the coolest skins in Fortnite definitely gives you bragging rights among friends and other players.

New skins are one of the best parts of Fortnite.

Besides, what’s the point in celebrating those hard-earned Victory Royale wins if you haven’t got a sweet skin to show off, right?

From epic crossover skins like Marvel’s Storm and Halo’s Master Chief to originals like the banana-human hybrid Peely and even Agent Jonesy himself, everyone has their favorite skin they just keep going back to.

We’ve scoured the Fortnite history books to put together a list of 14 of the best skins that have graced the game since it debuted in 2017. Some of these will return to the item shop at some point, so keep an eye out.

The Deadpool skin was one of the best crossovers in Fortnite.

Are there any Marvel superheroes more beloved than Deadpool right now? Until the hit 2016 movie, he was resigned to being a favorite of comic book readers, but now that he’s found mainstream success the whole world has fallen for the wise-cracking ‘merc with a mouth’.

When he was introduced as a challenge reward in Chapter 2 Season 2, players went crazy for it, and we can see why; as one of the few Marvel characters who would actually use an assault rifle or a rocket launcher in his own movies and comics, he’s the perfect crossover skin.

Lexa has become one of the most beloved original Fortnite skin.

Of all the recent original Fortnite skins, Lexa has become the most popular. She’s regularly referred to as the ‘anime girl’ of the franchise thanks to her unique cel-shaded anime-style design, pink hair, and wide-eyed look.

The best part about Lexa, though, is the unlockable built-in Hunter Protocol emote that ‘sets mechafusion levels to maximum’ and lets players transform her appearance entirely, becoming a robotic hunter in the process.

Marshmello welcomed over 10 million players to his Fortnite concert.

Fortnite immortalized popular DJ Marshmello forever when they put on a concert hosted by the music icon. 10 million players tuned in, and he even got his own skin complete with unlockable cosmetics.

Aside from being an epic skin, Marshmello showed off what the future of live entertainment could look like, paving the way for rapper Travis Scott to host his own Fortnite crossover concert a year later.

Okay, so the design might not be anything special, but what makes Renegade Raider a standout is the fact that it was only ever available as a Battle Pass reward in Chapter 1 Season 1, making it arguably the rarest skin ever in the game.

Wearing this during a match makes it clear to other players that you’ve been making trips to The Island since the very beginning, and that alone means it deserves a special place on this list.

The Mandalorian came with a Baby Yoda back bling.

Hopes were high following the glorious Marvel-themed Fortnite Chapter 2 Season 4, but follow-up Season 5 managed to live up to those expectations and more with the arrival of Star Wars bounty hunter The Mandalorian.

What made this skin even more special were the extra pieces of armor you could unlock as you progressed through the Battle Pass. Oh, and the reward for getting to Level 100? A Baby Yoda back bling. It’s epic. 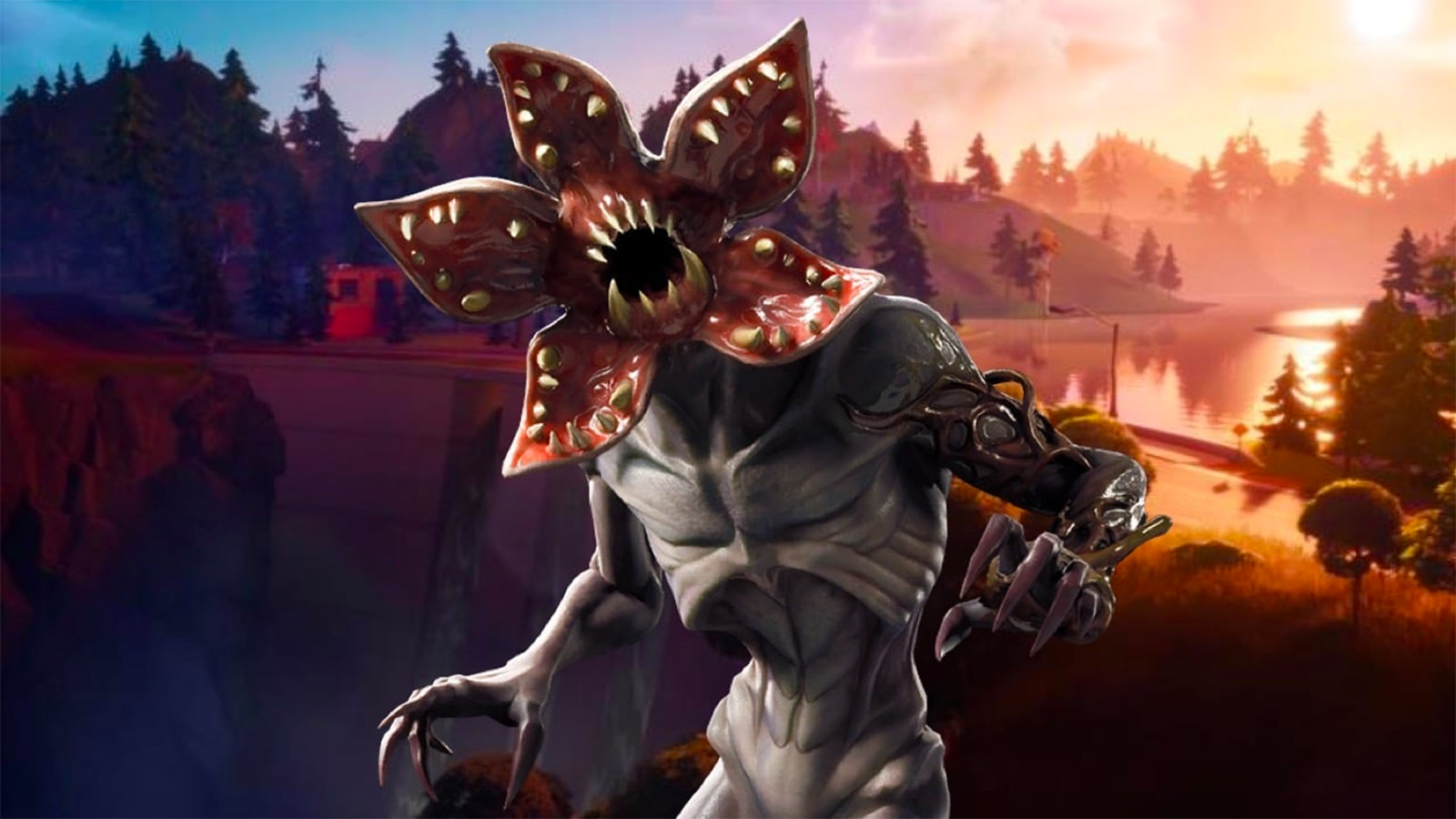 The Demogorgon is one of Fortnite’s scariest skins.

Hailing from the hit Netflix series Stranger Things, the Demogorgon might be the most terrifying skin we’ve ever seen in Fortnite. Imagine seeing this thing pop out of a dark corner during the night on The Island? We’d rather not.

The Demogorgon is one of those skins that you wouldn’t expect to translate well to the game, but in reality, it looks incredible. Special shoutout to fan-favorite character Chief Hopper, who also got his own skin in the game.

The Walking Dead was a surprise addition to the Fortnite universe.

The Walking Dead’s Michonne is one of the most bad-ass characters in TV history, so seeing the zombie slayer bring her katana to The Island alongside Daryl Dixon actually made perfect sense, despite it being an unexpected crossover.

The best part about the Walking Dead skins was the fact that they were kept entirely under wraps until they were surprise announced at the 2020 Game Awards. Most skins leak well in advance, but these were a true shock.

Peely has become one of Fortnite’s most iconic characters.

It’s a ridiculous skin, we can all agree on that. But whether you love it or hate it, Peely has become a mascot for Fortnite, regularly becoming the butt of jokes and often popping up as hidden easter eggs in various locations with each map update.

You’ll likely be spotted from a mile away if you’re wearing Peely or one of the various goofy-looking spin-off skins like Agent Peely or P-1000, but we think that’s worth it to bring a bit of fun to The Island.

Wolverine had one of the best Marvel skins in Fortnite.

Chapter 2 Season 4 of Fortnite introduced a whole bunch of Marvel superhero (and villain) skins to the game including Black Widow and Iron Man, but the clear standout was Wolverine, the mutant poster boy for the X-Men.

His skin was one of the best-designed crossovers we’ve seen in Fortnite, and you’ll regularly see him appear in matches even now the season is long over. A ‘classic’ variant was also available, although we prefer the original.

Galaxy was only available for a select few players, making it very desirable.

Fortnite’s collaboration with Samsung produced a few exclusive skins, but none has been more in-demand than the epic Galaxy skin, which was only available for players who purchased a Galaxy Note 9 or a Galaxy Tab S4.

The hype surrounding the skin was so high that some players would visit Samsung stores to log in on one of the devices and try to claim it for themselves. Unfortunately, there’s no way of getting it anymore, as the skin was vaulted in early 2019.

Batman’s arch-nemesis The Joker was a highly-anticipated addition to Fortnite.

Not a fan of Marvel? No worries, as there are plenty of DC characters (although admittedly, not as many) you can get your hands on in Fortnite instead. The standout of the bunch is, of course, Batman’s archnemesis The Joker.

Obtaining this highly-desirable skin will cost you a pretty penny, as it can only be unlocked by purchasing The Last Laugh Bundle, which will set you back just under $30. It also comes with Poison Ivy and Midas Rex, though, which is nice.

Midas is based on the Greek myth.

Midas is one of Fortnite’s best-designed original characters, being simple yet highly-desirable. You had to work hard to unlock the leader of the spies, too, as he was the Level 100 reward for Chapter 2 Season 2’s Battle Pass.

The skin has since received several variations like Shadow Midas and Midas Rex, and has become so popular that rumors of a ‘Female Midas’ skin coming to the game have been doing the rounds for a while now.

Venom was one of the most anticipated additions during Fortnite’s Marvel season.

When Fortnite announced that the theme of Chapter 2 Season 4 would be Marvel superheroes, many players were wondering whether a Venom skin could appear in the game. It seemed unlikely, but it actually happened.

Of course, the skin is huge and it did cause some issues with visibility when aiming, but that wasn’t enough to put off players who were waiting for the iconic Spider-Man supervillain. It looks epic, that’s for sure.

The Superhero Skin is one of the most versatile in the game, giving players countless customization options to create the superhero of their dreams. As far as bang for your buck goes, this might be one of the best in the game.

It’s a controversial one, though, as the skin has faced some backlash from players for being a “pay-to-win” skin: When turned all-black, it allows players to remain hidden in the shadows, giving them an unfair advantage.

That said, it’s definitely worth being on the list.