One of the more frustrating things that can happen in Fortnite is getting knocked and eliminated while your teammates are still alive.

This was almost the case for Team SoloMid pro player ‘Daequan,’ who was playing with popular streamers ‘Ninja’ and ‘DrLupo’ on August 27.

With their Fortnite match nearing its end, Daequan and Ninja came up against a full squad of players just outside of Fatal Fields, who managed to knock the TSM pro.

With DrLupo already eliminated, Ninja had all the work left to do to get himself and his downed teammate out of the sticky situation.

The result was a spectacular effort from Ninja, as he took down three of the enemy players with three, well placed snipes, not wasting a single shot in the process.

He then finished things off by using a Bounce Pad to get to and eliminated the last enemy player, and revive Daequan before his health bar had fully diminished and/or the Storm had started moving in.

It was business as usual for the Fortnite extraordinaire, who is so used to making outstanding plays like this that he did not bat an eye or lose his focus throughout the entire process, even planning out their next move just as he had finished that incredibly difficult set of gunfights.

As he alluded to in his followup tweet, sometimes you just have to do what needs to be done to save your teammates. 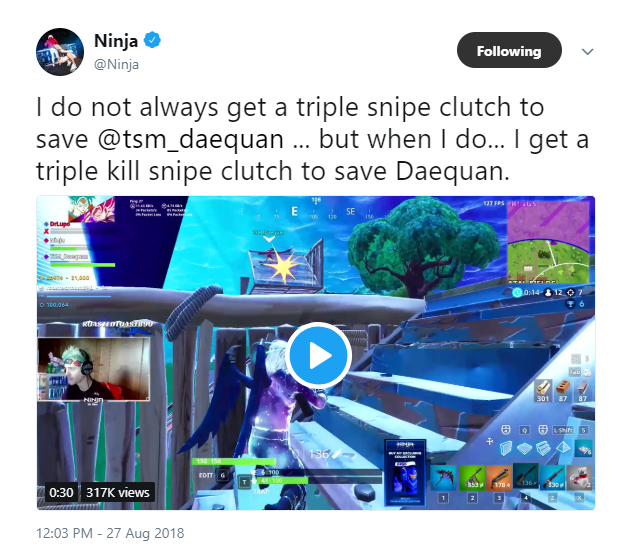