Season 4’s rocket launch was a major event for Fortnite fans, and it looks like another similar event is on the way for the conclusion of season 5.

Data miners, despite Epic Games’ best efforts to discourage them, have been busy digging through the game files from the recent v5.30 update.

On top of the exhaustive list of leaks, new items and challenges, a new event has been discovered called ‘Cube’, and seems to feature a rocket as well, similar to Season 4.

Within an events folder, six files have been discovered, all with the word ‘Cube’ included, the leak comes courtesy of FNBRLeaks. 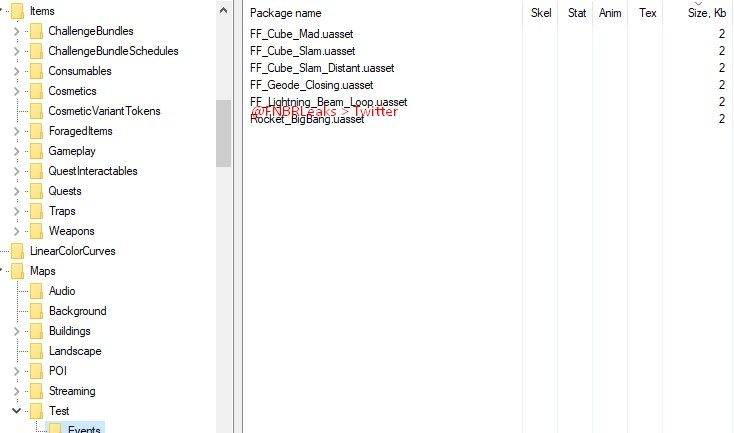 Files for the new ‘Cube’ event.

The very bottom file is called ‘Rocket_BigBang’ – which is a daunting name, and suggests something possibly related to season 4’s rocket launch is in the works.

At the time of writing however, this is the only information available on the Cube event, and it is wrapped in mystery, giving fans plenty speculate over as excitement for season 6 builds.

The other file names are equally as vague, but there is something to do with a lightning beam and a cube ‘slam’, so potentially a large object is set to land on the Fortnite map.

A video with all the sound files related to the Cube has also been posted to YouTube.

More leaks released earlier also indicated that the end of season 5 would be delayed, from what was initially set to be September 25, to now October 2.

In typical fashion, Epic Games are expected to have grand plans for the season’s ending, as they went all out with the transition from 4 to 5.

Their execution of these in-game events and mysteries has been flawless so far, and seriously contributes to the buzz around the game.