After concerns were raised about alleged stream sniping by a coach at a competitive Fortnite event on the November 24 weekend, Dexerto has come across exclusive footage of what appears to be FaZe Fortnite star Kyle ‘Mongraal’ Jackson receiving information from his coach during a competitive match.

Stream sniping is a common occurrence when battle royale games are streamed online. Most commonly, it affects popular streamers, who have resorted to using tricks like hiding their user name on stream or using a stream delay.

Pro player Bloodx went on Twitter on Monday, November 25, to allege that pro players had “coaches” on their call during matches in the week 4 European semi-finals of the Fortnite Champion Series, looking at the streams of other teams and calling out their locations to their players.

To put it bluntly, he alleges they were stream sniping and asks if this is considered cheating.

Is it okey to have people IN YOUR CALL MID-TOURNY having your "coach" call out where teams land, based off of what he sees on OTHER streams? AKA STREAMSNIPING for your team.

PLEASE voice your opinions, i know what my opinion is.@LRojo__ & others, is this ok?

Bloodx followed up his initial accusation by saying, “this is just something that isn’t f*****g right. No matter to what extent it’s done.”

Many fans and players responded that not only was the alleged stream-sniping considered cheating, but pro players shouldn’t have coaches on their call during a match, to begin with. This is a similar rule in other competitive titles like LoL and CSGO, where coaches can only talk to their players during timeouts and between matches. 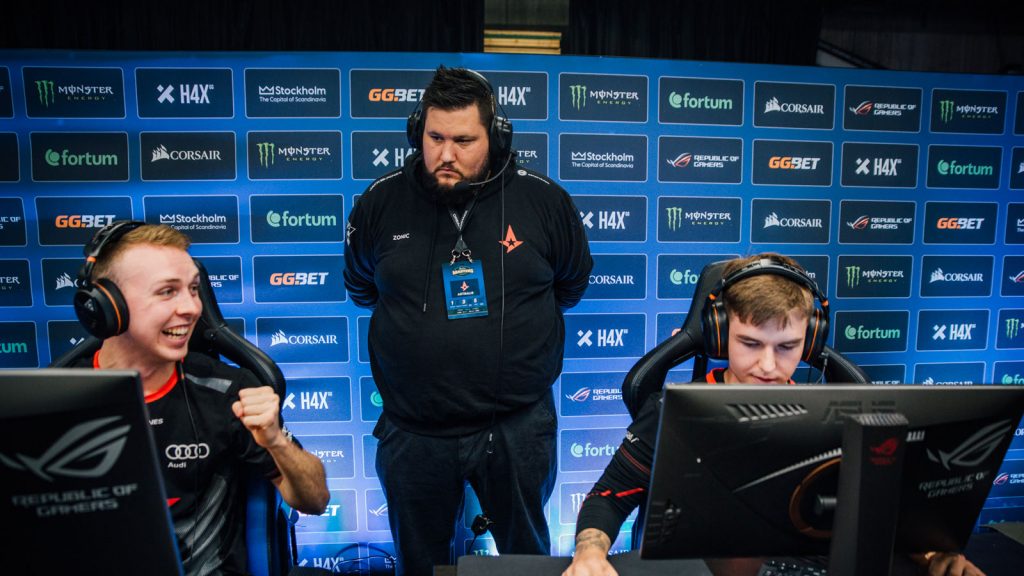 Famed CSGO coach zonic behind his team, Astralis. Rules prevent him from communicating unless between matches or during timeouts.

After some investigation, Dexerto has acquired a clip from an anonymous source, potentially showing Mongraal and his teammates getting information from coach DestinysJesus. The exchange between Mongraal and DestinysJesus comes after Mongraal exclaims that his team was “griefing” the other squad.

“Are they contested, Destiny?” replies Mongraal.

“They’re [not?] contested, they went Pleasant.”

The anonymous source who provided the clip also alleges that DestinysJesus was spotted in the chat of one of the streams he was allegedly sniping. As of now, there is no clip or evidence to verify this claim. DestinysJesus joined FaZe as a Fortnite coach this month.

Around the time the discussion appeared on Twitter and Reddit, Mongraal’s video editor shared a vague tweet, saying, “everything happens for a reason, can only stay hopeful at this point.”

Everything happens for a reason, can only stay hopeful at this point

The match where the alleged incident took place wasn’t live-streamed by Mongraal or any of the teammates he was competing with. All the members of his squad, NRG BenjyFishy, Nayte, and Lazarus Wolfiez, frequently stream their competitive events.

Mongraal was signed to FaZe Clan before the Fortnite World Cup in July, in a transfer from Team Secret.

He finished 13th in the Solo Finals at FWC, and sixth in Duos alongside Mitr0, who was playing for Team Atlantis. He’s come in first in several events since the World Cup, alongside Mitr0 and benjyfishy.

In the Competitive Integrity section of the Fortnite Champion Series rulebook published by Epic Games, it explicitly forbids:

“Receiving outside assistance regarding the location of other players, other players’ health or equipment, or any other information not otherwise known to the player by the information on his or her screen.”

The rulebook makes zero mention of coaches at all, so the issue of whether coaches are allowed or when they should be allowed to communicate with their players is still up to debate.

Dexerto reached out to Mongraal for comment on the allegations, but he has yet to respond as of press time.

Fortnite players have made big claims that Epic is leaking player logins through the battle royale’s in-game leaderboard. However, the developer has insisted the system is safe, and there’s been no evidence of hacked accounts through it.

Security scares are no joke, and while developers do their best to keep them underwraps, they can sometimes appear where you least expect them.

That’s what Fortnite pro Jonathan ‘Yung Calculator’ Weber was claiming after being mysteriously logged out of his account. The Built By Gamers player claimed Fortnite’s in-game leaderboards were leaking players’ private information, including email addresses.

People could then use these emails to either try and brute force hack accounts, or reset passwords and kick players out of the game.

“Guys, Epic Games’ infrastructure is so dogmeat that if you don’t have this turned off, people can find your email,” he said.

“That’s kind of bad on its own, but then if they have your email, they can send password resets to your account. That’s fine normally ⁠— on Twitter, it means nothing normally ⁠— but on Epic Games, it logs you out in-game.”

“This has happened to Clix, Nick Eh 30, Nate Hill ⁠— everyone. Epic Games has no idea what they’re doing. Their infrastructure is garbage. They need to change it ⁠— it’s disgraceful.”

However, people aren’t sold on Yung’s story. Fortnite dataminer ‘FNBRUnreleased’ has stated that it’s impossible. Epic’s API doesn’t allow for the sharing of information like Yung and others think.

“It is not possible to view the email of another person’s Epic [account]. Epic’s API does not work like that. I’ve been seeing this rumor from [Yung Calculator] spreading false information,” they claimed.

Want to tweet this out since some pros follow me. IT IS NOT POSSIBLE TO VIEW THE EMAIL OF ANOTHER PERSON'S EPIC. Epic's API does not work like that. I've been seeing this rumor from @yungcalc spreading false information

FNBRUnreleased’s standpoint has been backed up by Epic. The developer published a statement in response to Yung’s claims, saying leaderboards do not leak any players’ secure information.

“We investigated reports that leaderboards were divulging non-public information or causing unauthorized logouts. This is not the case.

We investigated reports that leaderboards were divulging non-public information or causing unauthorized logouts.

This is not the case.

For now, players should just always make sure their passwords are strong to best protect against any leak. Plus, turn on two-factor authentication if you can.