Leaked PCB Challenges in Fortnite might be a South Korea exclusive

It looks like the mysterious PCB challenges that leaked with Fortnite’s V6.22 update might not be available for players in all regions around the world.

While Fortnite players are well accustomed to the various challenges presented to them on a weekly basis, the newest set of challenges to leak were quite the head-scratcher.

Most challenges only pertain to things that can be done in-game, but the PCB Challenges looked to have players play Fortnite at “a participating PC Cafe,” making them incredibly unique to Fortnite.

Thanks to Reddit user ‘DrillDriver,’ however, new light has been shed on just what’s up with these brand-new challenges.

It turns out that the sign on the side of the new Keyboard King store says ‘PC방,’ which is the name of a chain of Korean PC gaming cafes that translates to ‘PC Bang.’ 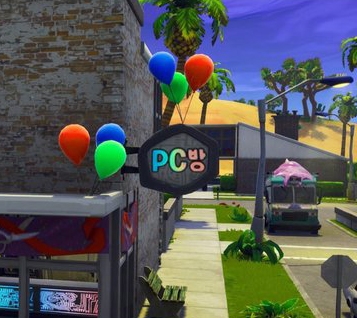 As DrillDriver explains, Fortnite hasn’t yet been released in South Korea and is set to release on November 8, which could make this one elaborate tie-in for new players in South Korea.

Adding further credence to this theory is a marketing campaign spotted in South Korea that features actor Chris Pratt.

While in South Korea for the League of Legends World Championship, Darin Kwilinski, Senior Editor of ESPN Esports, caught a glimpse of the campaign by way of a sign on the side of a bus.

Wait are we getting a @prattprattpratt skin in @FortniteGame???? pic.twitter.com/EmupzaSHq0

Additionally, DrillDriver took to a different Reddit thread (that has since been deleted) to translate a TV commercial featuring Chris Pratt that explains the special event.

Given that gaming cafes aren’t very common in many areas of the world, this could all very well point to the PCB challenges being a collaboration with the gaming cafe chain to celebrate the game’s release in South Korea.

Of course, none of this has been confirmed by Epic Games, but with the event reportedly due to kick off in a couple days, the wait for official confirmation shouldn’t be too long.