A new weapon has been found in the files of v9.40 update already introduced some new guns for Fortnite fans to wield, with Epic and Legendary variations of the Tactical Shotgun included in the July 17 patch.

It appears that Epic Games aren’t finished there though, with data miners who are scouring through the update’s files coming across a brand new long range weapon that looks set to pack a punch.

Data miner @FortTory has found some information related to the weapon, but its purpose remains unclear, as Fortnite already has a number of sniper rifles in the game and brought back the Bolt-Action Sniper in the v9.40 update.

The Storm Scout Sniper Rifle comes in two rarities, Epic and Legendary, and will deal 81 or 85 damage-per-shot respectively, regardless of distance. The weapon will fire one bullet-per-second, and will hold six Heavy Bullets at one time. 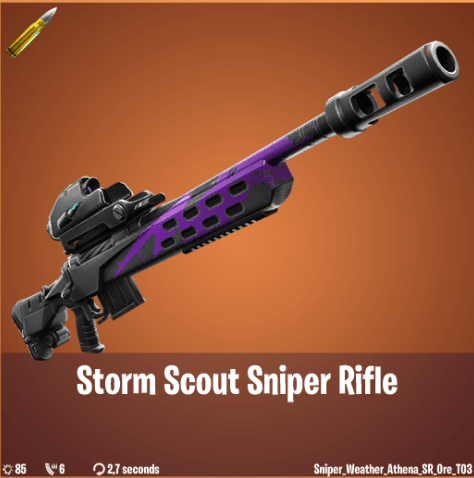 The Storm Scout looks different from any other sniper rifle in the game, with purple paint in the form of a lightning bolt on a side, and a strange sight that is unlike any other weapon.

Data miner @Lucas7yoshi has uploaded a clip of the weapon in action, which appears to show that a small minimap appears in the bottom-left corner of the scope, and also seems to show the direction from which the storm is coming.

The leaker claims that the weapon has 100% accuracy when not scoped in, but it remains to be seen whether than remains to be the case when it officially goes live.

has 100% accuracy when no scoping

the storm part of it is a bit wack cause of the fact its on creative pic.twitter.com/zkPPiweaLp

There is currently no official release date for the weapon from Epic Games, but it’s likely we will see it in the v9.50 update, which is expected to go live next Wednesday on July 24.